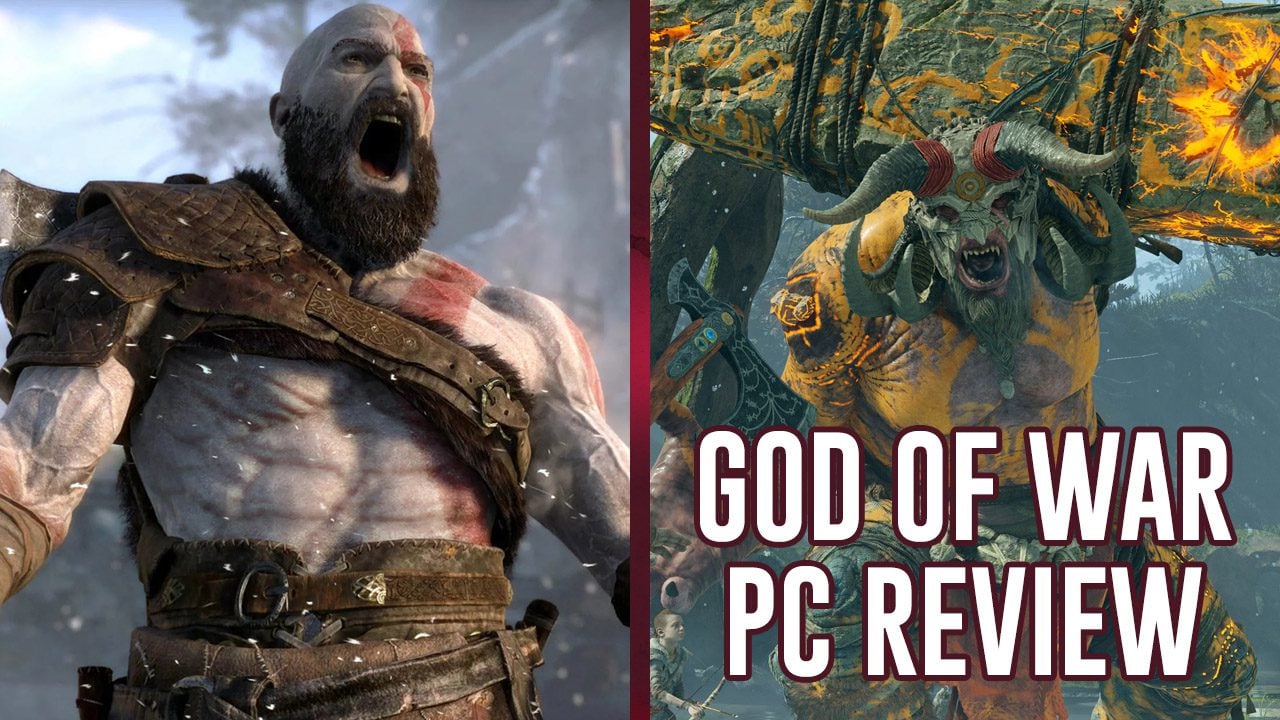 As part of PlayStation’s initiative to expand its library beyond its own consoles, 2018’s God of War has received a sudden but welcome port to PC platforms. As someone who enjoyed the original series back on PS2 but had never had a chance to check out the soft reboot on PS4, this was an opportunity to catch up with where the series is ahead of its new sequel arriving later this year.

Set in Midgard, the Old Norse name for Earth, God of War takes the series from its Ancient Greek setting to one inspired by Norse mythology. It’s complete with the Nine Realms, old gods and monsters, and many more world details associated with that mythology.

While this new God of War is intended to be a soft reboot for the series, it doesn’t ignore the past games. Prior knowledge of Kratos and the previous God of War titles isn’t crucial to understanding this game, but it certainly helps for you to read a quick synopsis of the original trilogy.

The story begins with Kratos, the former titular God of War, and his son Atreus journeying to the highest peak in the Nine Realms to scatter Kratos’ wife’s ashes after her death which precedes the game’s beginning. On their journey up the mountain, they also encounter old monsters and gods of the Norse world.

If you’ve played any previous God of War game, you’ll know the series has always gone heavy on the themes of family, betrayal, love, loss and vengeance. Meanwhile God of War (the newer one, blimey this naming convention gets confusing doesn’t it?) sets Kratos on a path for redemption.

As such, the intimate performance of its actors is crucial. Christopher Judge and Sunny Suljic, playing Kratos and Atreus respectively, deliver their performances with the powerful, authentic, and personal throes of a believable father/son relationship. The standout feature of God of War is seeing these two grow, both as individuals but also together, over the course of the game’s running time. And without those strong performances in the first place, the story would simply fall apart.

While many people will have already played this iteration of God of War when it first released on PS4, its new expansion to PC platforms opens up the series to a whole new audience of people. I’m one such person, having played the older titles back on PS2 but had never caught this new reboot.

With this comes some major changes to the God of War formula. The fixed-camera perspective from the older titles is replaced by a third-person over the shoulder perspective. Technical improvements have resulted in enhanced graphics, animations and effects during gameplay, and this change in perspective allows these enhancements to be further emphasised.

Likewise, with God of War emphasising the performances of its leads and the emotive tone of its script and performances, the closer perspective to Kratos allows you to feel much closer to the characters and their development. It was clear by the end of God of War 3 that a change like this was needed, and it ultimately pays off as a new way to separate the new Norse storyline from the older Greek titles.

AXE ME A QUESTION

Meanwhile, Kratos gets a new toy to play with. The Leviathan Axe is a large elemental weapon infused with magical ice abilities, and may perhaps be one of my favourite melee weapons in an action RPG. You can use this weapon to slice and dice through enemies, upgrading it using runes and other pickups on your journey. But you can also throw it as a ranged weapon to attack from afar, and magically recall it back into your hand. The whole thing reminds me a lot of Thor and his magical hammer, Mjölnir (and indeed, the axe recall feature was even inspired by a certain Marvel character of the same name). Overall, it just feels really cool to crack enemies’ skulls apart with this baby.

Of course, it wouldn’t be God of War without also being able to count on combo attacks and other powers. Ultimately, you’re able to combine your regular attacks with other weapons at your disposal. You can enter Kratos into unarmed combat, have him use a shield, and even use runic abilities to bring about more powerful attacks. How you use these together is up to you, but with enough items at your disposal there are definitely many ways to customise your Kratos into a weapon how you see fit.

Atreus will also assist you in combat, offering aid in the form of ranged archery to distract enemies and deal a little damage of his own. It seems God of War has learned that players really hate escort missions where your companion is vulnerable (and rightly so, they suck), so Atreus’ involvement can be seen as more of another weapon to use during combat rather than a person you need to babysit. It does perhaps interfere with the themes of the story, with having Atreus be practically invulnerable to nearly all enemy attacks, but does make some of those harder combat encounters much more palpable.

Now let’s talk about the world. God of War’s interpretation of Midgard and the Nine Realms is shiny, colourful, and expansive. You spend a majority of the story in Midgard, attempting to reach the highest peak on the mountain in the centre of this realm. However, the story will occasionally splinter off into new dimensions, which are each connected via the mythical Yggdrasil tree.

This provides a reasonable method of throwing new biomes and environments at you periodically. It also serves as a good lesson in how to set a mood. For example Helheim, the icy land of the dead, features intense empty spaces and tormented frozen landscapes. For a place that serves as an eternal resting place for those who die ‘dishonourably’ – according to Norse ideals – it’s clear that a lot of care and attention went into perfecting how the reality of the land is reflected through its visuals. Similar care is taken to the other realms too, such as Muspelheim’s volcanic, fiery exterior and Alfheim’s colourful flora.

Some of these realms are optional, not appearing during the story, and instead opt as bonus challenges to do after you’ve completed the game. One realm is basically a series of difficult trials, while another is more of a roguelite. These experiences are different in your approach to them, but they offer new challenges and opportunities not seen in the main story. This also extends to the much-dreaded Valkyrie boss fights, enemies of great difficulty which require you to adapt to their fighting style and prepare for long, drawn-out battles.

Overall, this extra content is a good way for Santa Monica Studio to flex its creativity by bringing in new gameplay features and formats that don’t mould well with Kratos and Atreus’ journey. It’s a shame that you can’t visit all nine realms – as some are intentionally locked off by Odin due to, I guess, developer time and resource constraints – but there’s enough location diversity to encourage a long playthrough.

However, the fact this content isn’t recommended to be attempted until after you beat the main story can leave a sour taste. A lot of the bosses during the game can feel repetitive and easy (you encounter the same kinds of trolls and ogres at least a dozen times), which makes that difficult endgame content all the more enjoyable. However, it also means you’ll be playing for 15-20 hours before the gameplay even begins to feel lucrative. If the story doesn’t reel you in immediately, neither will the combat.

These aspects also lose their strength when you realise traversing the world can be frustrating at times. You don’t unlock fast travel until late in the story, but even then the system God of War provides you with feels cumbersome and slow. It works well with the lore of the game, but if you’re mopping up collectibles and other miscellaneous tasks it can be quite unwieldy to reckon with.

HOW’S IT PLAY ON PC?

But on the technical side of things, much like Days Gone before it, God of War is a solid PC port. It ran flawlessly on my machine (hardware specs are listed at the bottom of the review) at both high resolution and high framerates. The port also features higher resolution shadows, improved screen space reflections, and the addition of GTAO and SSDO which allows environments to pop out much more strikingly. And finally, Nvidia DLSS support also allows weaker hardware to hit higher framerates and resolutions with virtually no loss in quality. Basically speaking: it looks incredible.

There are also new accessibility features, such as being able to keep sprint and the centre aim reticle always on, as well as full keyboard and mouse rebinding. As someone who always has to change the keybinds in every new game he gets, it was nice to see how deep this amount of customisation went. Likewise, the actual conversion from gamepad controls to keyboard and mouse also feels wholly appropriate, and not awkward at all.

This is also in addition to already-existing accessibility options such as the ability to tweak quick-time and button mashing events. God of War intends to be an accessible experience, and succeeds in giving you options to tweak that experience.

for a new audience

If you’ve never been a PlayStation gamer and are experiencing God of War for the first time with this PC release, there are many references that may catch you unaware. Kratos’ backstory is important to knowing a bit more about his actions in this game, so it’s a shame that those earlier titles are currently unavailable on the same platform. However, going into God of War as a complete newbie is also perfectly fine as the story does enough to separate itself from those that came before.

God of War is a narrative gem. What it lacks in pacing and agency, it more than triumphs in writing, acting, and directing. What it results in is a deeply emotive story about a familial relationships and the ties that bind us. With a sequel just around the corner, now is the perfect time to get into this series. As part of Sony’s directive to bring more of its beloved franchises to PC, I’m glad it settled on one of the PS4’s most popular titles.

A free copy of God of War on PC was provided by Sony Interactive Entertainment (SIE) for review purposes.