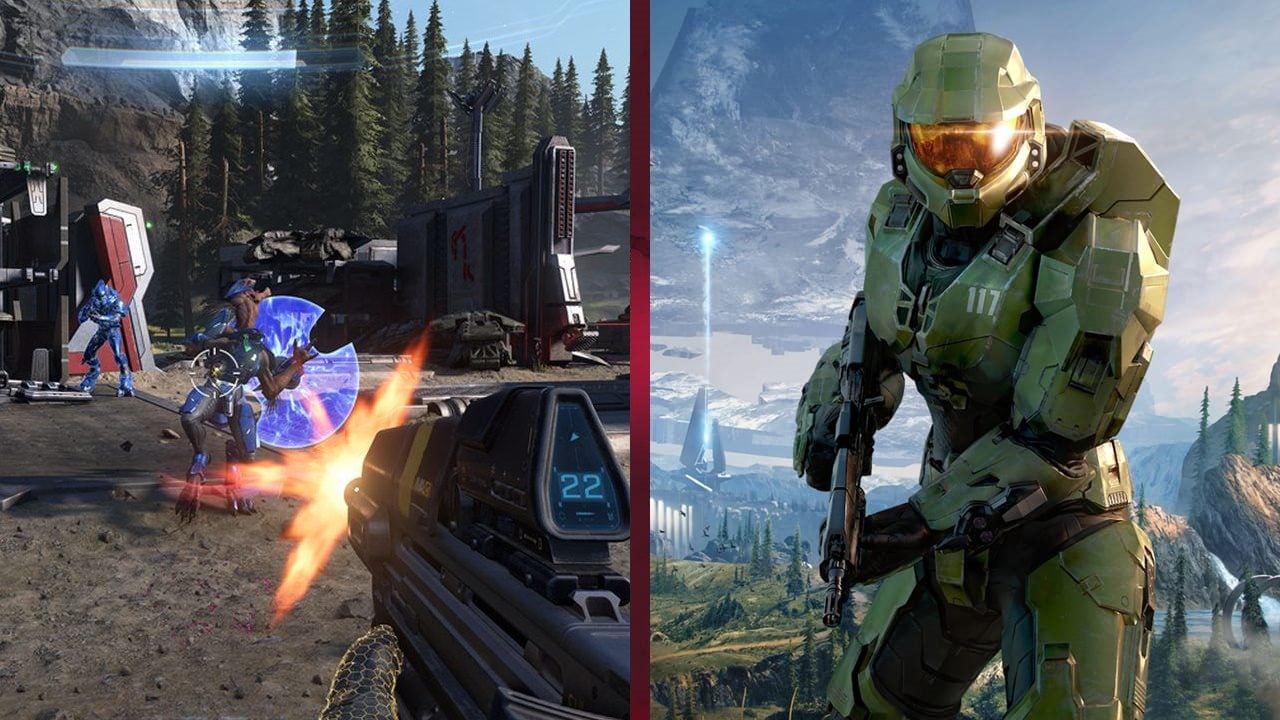 Following a rocky 12 month journey to launch, Master Chief has finally returned to our screens to continue the epic Halo saga in the Halo Infinite campaign.

With the multiplayer component releasing early a few weeks ago, we already knew the sort of excellent sandbox gameplay to expect. Infinite delivers on that in spades, and the narrative it proposes is promising in scope. However, pacing issues and friction with the game’s structure prevents Halo Infinite from reaching its full potential.

Since you’ve been gone…

A lot has happened since we last saw the Chief at the end of Halo 5: Guardians. Much of the timeline is unbeknownst to the player as Infinite picks up 6-months after a catastrophic attack on the UNSC. The mercenary faction known as ‘The Banished’ completely wiped out the Infinite mega-ship, taking out the Master Chief in the process. A lost UNSC pilot eventually picks up our guy in green floating suspiciously close to a new Halo, known as Zeta.

This is the setting where you’ll be spending all of your time during the Halo Infinite campaign. The Banished have taken over the entire ring in search of its darkest secrets. It’s up to you and your newfound AI companion, known as ‘The Weapon’, to figure out what’s been going on over the last few months and stop whatever it is the Banished have planned.

Halo Infinite appears to be a soft reboot for the series. It’s certainly far different from anything that we’ve seen from 343 in the past. However, don’t be fooled into thinking you can jump into this story without any prior knowledge of the series. Infinite has narrative threads that date back to Halo 5: Guardians and Halo Wars 2. As someone who hasn’t played either of those two titles, I certainly struggled to keep up with what was going on at times.

Halo Infinite starts out extremely strong with a few linear levels harkening back to the days of old. It’s the Master Chief running through alien corridors and blasting them to bits with funky weaponry. The unchanging Forerunner and Banished architecture can be repetitive at times, but a feeling of nostalgia puts those thoughts aside.

Enhancing the formula this time around is the Grapple Shot, a grappling hook gadget that you are given from the very start. With a lengthy 50m range, this equipment opens up a wealth of opportunities for you to get creative with. You can swing around environments like a hulking metallic Spider-Man. Alternatively, you can pull items like weapons or fusion coils towards you from afar. Some enemies even interact uniquely when grappled – Jackal shields especially are far easier to deal with.

The new equipment joins a completely overhauled arsenal of weapons, all of which are incredibly fun to utilise. As you will know from the Multiplayer, you now have four different types of damage to reckon with: Kinetic, Plasma, Shock, and Hard Light. You can swap out weapons to appropriate foes, forcing you to think on your toes in the heat of battle. Ammo resupply stations and constant weapon drops never leave you feeling defenceless, always able to finish the fight.

You’ll also see plenty of familiar enemy faces with Grunts, Jackals, Elites and Brutes making up the majority of your foes. Sadly, there are fewer new additions to the enemy types you face. A couple of unfamiliar ones appear later in the game, but Infinite would have benefitted from some evolution in this regard.

Not too long into the story,  you’re introduced to the open-world structure of Halo Infinite. 343 has said previously that it doesn’t like to think of Infinite as being open-world, but that’s disingenuous. The Zeta Halo is broken up into several massive chunks, all of which can be fully explored at your own leisure. There are UNSC outposts to retake from the Banished, collectibles to find and high value targets to eliminate.

Completing these side activities will earn you valor, fast travel points, and even multiplayer cosmetic items. Some of them are worth completing – capturing FOBs is quick and easy to do, and they provide you with a place to fast travel and spawn new weapons and vehicles. Spartan Cores are also worth chasing as these upgrade your equipment.

However, beyond these foibles, the Zeta Halo isn’t something I found myself excited to explore. The rest of the side objectives only serve to unlock better weapons and vehicles, but you swap out for enemy weaponry so often that there’s rarely a need for an upgraded arsenal. In any case, the most fun way to traverse is with the Grapple Shot. A superb low cool-down timer means you can zip around the map at quite the pace.

Another issue with the open world is that it’s rather bland. The verdant plains and lush pine forests of the Zeta Halo are pleasant enough to look at for a few hours, but the landscape does become samey and repetitive after a while. I was waiting for Infinite to take me to a more diverse part of the ring for ages – alas, it never happened. The visuals of the Halo Infinite campaign aren’t going to blow you away, but they do look modern enough to receive a pass.

A few of Infinite’s main campaign missions take place in the open world, with the rest sectioned off into linear segments. Sadly, it’s these open world missions that demonstrate Infinite at its weakest. Objectives are often repeated cases of “go here, wipe out the Banished, press a button”. There’s scope to get creative with how you defeat your foes, but it’s not something that the open-world is directly accountable for.

The premise of Infinite’s story becomes infinitely more intriguing as the game progresses, but it sadly ends before it’s given time to breathe. Especially in the early game, I struggled to feel completely attached to the story. Infinite relies on curiosity as a narrative pull with many of your goals revolving around chasing shadows. Much of the story is told via flashbacks, audio recordings, or intergalactic FaceTime calls. As a result, you never truly feel a sense of urgency or overarching threat.

This all does start to ramp up in the closing hours of the game. I can recall several moments where the high octane gameplay, an impending and compelling objective, and an incredible soundtrack brought on a wide grin and genuine tears of joy. Infinite absolutely has the potential to deliver a Halo experience in its purest form. It’s just a shame that those moments are back loaded and rare.

Right when the Infinite story begins to show interesting promise, the credits roll. Lots of possibilities are posed, plenty of questions left unanswered. I get the distinct impression that what we’re seeing here is the first chapter in a much bigger story. 343 has expressed that this will be the last new Halo game for a while. I strongly suspect that it intends to supplement Infinite with new chapters later down the line. Subsequent expansions of this story have the potential to be spectacular. As it stands, Infinite’s campaign is less about finishing the fight and more about seeing the start of one.

Is The Halo Infinite Campaign Worth Your Time?

The core gameplay loop of Infinite is an utterly fantastic distillation of what makes Halo great. The physics-based combat is drastically enhanced by the upgradeable equipment. When everything flows together, it’s excellent fun. All of this translates especially well to the multiplayer, which we’re reviewing separately.

The promising story has a lot to give fans with the deepest knowledge of the series. It’s sadly difficult for more casual fans to follow along, and tails off before delivering a satisfying payload. There’s hope that 343 can expand on this in the future, but that remains to be seen.

The open world structure doesn’t compliment what makes Halo Infinite great as much as I’d like. Beyond upgrading a few equipment items, I felt no real desire to fully explore the Zeta Halo. Infinite invites you back into the open world to tie up loose ends once the credits roll, but I don’t feel particularly compelled.

Overall, the 16 hours I spent with the Halo Infinite campaign certainly had dull points. However, sheer thrill shines through at several points, proving that there’s still life in this 20-year-old franchise. It’s now up to 343 Industries to keep it that way.

Code was sent to GameByte by Microsoft PR for review purposes.