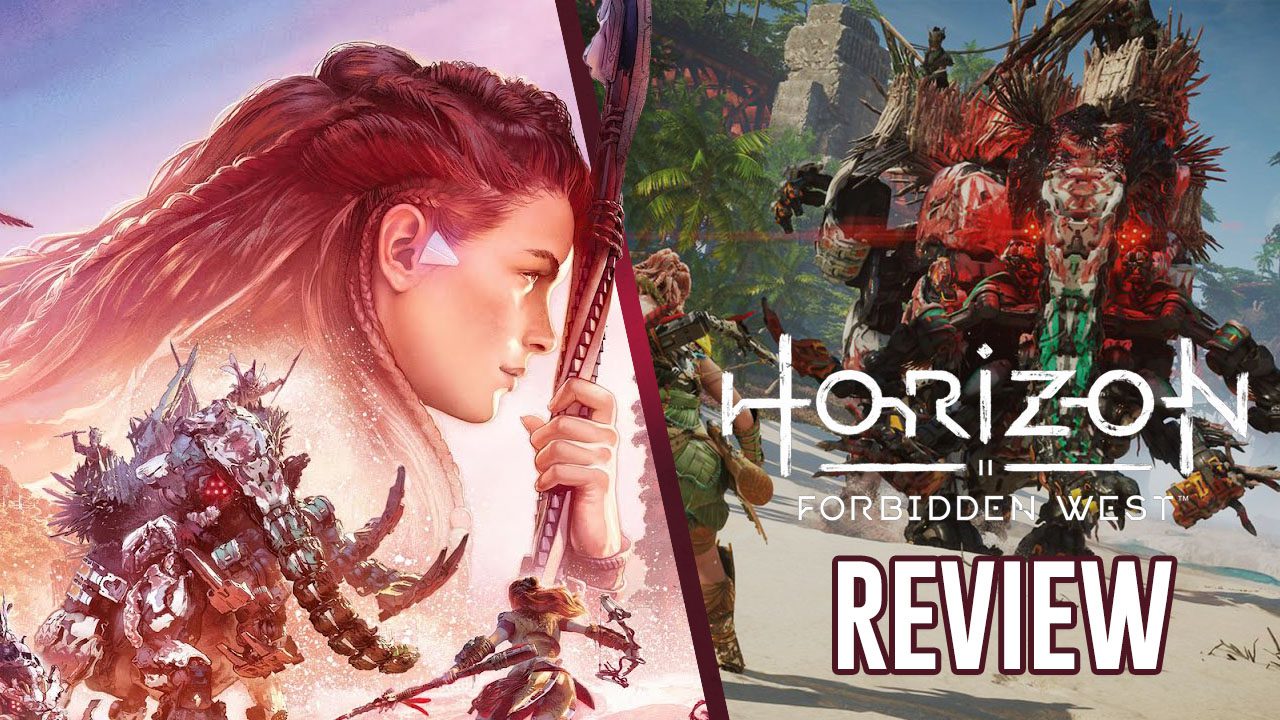 I reflect upon Horizon Zero Dawn in a fond, but almost pitiful manner. Released in March 2017, the comparison with Breath of the Wild was inevitable. For a studio that had never made an RPG before, though, Horizon Zero Dawn was an impressive attempt for a team still cutting its teeth.

Now, Horizon Forbidden West continues the journey of Aloy into the uncharted territories of the post-post-apocalypse. With little other competition in its wake, I’m glad that the Horizon series finally has its moment to shine in the spotlight. Forbidden West is a triumph for Guerrilla Games – better in every way, it feels like the RPG that the studio always wanted to make.

Picking up the pieces

You didn’t have to do much to entice me back into the gorgeous world of Horizon. Uncovering the events of the past was an exhilarating task in the first game, but the open ending left much still to be explored. That’s where Forbidden West picks up as Aloy is continuing her quest to find a way to fix the biosphere.

As the protagonist, Aloy is the vessel that carries us through our quest for discovery. She was a delight to watch develop in Zero Dawn, who continues to shine in Forbidden West. Her confident, no messing around attitude garners a range of responses from the friends and foes you meet along the way. It’s a joy to watch her approach each new situation and see how she tackles it.

Aloy, and much of the supporting cast, are realised in stunning new detail on the PS5. Zero Dawn fell down greatly in some of its motion capture and voice over departments, bordering on cringe-worthy at times. That’s a thing of the past in Forbidden West. Granular detail on character faces, complimented by excellent lighting means that characters look and feel more alive than ever before. Some cutscenes had me in genuine awe as they approached the uncanny valley territory.

The world of Forbidden West is brought to life with its excellent photo mode, with which the possibilities are endless. I had immense fun messing around with character poses and facial animations. It’s an implementation that you can tell the developer had fun creating too.

From shooting pics to dinos, the combat of Horizon was always its strongest point. Scanning enemies for weak points and tearing them down bit by bit brings a methodology to what would otherwise be an arrow-sponge fest.

Those mechanics return and are improved by an increased arsenal of weapons and gadgets. Items like spears and vertical traps give Aloy new opportunities to take down the plethora of new enemy types. Those are all enhanced further by an incredibly deep skill system which ties the whole game together. Swapping between weapon types and ability subsets within them makes for the most engaging combat system I’ve ever seen in an open world game.

It helps that Guerrilla Games has gone out of its way to ensure that there are new enemy types for returning players to enjoy. It was probably around 5-6 hours in before I spotted a robot that I actually recognised from Zero Dawn. Right from the word go, you’re engaging with brand new opponents, all of which require their own strategies to take down.

Let’s talk about that progression system. Forbidden West has a number of skill trees, all of which have at least 25 levels within them. These are unlocked with skill points, some of which cost up to two or three further down the tree. This appears daunting to begin with, but you quickly learn that Forbidden West will constantly reward you for all of your actions.

Aloy has an overall level which increases by earning XP. That’s gained by completing quests and defeating enemies – your typical RPG affair. However, completing main and side quests also award you with cold, hard skill points. This means that the days of completing a side quest for minimal returns are over. Everything you do in Forbidden West, no matter how small, is usually worthwhile.

That extends to the inventory system which seeks to punish you as little as possible. You can carry a decent amount of equipment with you, and any additional resources you scavenge are sent straight back to your stash. Running out of ammunition is rarely a problem as crafting new arrows is a cheap affair.

The result is that Forbidden West lends itself to whatever playstyle you’d like to adopt. I would often jump on for a quick half an hour at lunch, meaning I only had time for a quick side quest or some light resource scavenging. This always felt worthwhile and let me progress through the skill tree a little further. It’s delightfully refreshing and always kept me coming back, even though I knew there was a long 60+ hours left ahead of me.

Power of the PS5

Forbidden West is releasing on both PS4 and PS5 hardware, but it’s the latter where it really shines. I’ve already mentioned that the world is utterly stunning, but what’s more impressive is that it loads seemingly instantaneously. Even fast travelling from one side of the huge map to the other is no sweat for the PS5. It’s a feature that shows up in other games too, but it still blows my socks off every time.

Just like most modern games, you can run Horizon in either a performance or resolution mode. One targets 60 frames per second while the other 30 at a native 4K resolution. I personally found that playing at 60 is the way to go as it makes aiming at weak spots much easier than before. The frame rate remained mostly consistent aside from the rare drop, and the lower resolution in performance mode is barely noticeable.

As always, DualSense really comes alive in Forbidden West. The triggers adapt accordingly to each new weapon or equipment you pick up, making for a delightfully tactile experience. That even extends to actions like opening doors or igniting flames. Add in the haptic feedback while careering through the world on your pet robot and the world of Horizon has never felt more alive.

Is Horizon Forbidden West worth your time?

Asking if Horizon Forbidden West is a big question given its extraordinary amount of content. Know that if you want to see everything this game has to offer, you’re in for the long haul. That’s not a slight on Forbidden West at all. I felt truly enthralled in what the main quest had to explore. Side quests worked flawlessly to flesh out the engrossing lore and world-building.

Horizon Forbidden West is a triumph for Guerrilla Games. It takes the shining promise of Zero Dawn and elevates it in almost every way possible. This truly feels like the RPG the studio has always wanted to make, and I’m so glad that it finally gets to breathe without being overshadowed.

A copy of Horizon Forbidden West on PS5 was provided by Sony PR for review purposes.