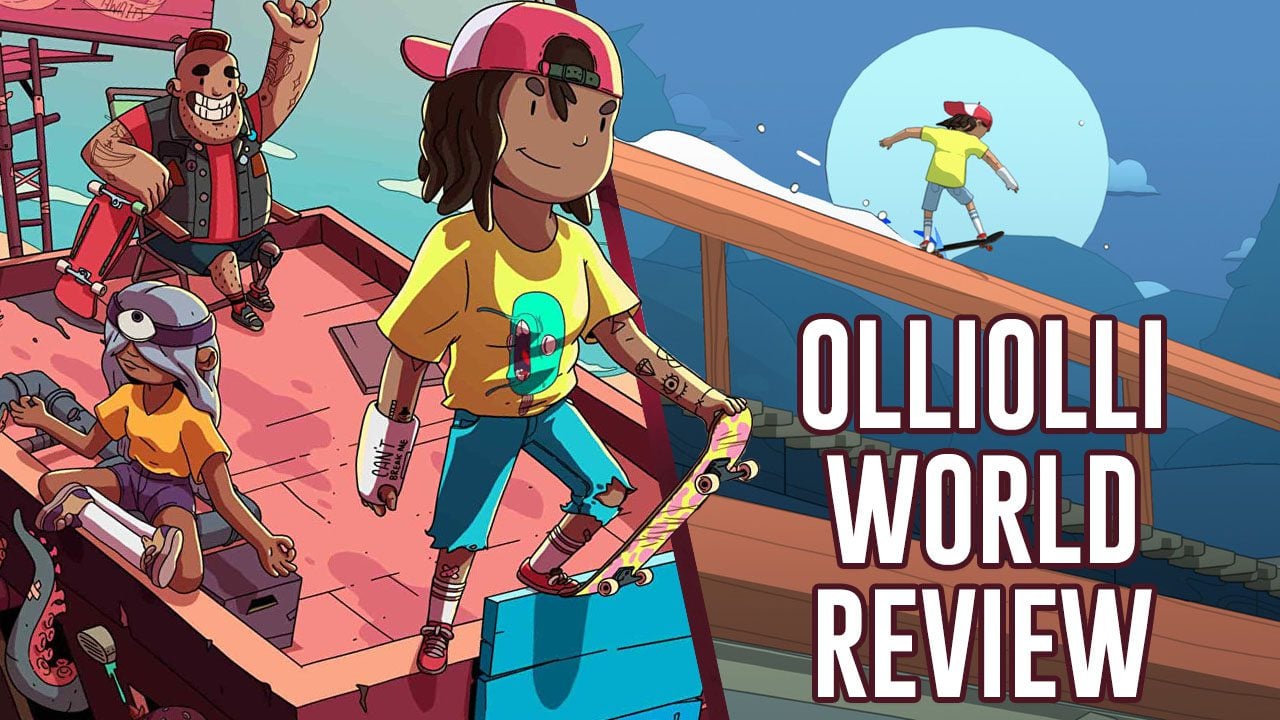 When it comes to creating a bigger, better sequel to a game, how do you improve on something for a wider audience while still retaining the original vibe that made it fun in the first place? The original OlliOlli games were inexpensive arcade platformers that became popular on the PlayStation Vita. But when it came to making a sequel that would reach more people across new platforms, developer Roll7 knew it had to go back to the drawing board. That’s where OlliOlli World comes in.

It’s set in the world of Radlandia, a land of skating legends and cool characters. You fall in with a new crowd consisting of Suze, Dad, Gnarly Mike and Chiffon, the four skaters who join you in your mission to discover the legendary skate gods and find ‘Gnarvana’, a place of ultimate skating power.

The main thing I enjoy about OlliOlli World is its dedication to standing out from the other skateboarding games of today. SkateBird and Tony Hawk’s may be enjoyable in their own right but OlliOlli World goes for a more old-school approach. It’s not a skateboarding game, it’s a platformer where you get from A to B via a board. This alone made it more interesting to me, for several reasons.

To start with, the game utilises a Super Mario Bros 3-style overworld where you progress through a series of stages linked together by an overarching narrative. This opens the game up to have more fun with its narrative and structure. You’re more likely to keep pressing on through each world when the levels are bookended by fun dialogue exchanges with your group.

This feels more engaging to me as the gags and quibbles between the four characters are fun to watch unfold over the course of the game’s 5-hour playtime. Suze, Dad, Gnarly Mike and Chiffon each have their own personalities, goals and philosophies about skating that grows on you exponentially throughout the story. It’s actually surprising how much care was taken into making these characters fun to interact with. Their characterisation doesn’t necessarily go deep, nor is it too authentic; but as caricatures they work perfectly together.

you are who you are

Unfortunately, this doesn’t extend to your own character. They’re more of a blank slate, an avatar to represent your journey to Gnarvana. The rest of the gang will acknowledge your presence, and you can make a few limited gestures during conversations, but otherwise you’ll be left to fill in the blanks about them.

When you first open OlliOlli World, before you even start skating, you’ll be greeted by a customisation screen to let you build your own skater. You can change their hair, face and body to whatever you like. The amount of items here lets you create an avatar that truly represents yourself, or an ideal of yourself, in whatever way you wish. You can make them unique to your personality, appearance, and style.

Gender options don’t exist here, but physical features can be changed with their own sliders and options. Other characters always refer to you with they/them pronouns too. When it comes to designing decent gender options in games, you can go all-out with a plethora of customisation that fills the entire gender spectrum. Or you can go the other way and make it more minimal, which therefore allows players to fill in the gaps themselves. Regardless of which approach you prefer, it’s a much better system than the traditional “Man/Woman” binary choices of gaming’s past.

If you’ve played the older OlliOlli games then there are some big changes here too. Now that the game isn’t being designed for PlayStation Vita, the controls are much more expanded. It takes advantage of the capabilities of modern controllers, with the extra face buttons, thumbsticks and triggers playing their part in providing a smoother experience with combos and skating tricks.

Meanwhile, Roll7 has abandoned the pixel art graphics style and swapped over to a soft cartoon aesthetic. Not only does this make the game feel modern and higher budget, it also allows more detail to come through that pixel art can’t achieve. It’s an understandable move, as it lets the characters’ expressions be more explicit, and is simply more fun to look at.

The move to 2.5D also creates more interesting levels. While your ultimate goal is to travel left-to-right towards the end of the stage, there are alternative routes that veer off behind or in front of the main track that you can detour onto. Sometimes these provide new ways to reach the end, but others allow you to find hidden content, new characters, or allow you to extend your combos to rack up more points.

OlliOlli World also prides itself on being the most accessible title in the series to date. The move to softer graphics doesn’t just make everything clearer to see, but controlling your skater is also a lot simpler. The game has a complex variety of moves and combos, which you’re encouraged to use as you wish.

However, you can actually get through each level from start-to-finish without worrying too much about those more complicated movesets. The game can be beaten by using only a couple of combos, which is great for anyone who has difficulty getting some of the higher-end combos to work.

Finally, let’s talk about Gnarvana – which is OlliOlli World’s best feature for those who have beaten the story. Gnarvana is the open-ended game mode you unlock at the end of the first world, and continue unlocking new features as you progress through each subsequent world.

It’s a mode where you can adjust the skill level, length and biome of a procedurally generated skate track. Using a unique code, or combination of different settings, you’re given access to a seemingly endless number of tracks to play through that are changed up daily. There are also featured tracks that rotate on a seasonal basis, with which you can compete against others to reach the top of a leaderboard.

This adds a tonne more variety to your game as you log in each day to beat the newly rotated tracks, aiming to beat either your own score or those of other players. While the main story has enough side missions and other bonus content to keep you going back to those old levels, Gnarvana is what will come to be the game’s best definition. Its unpredictable nature makes it a great challenge for those looking to flex their skills, and it’ll serve as a great piece of extra content for the community to rally around.

All-in-all, OlliOlli World’s visual style, fluid controls and accessible flow make it a fantastic entry to the platformer genre. Abundant in personality, it was obvious that taking some time out to create a worthy sequel has paid off for Roll7. Fans will adore it.

A copy of OlliOlli World on PC was provided by Bastion PR for review purposes.

For full transparency, OlliOlli World and GameByte are currently in a partnership on a separate project. With this in mind, we made sure to keep our reviewer separate from the project.