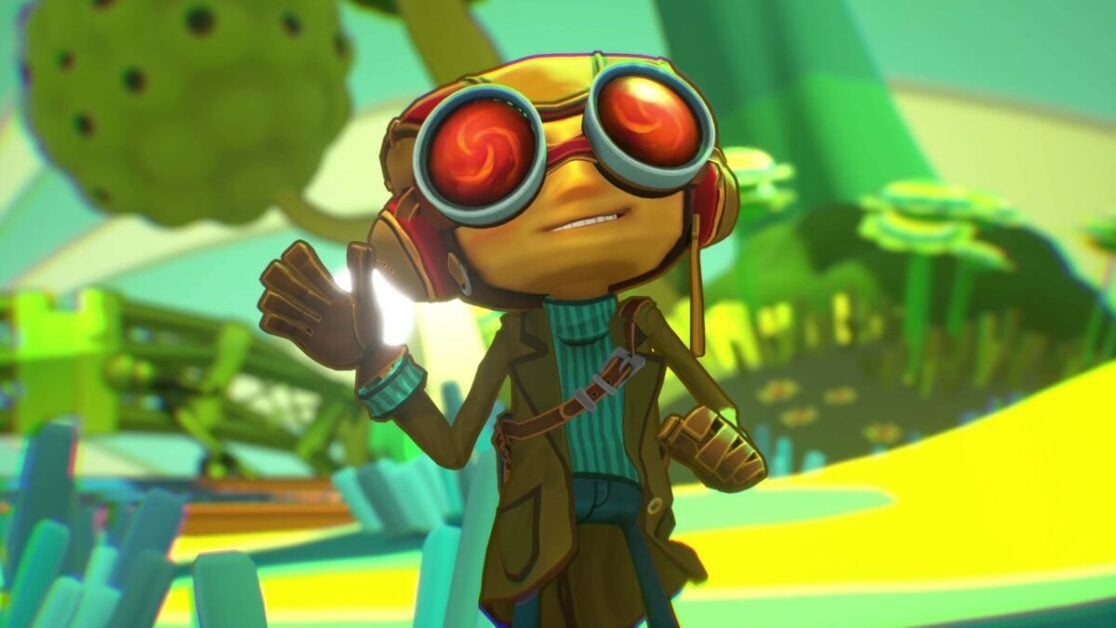 A sequel to the cult classic ‘Psychonauts’ was always going to be tricky. The original is lauded as a generational must-play by its fans. Clearly, Microsoft saw the potential in a sequel with its acquisition of Double Fine in 2019. The resulting partnership is a game that encapsulates everything that made the first game beloved in a mighty lick of modern paint. Double Fine strikes twice with another stylish outing that stands on its own while complimenting its heritage.

Psychonauts 2 picks up right where the first game left off. You play as Razputin Aquato, a likable fellow that ran away from the circus in pursuit of mastering his psychic powers. Those who played the first game will have experienced Raz’s training journey. He’s able to use a plethora of powers to manipulate the world, and people, around him.

The biggest gameplay draw of Psychonauts is the ability to explore the consciousness of other character’s minds. It’s in these pocket universes that the game can go truly wild with both its gameplay and level design. Psychonauts 2 understands this from the get-go and teases players with a taste of what they can expect in the very first level. It’s an excellent primer for both new and returning players. It teaches them the basics of combat, exploration, and the sort of themes that the story will deal with.

Without delving into spoilers, the narrative tasks Raz with uncovering the real mastermind behind the dark plot of the first game. From there, Raz discovers evil lurking in the background and must investigate the minds of several other characters to get to the bottom of it.

Though Raz had a character arc in the first game, that doesn’t make him an all-perfect, shining beacon of righteousness in the sequel. He makes some pretty serious mistakes early on in the story, through which the player is an active participant. However, you can see that Raz learns from these shortcomings and makes a genuine effort to better himself throughout the rest of the story.

There’s an intriguing mystery at the heart of the story and plenty of twists and turns to keep you actively engaged. The exploration of Raz’s character is another driving force, and his infectious charisma kept me wanting to play late into the evenings.

Psychonauts 2 is structured in a hub-like manner. Psychonauts HQ serves as a base of operation with a couple of other hub areas to transition between. These areas contain characters to interact with and collectibles a plenty to find. While it’s possible to mainline the story quests, there are also plenty of distractions to be had here. Pursuing them will help you achieve the more powerful upgrades for your Psi Powers.

With a clean and minimal UI, there’s no quest log or 3D markers to point you in the right direction. Objectives are delivered diegetically, which encourages the player to pay attention. I appreciated this, as it truly instilled a sense of player agency in the narrative. Written objectives and directional hints are a few clicks away in Raz’s journal. It also serves as a way to keep track of collectible and side quest progress.

While there is a fast travel system, I ended up ignoring it entirely. That’s mostly down to the excellent movement system that’s been refined since the days of 2005. Raz no longer feels arthritic in his jumps and can be controlled with precision, making the 3D platforming much more of a joy than a frustration. The Levitation power returns and lets Raz roll around environments at fast speeds. Objectives are never usually more than a minute or so away from each other, so this quickly became my transport method of choice.

Not all sunshine and rainbows

The rest of the powers in Raz’s arsenal provide variation to combat and puzzle solving. They’re awarded to Raz at regular intervals, maintaining a sense of progression. New enemy types are also thrown at you regularly, requiring the player to experiment with their different powers.

With each new mind to infiltrate comes a unique set of puzzles. Psychonauts 2 follows in its predecessors footsteps in that it regularly shows you a unique gameplay mechanic, has its fun with it, and then discards it for something else that’s brand new. This keeps the gameplay impressively fresh, showing the player something new and shiny before the old thing gets stale.

Combat is easily the weakest area of the new game, but that’s not to say that’s bad by any stretch. It just becomes a bit formulaic once you figure out each enemy’s weakness. Switching between powers on the fly adds variety to combat encounters, but they’re nowhere near as riveting as the platforming sections. I would have liked to see more experimentation in this area of gameplay.

The oozing style of Psychonauts 2 is easily its strongest point. From its jaunty jazz soundtrack to the turbulent art style, the game constantly keeps things fresh by throwing something new and striking at you. Much of the game takes on the same plasticine appearance as the original, serving as a neat callback to its original Xbox roots. Throughout, the game looks strikingly akin to a high-budget animated movie. I’ve a feeling that it will stand the test of time for a long while.

That’s supported by the blending of 2D elements into the world. These are mostly done via the ‘Figment of Imagination’ collectibles that are strewn generously across the levels, and also as anchor points for the Mental Connection ability. Each new mind you explore also offers up unique takes on the established visual identity. More than once have I entered an environment and audibly gasped at how striking it is.

Something else that’s striking is how polished the game appears to be. Even on a pre-release copy, I never encountered a single bug, overlapping line of dialogue, or missed a jump that I thought I should have made. It’s impossible to say whether the added support from Microsoft helped to get the game to the place where it is now, but the certified quality is clear to see. It resembles something that I’d expect to see in a Nintendo or Sony first party game. Seeing the same achieved in a Microsoft first party title is fantastic to see.

Double Fine made headlines a few months ago when it doubled down on its stance with accessibility features. I’m happy to report that there are a decent set of features here that should help pretty much everyone experience what Psychonauts 2 has to offer.

These accessibility features are the first screen to appear when you launch the game, which is always a good start. From there are options to customize the subtitles and game fonts. Colourblind settings and a slider to change the camera shake intensity are also included. Going a step further, it’s possible to completely disable fall damage, toggle invincibility, and enable an easier form of combat. None of these options affect the players ability to unlock achievements or trophies, which is an excellent touch.

There’s room for improvement. With the crazy colour palette of Psychonauts 2, I would have liked to have seen a high contrast mode to make collectible finding more accessible. A text-to-speech reader for menus is also missing, and there are a few toggle control options out of place.

There’s a useful ‘Previously On’ video that recaps the story of the original game. It’s great for those who haven’t played the original for a while, but it also does a good enough job to catch someone with no Psychonauts experience up to speed.

Finally, a detailed mental health content warning does an accurate job of describing the difficult content that Psychonauts 2 can sometimes deal with. The game points players in the direction of useful mental health resources, which is great to see.

We’ll have a more detailed outline of the Psychonauts 2 accessibility features going up on GameByte later in the week.

Is Psychonauts 2 worth your time?

Playing Psychonauts 2 is like taking a step back in time in the best way possible. The fact that the game’s core concept still holds up 16 years later is a testament to how far ahead of its time the first game was. Psychonauts 2 feels like it’s the game Double Fine always wanted to make. It incites a childlike, playful nature that I’ve not experienced in games for ages. At the same time, it deals with some heavy subject topics in ways that feel nuanced. Even if you haven’t touched the original, Psychonauts 2 is absolutely worth playing through.

Game reviewed on PC. A copy of Psychonauts 2 was provided by PR for review purposes.