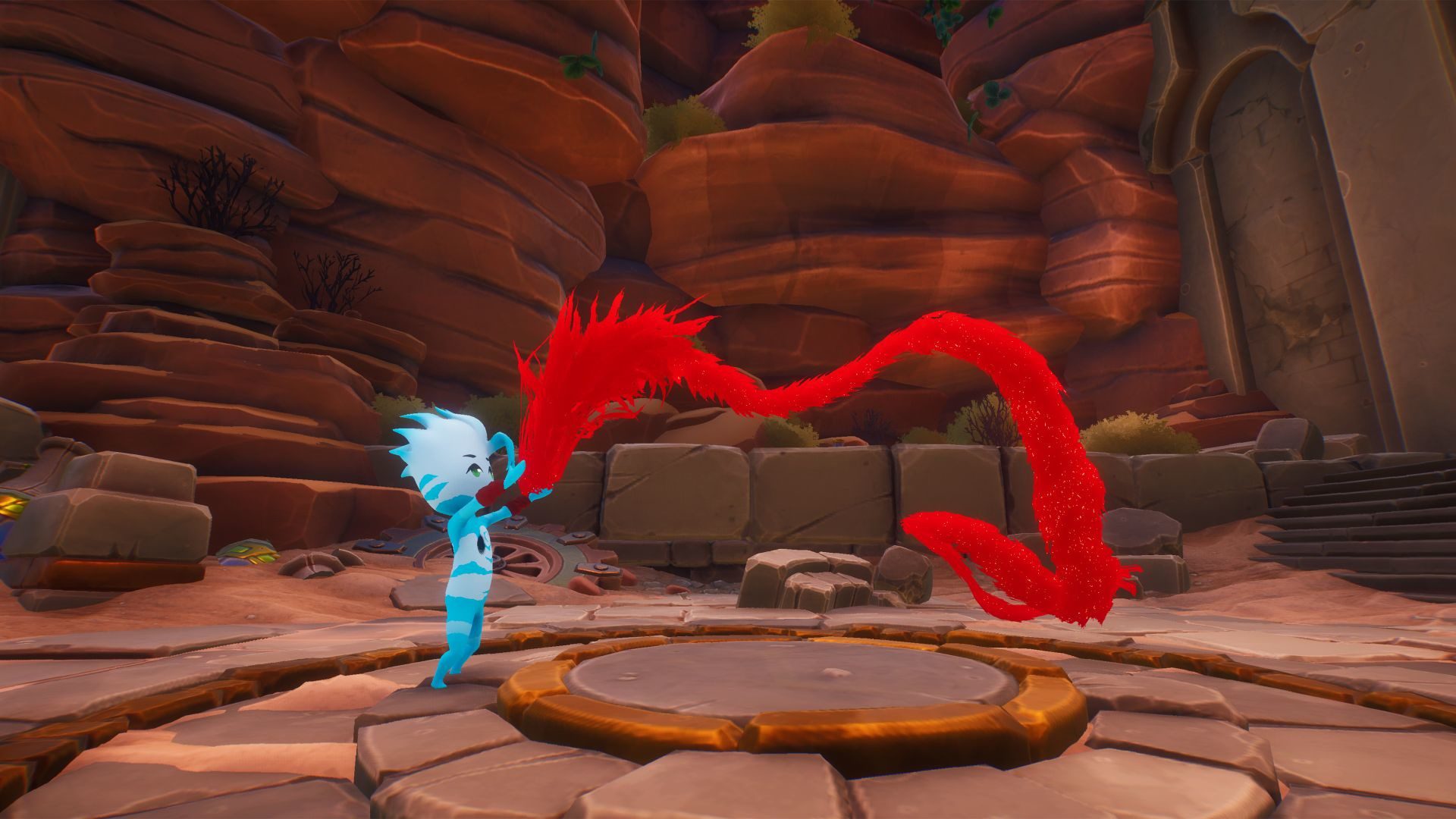 It turns out we’re still not done with game releases in this latter half of the year. While AAA season may be over with the launch of Halo Infinite’s campaign, there are still a couple of indie games leftover to see us through to 2022. Scarf is one such example of these.

Scarf is a 3D platformer in which you play as a hero whose journey becomes intertwined with that of a dragon-like scarf. The two go on adventures together through various beautiful landscapes as they seek to bring peace to the world once again.

me and my scarf

There are three worlds in Scarf, with each one taking about 60 – 90 minutes to beat. Each one presents its own form of platforming challenges, puzzles and story segments. As you play, the scarf gains new abilities such as being able to transform into a glider, or swing across gaps like a rope.

The worlds are also incredibly beautiful, utilising a cartoon-esque style that makes each level a joy to explore. They’re filled with vibrant edges, striking colour palettes and diverse biomes that easily allows each area to pop out extravagantly. Scarf seems like it was designed by a team that knows how to blend colours well, and how to evoke certain emotions through this arresting visual design.

The bond between your own character and the scarf is also at the forefront of the game’s narrative. With each new ability gained, you feel much closer to your cosy companion. As this bond is built, its absence is also felt during any segments in which you’re separated from the scarf. The result is a relationship of co-dependence, where only through this bond can you fully feel capable of beating each world.

The story in Scarf is pretty minimal, with a large majority of the facts being pieced together by you as you discover different collectibles that build upon the mythology of the world. You’re encouraged to search beneath every rock, behind every bush and inside every structure for clues that will help you piece this story into one.

On the other hand, this does lead to you missing clues if you miss a certain pickup. It’s a big shortcoming of the game to not have a story that is quite as solid as this. On the other hand, the overarching plot isn’t actually as crucial to the game’s experience as much as the relationship explored between the hero and the scarf.

There are also multiple endings to the game, with a better ending being rewarded for those who can find enough collectibles. This encourages you to take your time with the game and seek out these special finds. You’ll ultimately end up spending more time in each world as you search for these pickups, not only directly influencing the narrative but also allowing you to enjoy more of those gorgeous visuals.

Scarf is also, unfortunately, a little buggy. There are a few puzzles that I managed to solve simply by glitching my way through the level geometry. There was also a moment where I was stuck in mid-air while gliding, unable to break free of an unintentional paralysis. It forced me to close the game and lose a bit of progress. Otherwise though, Scarf runs well on PC and is certainly one of the better looking platformers of the season.

Unfortunately, Scarf’s accessibility also suffers. For starters, the game advertises itself as an “immersive narrative through a story without text”, but this isn’t true. There is some spoken narration during cutscenes, with no options to tweak the size or appearance of subtitles. There is also no process for changing controls. A colour blind setting does exist, but it’s a simple “yes” and “no” that doesn’t take into account the varying types of colour blindness, nor does it explain what aspects of gameplay it’s actually tweaking.

Is Scarf a good game then? It’s certainly not terrible. I’d suggest it might even get lost in the shuffle that is the end-of-year period, which it doesn’t deserve. The game has a great foundation for puzzle design blended with platforming and exploration. Otherwise, the shortcomings with the game’s story aren’t intrusive enough for it to be a massive problem. It’s a solid little thing to spend a couple of evenings with.

Code was sent to GameByte by Dead Good Media PR for review purposes.