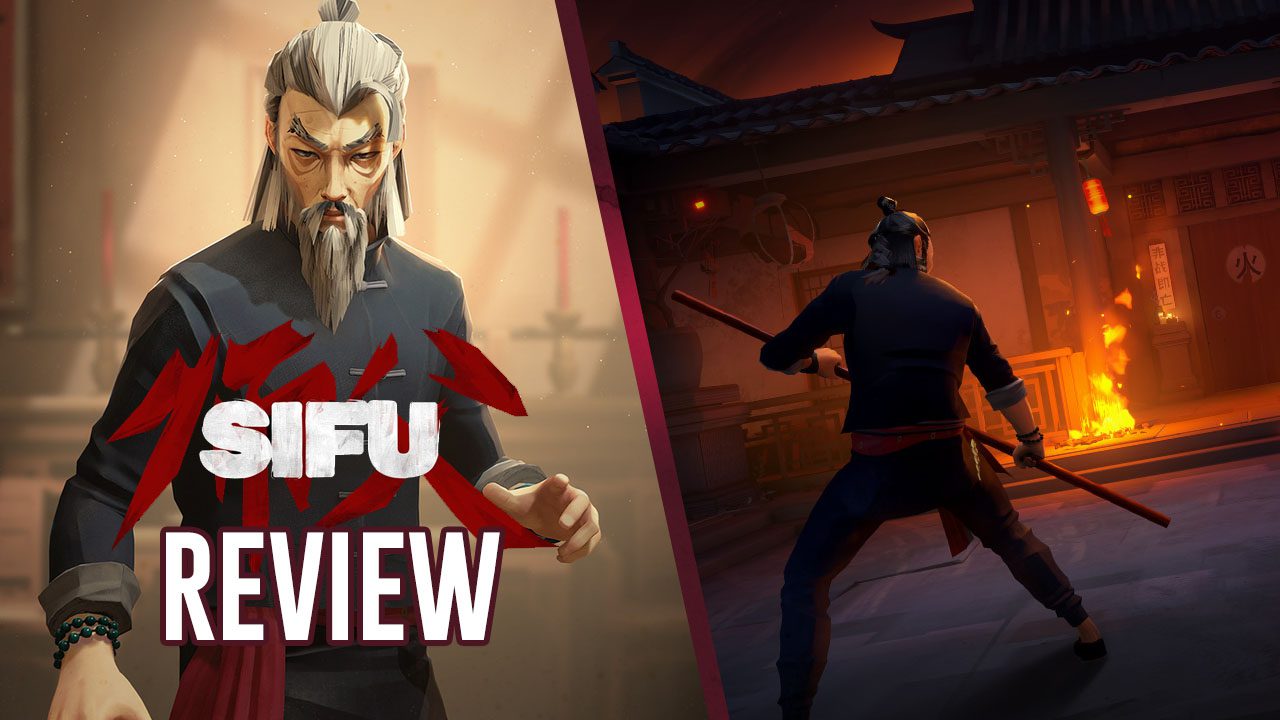 If I had to describe Sifu in one sentence, it’s “martial arts Sekiro meets Hades”. The brilliant “parry-and-posture” combat system of the former combined with the stage-based roguelite aspects of the latter makes for an awesome pairing. In theory.

Let’s start with the premise: Sifu kicks off with your mentor being murdered at the hands of a gang of thugs. Your character spends years training in kung fu, and eventually reaches a point where they’re ready to head out and take on the five gang members for revenge.

There’s a lot to enjoy about Sifu’s combat. The ‘structure’ system borrows from Sekiro’s posture-based combat, where you attack enemies to break their structure that allows you to defeat them in a final finishing move. As well as that you need to keep an eye on your own structure, so you won’t be temporarily stunned if you fail to deflect enough enemy attacks.

Just like how Sekiro adapted the “clash of swords” feel of samurai movies, Sifu acts as a homage to martial arts films of China’s action cinema (think Bruce Lee, Jackie Chan etc.) that feature long, drawn-out fight scenes in tight spaces. But it’s important to remember that martial arts, more specifically kung-fu, has a rich history that goes way beyond cinema. It’s played a role in Chinese culture stretching back thousands of years. You can find references to it in ancient Chinese texts, historical sources and more modern non-fiction mediums.

Strictly speaking, the game’s treatment of Chinese culture seems to pull mostly from more modern Asian action cinema and misses the broader context of it. Sifu’s obsession with China “as an aesthetic” highlights some of the problems with modern game development. It might have been better had Sloclap included educational resources that seek to teach players about the history of martial arts, or maybe hired more developers who were Chinese.

And this is an important bit of context – I am white. I do not claim to be an expert on this aspect of the game, nor am I going to say you should take my word for it. Please read criticism on this game from Asian writers who are better qualified to discuss these topics, such as this piece from TheGamer’s Khee Hoon Chan on Sifu’s appropriation and palette-swap style of Chinese culture.

Sifu uses lots of context-heavy attack animations, so your proximity to other props and locations in the world determines the kind of combat move you make. Whether you’re next to a bar, against a wall, on a flight of stairs, holding a staff or brandishing a knife, each attack is completely unique to your position with the world. This attention to detail keeps the game fresh as you’re not constantly seeing the same finishing move each time you play. It stops it from feeling repetitive.

You make your way through five stages of increasing difficulty, beating up plenty of bad guys along the way. At the end of each zone, there’s a boss you need to kill. Meanwhile, any time you’re knocked out you get a bit older, starting from age 20 and slowly dying your way into your seventies.

This all sounds great on paper, and the opening hours of the game are genuinely great for this reason. My biggest problem with Sifu is the mechanics feel way too complicated than they need to be, and these problems are made clear once you get 3-4 zones deep into the story.

By the very nature of the game’s death mechanic, your perseverance is rewarded in several ways. The more you die, the stronger you get as you deal more damage. On the other hand, your health also declines. So it’s about finding the right balance between being strong enough to defeat enemies while ensuring you’re not too weak that one attack kills you.

A fantastic idea in theory, but the game falls apart when you realise just how punishing the death mechanic is. The more deaths you experience, the more rapid your aging becomes. In your twenties, you’re only aging up 1-3 years. By your forties, it’s going up by 5 or 6 years each time. You can reduce the rate at which this happens by defeating minibosses, but these enemies are tough enough that you may waste a couple of years on them to begin with.

there are some caveats

Sifu’s main problem is persistence in fighting through the immense difficulty doesn’t feel very rewarding when you hit the next stage. You begin a level at age 25 and finish at age 50, which just means you have fewer lives for the next zone. When you realise you need to do this over five large areas filled with tough enemies and bosses, the game becomes frustrating.

This also extends to the game not explaining its own mechanics very well. You’re encouraged to replay levels to try and beat them at a younger age, which leaves you better off for the next stage. But one caveat is you’re meant to lose all your skills and upgrades. Except when replaying a level, I found that all my unlocks from before stayed intact and I could keep them no matter what.

“But Olly, you’re supposed to replay older levels and get better at it. You can actually beat the game without dying at all!” – to which I say, okay, so why even include this mechanic at all? If the goal is to repeat levels and gradually get better at it, what function does the forced aging serve? If you want to have a system that allows you to min-max your damage versus your health, there are so many less-punishing ways to do it. In the end, Sifu will be fun for players with enough time to master the game but will become a frustration-fest for anyone looking for a shorter experience.

‘falls short of its premise’

Sifu could do with an option to tweak difficulty, because there is definitely a good game underneath all this. The combat is really enjoyable when you’re not getting your butt handed to you, and the world design is fun to explore by unlocking new shortcuts and finding hidden clues that add greater context to the story. An option to make death less punishing or to make combat cues more forgiving could do wonders for accessibility.

Despite an excellent combat system and intriguing world design, Sifu falls too short of its premise. Regardless of whether you’re playing it casually or going harder, the death mechanic is simply too punishing to be enjoyable. Perhaps with a fairer system, this would make for a better game.

A copy of Sifu on PS5 was provided by Tinsley PR for review purposes.