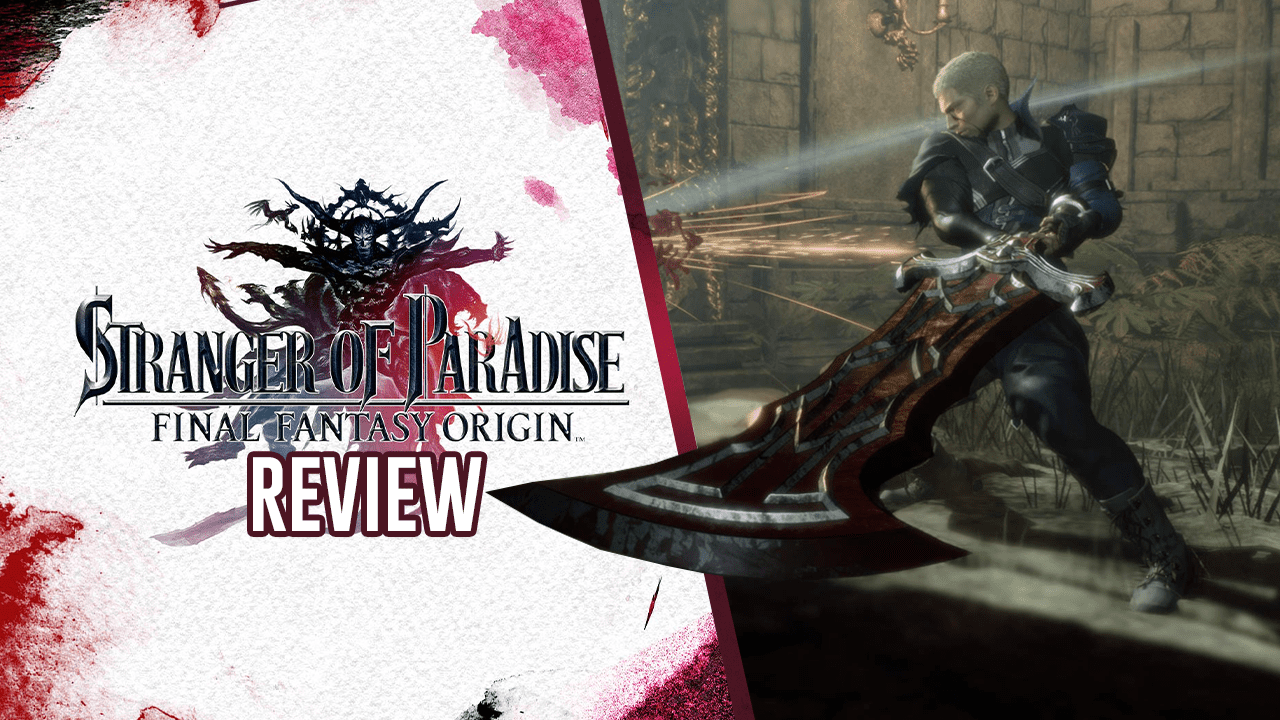 In a June 2021 interview with Famitsu magazine, longtime Square Enix artist and Stranger of Paradise: Final Fantasy Origin co-producer, Tetsuya Nomura, made an interesting comment. Originally thought to be its own IP, it was “further refining” by co-producer, Jin Fujiwara, and co-director, Daisuke Inoue, that resulted in the new game’s inclusion to the Final Fantasy franchise.

Almost instantly, that confusion is made clear. Promised as a more brutal and darker reinterpretation of 1987 original Final Fantasy game, Stranger of Paradise is a mess – laden with elements that scream the word “unfinished“. However, when combined with the hardcore action RPG’s original concepts – harder-hitting combat and the systems which fuel it – there is a truly enjoyable experience to be had. It’s just not anything near what the game’s creators intended.

This Stranger of Paradise: Final Fantasy Origin review is spoiler-free.

In Stranger of Paradise: Final Fantasy Origin, you play as Jack – a man who’ll stop at nothing to kill the evil knight, Chaos, because reasons. In the kingdom of Cornelia, Jack and his collection of 90’s rock band-looking friends are supposedly the Warriors of Light, set to defeat Chaos and bring peace to the land. As you’ll meet these heroes suffering from amnesia, you’ll too feel like you’ve misplaced a good memory chunk of the prologue.

Not helped by what seems like some of the most out-of-touch, cringey dialogue in recent memory, an array of overly complicated cutscenes are made more so by haphazard pacing. Making you wonder whether you missed a few spoken details, or a large parts of the game were cut entirely. Although the pieces gradually come slightly more together as your playthrough goes on, so many of the dots still fail to connect.

Even outside of the context of the situation they’re in, our protagonist and his 4 companions are among the most one-dimensional seen in a Final Fantasy game in a while. For example, Ash is the beefy and tough yet friendly one. Jed is the skinny but slightly cheeky K-pop band member lookalike. And Jack of course, is the stoic angry one whose vocabulary is 80%+ varied ways of saying he needs to find and kill Chaos.

In spite of that sounding like a joke attempt, Final Fantasy Origin will offer you little-to-no extra layers or development to these characters after you meet them. Even when the game tries too, the anarchic telling of the narrative hinders any attempt to make it organic. While the voice actors were clearly giving it their all where possible to provide their roles some substance, those efforts were relative to a master swordsmen trying to do battle with a wet stick they found in a park.

To that effect though, Stranger of Paradise’s handling of its characters and story is so baffling, so confusingly bad, you can’t help but get excited with each cutscene. Not to see what profound and edge-of-your-seat element in the story unfolds. But to see whether Jack ends another conversation by walking away blasting metal music in his wireless earbuds, or what power of friendship one-liners his friends will throw your way next. .

The Gameplay & Combat – I’ve got Soul(Shield)

The more time you sink in to trying to comprehend what’s going on with the plot, the more you’ll mentally retreat to just focusing on the dungeon exploration and combat, because that’s what Stranger of Paradise: Final Fantasy Origin does best.

Via a World Map, the story is segmented into missions that will take you through a variety of locales including castles, lush forests, pirate caves, and haunted mansions. Augmenting your party with weapons and equipment many (many, many) times throughout each level , you set out from Point A to Point B, brawling with many Final Fantasy monsters and obtaining equippable loot on the way – usually encountering an initially frustrating, but eventually enjoyable, boss fight at the end.

While that premise may sound tedious, there’s a succinct charm drawing you back in every time. Despite burdened with some clunky camera issues if you’re brawling in a closed environment, what’s unique about Stranger of Paradise’s combat mechanics truly stand out with the variety of ways you can play and the layers they add to make you think about each fight.

For example, yourself and each enemy come with a Break Gauge. Deplete theirs, and you can brutally kill them with a finishing move which crystalises in a blood red hue. If they deplete yours, you’ll become staggered: unable to move momentarily and open to attack. This goes hand in hand with Soul Shield – a superior version of the standard guard which better blocks attacks, restores MP, staggers that enemy, but consumers your own break gauge as a cost. If you happen to use your Soul Shield whilst your enemy uses certain attacks, you gain those for yourself to use temporarily an as Instant Ability.

There can be a lot going on in each encounter, especially with more enemies, making it very easy to become overwhelmed when starting out above the Casual (Story Mode) difficulty. Nevertheless, like many combat-heavy titles, your familiarity with the controls will grow overtime, and tearing through enemies with barely any damage can feel like a blast. So many other games attempt to push your wits and reaction times to the limit. While Stranger of Paradise’s ground-level mechanics don’t exactly break the mould – that fact doesn’t lessen the satisfaction of when you pull it all off.

Stranger of Paradise: Final Fantasy Origin has a job for you

The most intricate amongst all of these gameplay layers, and what really makes Strangers of Paradise: Final Fantasy Origin actually fun to play, tying all of those aforementioned positive aspects together, is its Job system. These varying classes (27 in total) offer their own unique abilities and skills to unlock through Jobs Tree available at save points and the world map.

Not only can your affinity with your selected class be boosted by the attributes of your gear, but you can strategise in your Job Tree progression to unlock higher Advanced and then Expert jobs. Furthermore, you’re allowed to save two Job presets to switch to and from at a time. Do you want to start a fight as a Knight and switch to a White Mage for support? Sure. Or switch between Beserker for close combat and Lancer for a bit of range? Go ahead.

Stranger of Paradise may be over-saddled with a far too cluttered inventory equipment and weapons management system. Adding to that, its quickly growing assortment of Jobs to choose from may become daunting to start. But, despite ALL of that. The experimentation and sense of wonder that comes from it – feels worth it. All paying off in a heated boss battle, or at last finding a formula to make ease of common enemies on the hardest difficulty – is a satisfying feeling worth playing the game itself. Paired with a much more sensical story, and it would have been a match made in heaven.

Stranger of Paradise: Final Fantasy Origin Review – Is the Game Worth your time?

There are many things against Stranger of Paradise: Final Fantasy Origin – some we’ve still yet to touch on. The story: incoherent. The characters: instantly forgettable, even with the Jack memes. The cutscenes: breath-taking in some, horrifyingly underdeveloped in others – that definitely could not be saved by the Resolution mode. Even the way you’re made to optionally interact with the NPCs to get a sense of the wider world, is weirdly segmented into a drop down world map menu, into a string of creepy 10-second sound bites from PS2-era looking mannequins.

Be that as it may, there’s a joy of a game in here – buried in all of the nonsense. The Job system is absolutely phenomenal, with its vast depth of possibilities breathing life into even the monotony of dungeon crawler missions. The already fun multi-layered combat excels further in hard difficulty – making you think more about the different ways to personalise and hone your playstyle. Like a Soulsbourne game in disguise. Whenever one gets bored with gameplay, the chance to switch and develop and entirely new way to play is a perfect fix. And one as detailed as Stranger of Paradise is a fine example of how to reinvigorate that aspect of gameplay.

When paired with the “so bad, it’s good” story and dialogue, Stranger of Paradise: Final Fantasy Origin is a good time for the partly the wrong reasons. Critically, it’s not great. You’ve still got a car crash of a game on your hands. But, it’s a car crash you can’t look away from. In the meantime, the combat and job system is a rollercoaster ride which takes you right past it, being a wild ride in its own right.

For our Stranger of Paradise: Final Fantasy Origin review, a digital PS5 copy was provided by Square Enix.

Do you agree with our Stranger of Paradise: Final Fantasy Origin review? Let us know across our socials, like our Twitter or our Discord. Or check out our other latest reviews, like for Elden Ring or Gran Turismo 7.