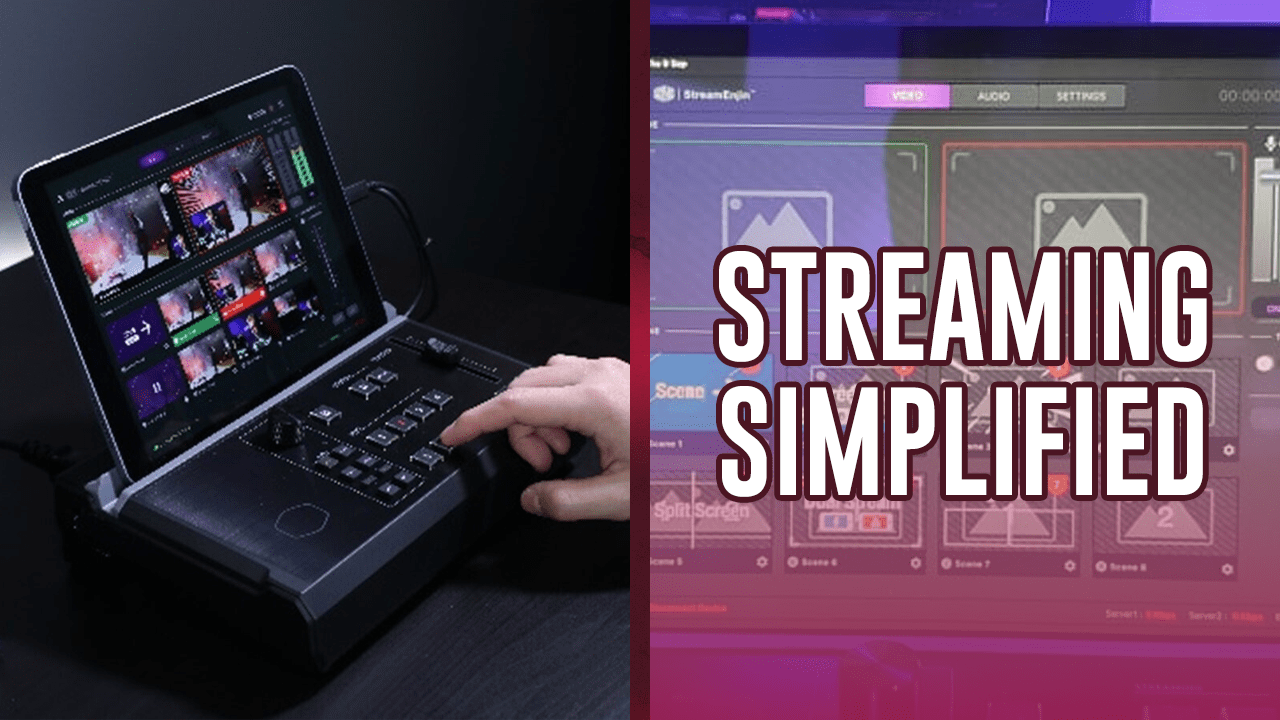 This is the tagline for the StreamEnjin – an incredibly impressive new piece of kit from Cooler Master. It’s an all-in-one livestream mixer that allows you to edit and switch your inputs for seamless broadcasting of your content. With its portable form factor and multi-cam inputs, the StreamEnjin could be just the thing you need to take your streaming game to the next level.

I was lucky enough to get my hands on the StreamEnjin ahead of its release. I mocked together some test VTs, booted up the iPad app, loaded everything in and got to work putting it through its paces.

What Exactly IS the StreamEnjin?

The StreamEnjin is essentially a vision mixer, allowing you to swap between up to eight custom scenes on your stream with ease. It currently comes with an iPad app, so you can edit overlays to your liking. With its simple controls and portability, the potential it has for accessible streaming is an incredibly exciting prospect.

One thing I particularly enjoyed about the StreamEnjin was the fact that it streams straight from the device. This is, in theory, great news for gamers who want to get into the streaming scene, but can’t afford a top-end streaming PC. In theory. More on that later.

What Would I Know About Broadcast Kit?

As someone with a background in TV and studio production, this was the closest I’ve felt at home to standing in my old TV gallery. The StreamEnjin wouldn’t look out of place as a studio-standard vision mixer – it’s sleek, professional and stylish. For streamers who want an all-in-one integration of live streaming, content mixing, stream capturing, and editing, the StreamEnjin is perfect.

The console has audio controls, which allow you to manually adjust the volume of individual scenes with ease. I particularly enjoyed the transition slider, which allows you to queue a VT in the preview window, then transition at your own pace.

When working with multiple scenes, the buttons would light up according to what was loaded into the preview window, and what scenes were currently broadcasting. This is an incredibly helpful feature that I wish more vision mixers had. However, the tactile feedback on the scene buttons felt slightly cheap, with little grip on their surface. I found myself having to really press the buttons down to register an input, which may pose a problem when mixing between multiple VTs in a broadcast.

The Reality of Classism in Production

Can I say, confidently, the StreamEnjin is one of the best pieces of streaming kit I’ve got my hands on? Well, it’s certainly up there.

However, with its steep price point, it’s hard to recommend to 99% of streamers. When testing out its features, I found myself wondering about the target audience this piece of kit was appealing to. Production houses will often purchase from larger brands, such as BlackMagic for integrated live TV studio work. Streamers can buy the StreamDeck, which may not have physical audio controls, but works seamlessly with OBS and StreamLabs for any alterations.

The StreamEnjin retails at £899.99. This is extortionate, considering potential buyers will need to factor in the fact they need an iPad to operate, which can almost double the cost. Of course, Cooler Master has plans for an Android version of its app, but that can still add on an extra £200-£300 to your production set-up. For that price, it’s hard to justify this equipment over a copy of OBS and a dedicated streaming/gaming PC.

I compared it against my old BlackMagic ATEM Mini and the more affordable and accessible Stream Deck from Elgato. I’ve used both of these products extensively in my career. I actually found the traction on both consoles to be more tactile and satisfying, even if they look less sleek.

From an accessibility standpoint, it’s just a shame to see streaming obscured to less-affluent, but just as talented, content creators.

So, is the StreamEnjin Worth Your Time?

Are you looking to produce high quality multi-camera productions from the comfort of your bedroom? For you, there isn’t a better option on the market than the StreamEnjin. I loved how intuitive the app was, the sleek style of the vision mixer and the options it gave me for advanced stream controls. However, with cheaper alternatives on the market, it’s hard to say whether the StreamEnjin deserves a place in your setup.