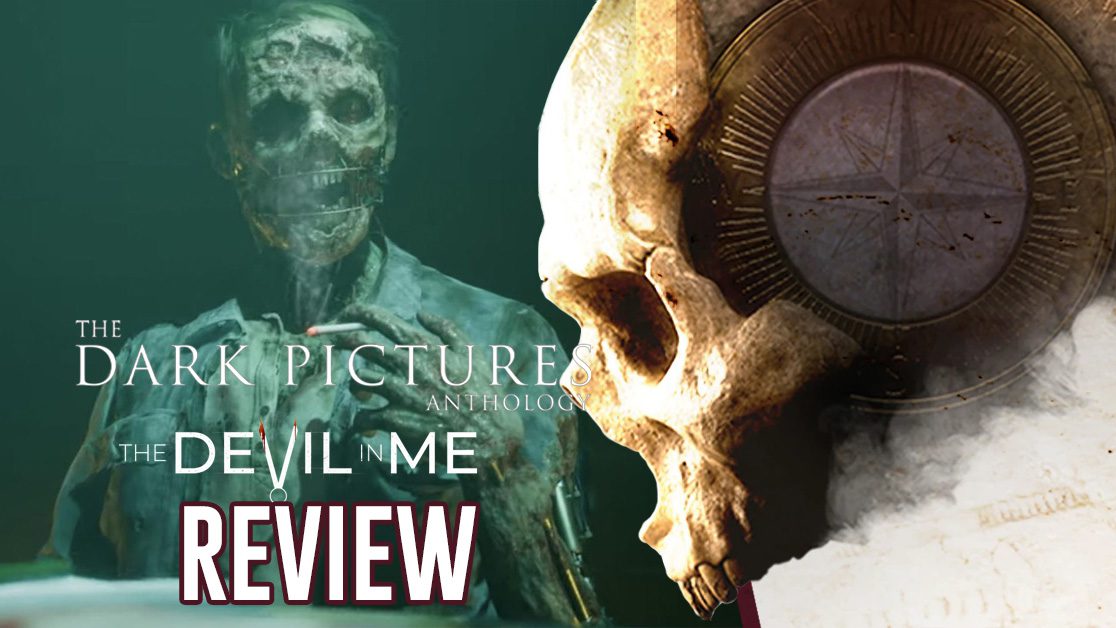 From the creators of Until Dawn comes ‘The Devil in Me’; the fourth and final instalment of The Dark Pictures Anthology Season One. It’s a tense, twisted tale that left my heart in my throat at every turn.

I’m leafing through the thesaurus on my desk to find words to use other than “tense”. Stressful? Unnerving? Nerve-racking? Whatever the word you choose, The Devil in Me is certainly a masterclass in suspense.

The story is based on the real-life crimes of H. H. Holmes, America’s first serial killer. A documentary film crew receive a mysterious invite to film at a replica of H. H. Holmes ‘Murder Castle’, recreated by the mysterious Granthem Du’Met. Shocking, this totally-normal-and-not-at-all-creepy turn of events turns out to have catastrophic consequences for the crew.

Its twisting narrative oozes mystery out of every pore. You’ll come to learn more about each of these playable characters as you switch between their perspectives. My first playthrough took me about 7 hours to complete. That’s right, I said ‘first’ playthrough. The Devil in Me has a branching storyline, meaning the plot changes based on the decisions you make. And yes, every single one of these characters can die in your version of the story. Permanently.

If you want to see every outcome and ending for each character, you’ll have to replay the game and pick different paths and scenarios. Even better, there’s an auto-save system that stops you from going back and reloading a different save file to change your decision. Every choice feels final and conclusive, I found myself genuinely regretting the early decisions I made.

The Devil in Me has brand-new mechanics that haven’t appeared in the anthology before. These range from quality-of-life improvements, to new traversal elements.

The narrative is based on a morality system in dialogue options and actions. Every unassuming action can have potentially devastating consequences, ranging from ‘who to kill’ to ‘do I give this person my tool’. The panic sets in when you have 5 – 10 seconds to make your choice which could affect the ending you get.

As with other Dark Pictures entries, there are collectables and (often brutal) flashbacks that help to aid your decisions. This helps to fill out the gaps in the story surrounding the mysterious Du’Met and the castle’s backstory.

Long-term fans of the series will be glad to know there’s an inventory system which helps you keep track of what you pick up along the way. Each character also has their own tool which can solve puzzles. Some of these are a bit weird. Director and businessman Charlie has a magic business card that’s strong enough to pick locks, whilst cameraman Mark has a tripod to knock things off high ledges. That would never pass a production health and safety assessment. Who’s their production manager?

It’s not all bad though. The stand out of the show is Erin, the sound engineer. Her directional mic has such powerful audio capturing she can hear crying in the walls. Spooky. The sound design in sections where you navigate the darkened hotel as Erin is fantastic. Her noise-cancelling headphones are a dream come true for those who deal with sensory overstimulation. They muffle all unnecessary sounds, leaving you with a highly intense experience as the wailing gets louder and louder.

What Else Do You Need To Know?

Characters can now interact more with the environment around them. Running, climbing, hiding, vaulting, jumping and crawling are all on the menu. This should have, in theory, helped the game feel more engaging. You’re completely in control. Unfortunately, my main gripe with this game is the gameplay, much like its predecessors, is… Lacking. The game ends up feeling very repetitive, despite its branching narrative. I felt no desire to go back and complete the very basic puzzles once I finished the game. Often, I found myself zoning out as I walked from place to place, pressing a single button, and then watching a minutes-long cutscene.

Games can sometimes get away with cinematics if the cutscenes are well-designed. However, The Devil in Me’s frequent cutscenes often felt like watching a low-budget horror movie, rather than playing a video game. Now, before you come for me – I understand and often appreciate the ropey graphics of horror games. If done correctly, it can elevate a horror game into a hair-raising classic. But it has to be done right and, unfortunately, The Devil in Me just felt undercooked.

The puzzle aspects between the cutscenes also felt pretty uninspired. For a game about solving a mystery, I would’ve liked the puzzle elements to require a bit of brain power. Much like the gameplay, it was often reduced to ‘press a button’ and walking straight on to the next.

So, Is The Devil in Me Worth Your Time?

Horror games, at their very core, are all about the fear factor. Developer Supermassive Games did a fantastic job of sustaining the unpleasantness in certain sequences, but couldn’t maintain it for the entire length of the game. I come away from The Devil in Me with a new-found fear of seeing button prompts pop up at every available opportunity.

That being said, there’s still a lot to like about this game, particularly if you’re a fan of the previous instalments. I particularly enjoyed the different modes available. There’s a single-player mode which offers different perspectives, as well as a multiplayer mode if you’re not feeling particularly brave that day.

A PS5 code was provided by Bandai Namco for the purposes of this review.

Do you agree with our review? Let us know across our socials, like our Twitter or our Discord. Or check out our other latest reviews, like Call of Duty Modern Warfare 2 or God of War Ragnarok.