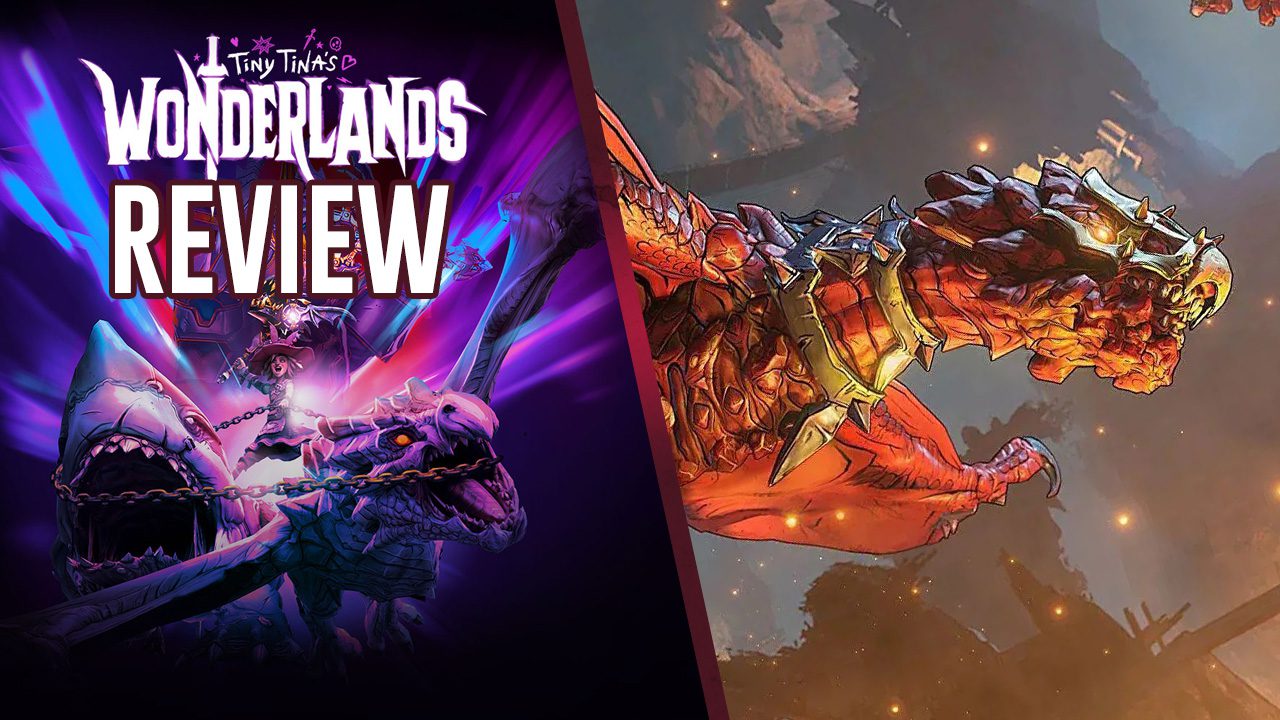 I should preface by saying I’m not a massive Borderlands fan. I enjoyed the original game, but due to the amount of required looting and item management I quickly fell off the sequels. It was simply too chaotic for me. Borderlands 3 took this further, bungling up the item rarities, forgettable boss fights, and juvenile humour.

When Tiny Tina’s Wonderlands was announced last year, there was the hope that Borderlands could sheathe some of its past bad habits. Perhaps this was the chance the series had to amend some of its biggest criticisms while also using the new thematic direction to bring it an identity of its own.

After playing through Tiny Tina’s Wonderlands for the past few days, there’s certainly a lot it does to qualm those initial concerns, but I’m also still a skeptic.

Tiny Tina’s Wonderlands is a follow-up to the Borderlands 2 DLC ‘Tiny Tina’s Assault On Dragon Keep’ – it’s framed as a D&D-style tabletop RPG called Bunkers & Badasses, where the main characters play roles in this ‘game-within-a-game’.

One of the biggest changes Tiny Tina’s Wonderlands brings is the ability to create your own character from scratch. In Borderlands, you’d select from a pre-determined list of Vault Hunters who had their own set of weapons, abilities and appearances.

Here, you can make your player from scratch. Choose everything from their appearance, voice and armour – and then select from different classes that determine your playstyle. This change makes the most sense when you consider the D&D inspiration. In a game where you can be anybody, why be limited to a handful of characters already designed by the development team. Sure, we all miss Lilith or Zer0, but it certainly works in the game’s favour to hand you full control over your character’s design.

With six different character classes and multiple playstyles, the game satisfies that role-playing feeling that previous Borderlands games also had. When playing as part of a team, the game certainly makes a great effort to diversify how you want to play. You can go for a ‘Stabbomancer’ who emphasises critical hits and status effects, dealing out the most amount of damage in the shortest amount of time. Or you can utilise ranged weapons with The Spore Warden class. Each role feels wholly unique to the playstyle you want, where most of the fun is combining this with the rest of your team.

Unfortunately, while the game is definitely made to be played with friends – some of Borderlands’ most infamous issues come to light here too. The more players you have on a team, the higher enemy health scales. It means that in a full team you end up with lots of bullet sponge enemies who take forever to beat.

There are plenty of ways to allow a co-operative game’s difficulty to scale with more players. For example, you can increase the number of enemies you face in any given encounter, or allow them to dole out more damage without giving them more health. You could also do it organically, by presenting players with more objectives and trickier checkpoints without affecting the gameplay loop too dramatically. But giving even the most common enemies unrealistically high pools of health just makes the experience more annoying than anything.

Obviously, the game is still better with friends. You can certainly enjoy it as a solo experience, where the health scaling issue is actually a lot better. But you’re missing out on those classic moments of taking on a big boss as a team geared to the max. Even during those quieter moments, messing about in the game’s main hub area or overworld, it feels like an experience angled towards the people who play with friends or matchmaking with randoms.

The game’s looting system hasn’t received much of an improvement. A staple of the Borderlands franchise, the system previously received criticism for being too convoluted and not rewarding enough. In Wonderlands, there’s still that issue of rare items not feeling rare enough, as within my first five hours of the game I was already fully kitted out with powerful weaponry with fancy colours and lots of different effects. But with the bullet sponge issue from before, it didn’t actually feel like these rare weapons were dealing any real damage.

This doesn’t mean the game is horrible though. In addition to the extra freedom I get in creating my character, I’ve also been enjoying the more direct D&D-inspired elements the game has. There’s a large overworld inspired by tabletop board games, with numerous landmarks represented by giant drinks cans or bottle caps. You use these to jump between different locations on the map to find your next quest.

The game’s main hub area, Brighthoof, also has a great sense of place where players can upgrade weapons, change their appearance and advance certain questlines. It reminds of the quieter, more enjoyable moments that come in a tabletop game where you can just kick back with your pals after a long day of adventuring.

This is part of the charm that keeps me from saying Wonderlands is “just another Borderlands” – because it feels like a lot of care has gone into at least setting its identity apart from the main series. Sure, the random encounters can get repetitive and there’s an overreliance on boss fights, but it has all the foundations of a co-op game that can remain enjoyable as long as you find things within it to enjoy.

I’m going to be honest here and say that Tiny Tina’s Wonderlands doesn’t make the best impression. Despite a fantasy-themed facelift and a bigger emphasis on character freedom, the issues that plagued previous entries in the series are still too numerous for it to feel like a substantial change. However, I’m still finding things to enjoy in it which, even as a Borderlands skeptic, at least makes it worth the price of admission for anyone playing this with friends.

For our Tiny Tina’s Wonderlands review, a digital PC copy was provided by 2K Games.

Do you agree with our review? Let us know across our socials, like our Twitter or our Discord. Or check out our other latest reviews, like for Elden Ring or Ghostwire Tokyo.