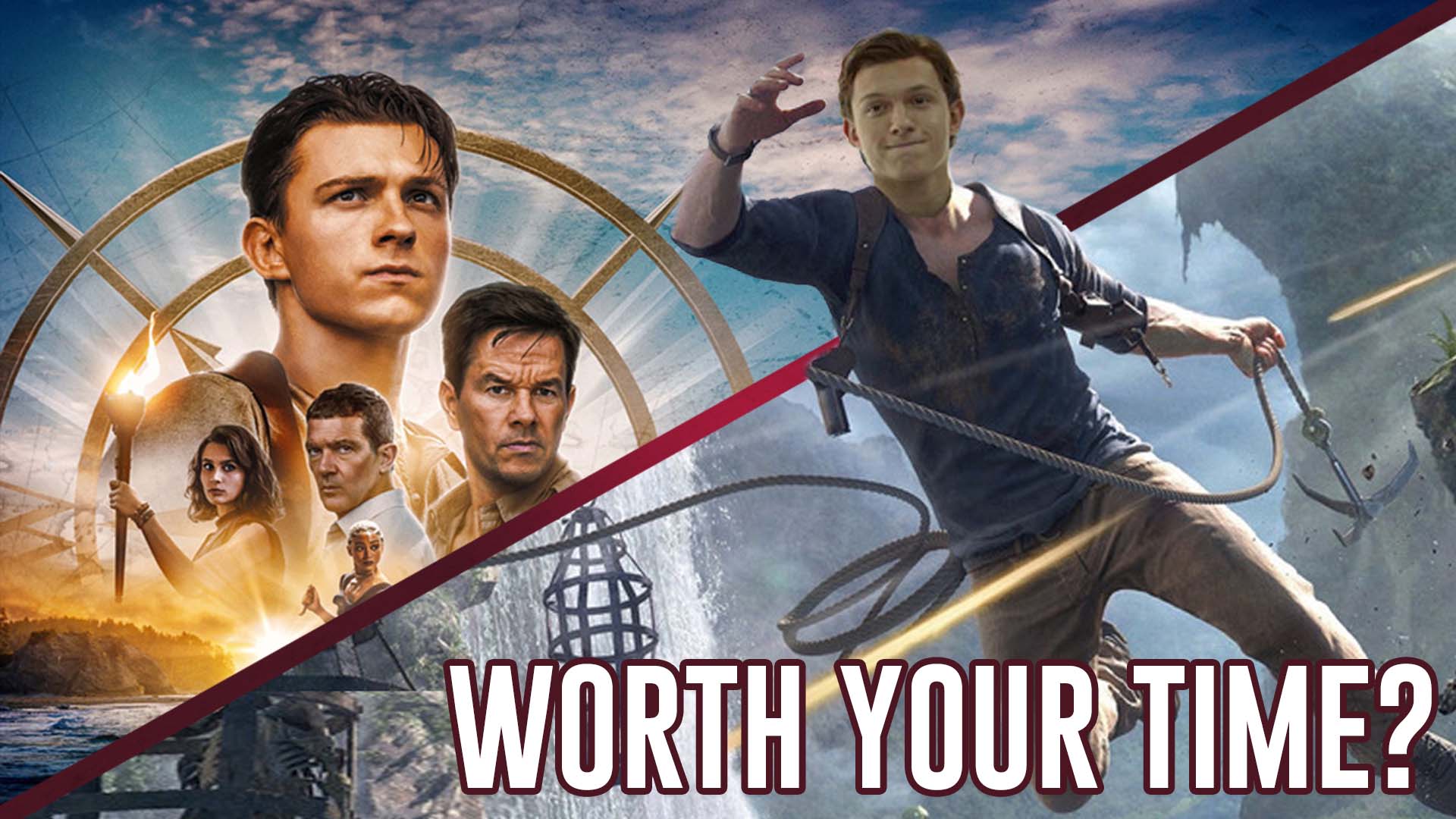 Video game movie adaptations have a long history of being, at best, fully mediocre. At their worst, they’re a soulless, shallow cash grab, playing upon the stories and characters fans have spent hundreds of hours with, reducing them to 2-dimensional caricatures that appeal to a mass market.

The Uncharted movie lies somewhere between the two. For every glowing praise, there’s a snag that ripped me out of this swashbuckling adventure.

What’s The Uncharted Movie Actually About?

The Uncharted movie is a prequel to, you guessed it, the beloved Uncharted franchise. It tells the story of how Sully and Drake met, and how an unlikely ‘friendship’ blossomed between the two. Directed by Ruben Fleischer, best known for cult classic Zombieland, the Uncharted movie is packed with all the visual gags, superimposed text and comedic timing you’d expect from someone with his experience.

If you’ve seen any ‘bloke goes treasure hunting’ movie in the past few decades, you’ll know what to expect from the Uncharted movie. I don’t think that’s necessarily a bad thing – it did the genre tropes well enough and sprinkled it with enough humour to appeal to a more modern audience. Many of the jokes are actually pointing at itself and laughing – Indiana Jones was mentioned at least once or twice in its 116-minute runtime.

The twists are wholly predictable, but that didn’t stop me from enjoying it, in parts. It’s very easy for a movie like this to fall into a caricature of itself and think it absolves its shortcomings through self-aware humour. But just as the Uncharted movie was toeing the line, it pulled itself back and moved the story on. Much like the games, each plot beat can be neatly organised into chapters, keeping the pace flighty and entertaining. As someone who is, quite frankly, shocking at geography, I particularly loved the Zombieland-esque establishing text that popped up on the screen to establish a new location. I could have done with more of that and less dodgy CGI planes tracking the flight path.

Let’s Talk About The Characters

When the trailers dropped, many, including myself, questioned the casting of Tom Holland as the wise-cracking Nathan Drake. Holland has made a successful career out of playing the sweet, adorkable teenage boy. Power to him, it worked out well for himl. But was it right for the street-smart, sexy Nathan Drake? I still don’t know. As my colleagues point out, Tom Holland is actually older than me. However, that didn’t stop me from feeling like a bit of a nonce with the number of gratuitous wet shirt scenes and shirtless workout routines. He brings a fun, flirtatious energy to the screen, but somewhat lacks the gravitas to pull off the film’s more serious moments.

The same can be said for Mark Wahlberg’s performance as Victor Sullivan. I felt it took him a while to embody the character we know. Despite this, the game’s comedic chemistry between the characters translates well to the big screen.

One thing I particularly enjoyed was how dynamic and flawed the female characters were. Sophia Ali as Chloe Frazer and Tati Gabrielle as Braddock were incredibly well-written; selfish, nasty and downright vicious at moments. It was refreshing to see smart, brutal women that weren’t celebrated as ‘girlboss’ by a media conglomerate.

Which is why I was so confused when Frazer, blinded by her greed, falls right into a trap set up by Drake. Yeah, I hear you. You might argue the fact she was ‘blinded by her greed’ is the whole point. However, throughout the movies, and indeed the games, Frazer continuously runs rings around Sully and Drake. It feels like a convenient set-up to move this powerful character out of the final act so she didn’t distract from the father-son, treasure-hunting escapade of the two male characters.

What About the Action?

Let’s face it – Uncharted is known for its rough and ready action sequences that are, above all, fun. I often find that video game movie adaptations get wrapped up in the gritty realism of Hollywood. It’s easy to forget a core truth of gaming – it’s meant to be fun. Believe me, I sat through the Assassin’s Creed movie with Michael Fassbender. Video game movies need to be fun.

I mean this with all the respect in the world – Uncharted is a dumb movie. It’s full of acrobatic action scenes that never take themselves too seriously. Holland puts his ballerina experience to good use – nimbly twirling and pivoting through waves of enemies. It’s perfect for Drake, who often relies on his wit, not strength, to get out of sticky situations. I particularly liked the sharp, quippy humour that went along with this outrageous style – it rarely felt forced.

However, some of the technical aspects of the movie were poor. With choppy continuity and dodgy editing, the dialogue and action sequences were stopped dead in their tracks as your brain tried to piece together exactly what happened. You might not care about that, but I did.

So, Is the Uncharted Movie worth your time?

The Uncharted movie, at its core, is a bland, B-tier Hollywood action adventure. But what more could you want from an Uncharted movie? If you’re a fan of the game franchise, you’ll get a kick out of the small nods to the source material. It’s a brand new story for Drake and Sully, and one I sincerely hope you enjoy.

If you’re not massively into the franchise, it’s messy, charted territory with a heart of gold. A fun way to spend a few hours. You’ll get a chuckle or two out of the jokes (although some, like the repeated jabs at a Scottish accent, fall flat). It’s not peak Kino, but hey, at least it’s not the Tomb Raider movie.

Early screening tickets for the Uncharted movie were sent to GameByte by Sony PR for review purposes.