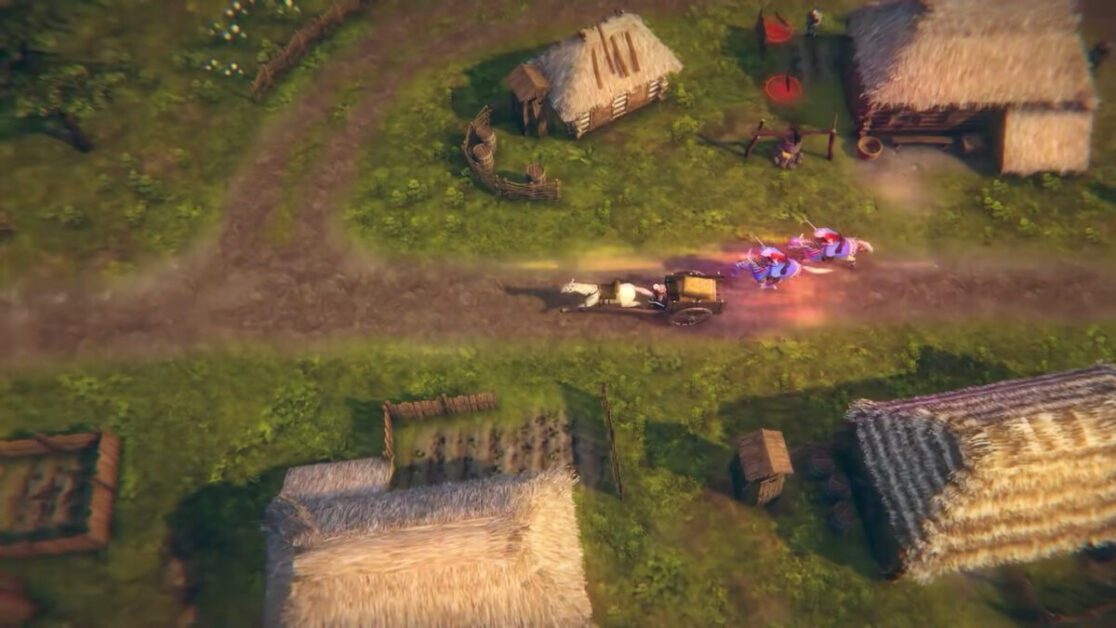 Long term fans of the Grand Theft Auto games will remember the days of the top-down camera angles. Though it’s been over 20 years since GTA II, indie developer Jutsu Games is going back even further to reimagine the genre in a medieval setting. ‘Rustler’ swaps grand theft auto for grand theft horse in a thuggery-fuelled romp through old town Britain.

If you’ve played an early GTA game, then you’ll feel right at home with Rustler. That’s the feeling that developers at Jutsu Games want to recreate with their work on this rekindling of a classic genre.

You play as a non-descript character who’s described as having ‘loose morals’. From there, the open world really is your oyster. Dressed in a humorous hybrid of medieval and modern decor, the land is filled with criminal opportunities and shenanigans to partake in. From grave robbing to completing bounties, you can build up a wanted level just the same as you can on the streets of Los Santos.

Bartek Gajewski, chief designer of Rustler, tells us about how the tried and tested gameplay mechanics of GTA have been adapted for a historic setting: “The gameplay in Rustler pays homage to the old GTA games, the first and second ones in particular, but it’s much different than that, for sure. Our horses are not cars, they have different dynamics. It’s a melee based game so it’s much more of a slasher than a shooter.”

There’s over twenty different weapon types to get to grips with, including shields, swords, spears, and even guitars. If you kill one of the bards that you can hire to follow you around, it’s possible to use their instrument as a tool of destruction. Jutsu is going all in on making Rustler a sandbox that’s totally at your beck and call.

Though the game is built around the player-driven sandbox, there is a main story that you can follow. Jutsu tells us that it comprises around 50 standalone missions and will take players about six hours to complete. All of the stats are tracked in game, so completionists out there have something to work towards.

Rustler takes on a completely medieval aesthetic for the most part, but elements of its modern inspirations shine through. Elements like illuminated parking signs indicate where horses can be parked, and a subtle blue and red glow accompanies sirens as law enforcement chase you down cobbled streets.

Beyond the decoration, Jutsu Games has had to think creatively when adapting modern technology for the middle ages. Of course, radio wasn’t a thing back in those days, so Rustler instead uses hired bards that sing olden interpretations of modern hip-hop classics.

Beyond the obvious comparisons to Grand Theft Auto, there are plenty of interesting sources that the team has pulled inspiration from. “We are inspired by a lot of movies – Monty Python in particular. This is the kind of humour that you can see in the game,” explains Gajewski.

“We also make fun of TV series’ like Game of Thrones and The Witcher games and TV series. If you know those then you’re gonna find some jokes about them,” he continues. Beyond direct references, Rustler aims to poke fun at some of the clichés of other fantasy media and games.

The road to launch

Rustler began as a Kickstarter project for the team but has since been picked up by publisher Modus Games. The publisher has enabled the team to further expand their vision, bringing Rustler to next-gen platforms and supporting features found on the PS5 DualSense controller.

Even so, Jutsu hasn’t left its original kickstarters behind and tells me that the small community has played a huge part in shaping how Rustler plays today. When it first launched into early access, feedback found that the game was a little too difficult. As such, the development team has since introduced an adaptive difficulty level that makes the game easier or harder depending on your performance. For example, earning a higher wanted level will mean that law enforcement have larger health bars – dying more often will reduce the amount of enemies you face.

Obtaining feedback from its Kickstarter backers is one of the reasons why the game is focused on its single player component. “We really enjoy that there is a wide community of up to 2,000 backers that are really eager to send us some feedback,” says Gajewski. “This is one of the reasons why there is no multiplayer in the game. We actually started the game thinking alot about multiplayer but once we went through kickstarter, it was only a small percentage of people that wanted that feature.

“We decided that we would get rid of it and not focus on that because if we would then it would take us at least half a year more to complete the game.”

Even without multiplayer, Rustler looks to be a fantastic call back to a genre that hasn’t seen much love in recent years. Rockstar’s unique sense of crude yet witty humour is emulated in everything from the writing to the game design. Jutsu Studios has set itself apart in this regard, and I for one can’t wait to see what other surprises it has in store for us.

Rustler releases on Xbox One, PlayStation 4, Xbox Series X|S, PlayStation 5, PC, and Nintendo Switch on August 31st. Did you play those classic GTA titles, and do you think Rustler lives up to the legend? Let us know across our social channels!