Against the odds, Ubisoft has revealed a new Scott Pilgrim game is coming to PC and console. Revealed during Ubisoft’s September 10 Ubisoft Forward event, the game is coming sooner than we could have expected!

Scott Pilgrim vs. The World The Game: Complete Edition is coming holiday 2020. The official description reads: “Scott Pilgrim is back! Team up with friends to battle your way through waves of tough enemies to fight for love. Share health and coins, compete in mini-games like Dodgeball, and challenge each other to an epic-last-one-standing duel. The Complete Edition, which includes Knives Chau and Wallace Wells downloadable content, will be available Holiday 2020 on PlayStation ® 4, the Xbox One family of devices, Nintendo Switch™ system, Stadia, Windows PC and UPLAY+.” 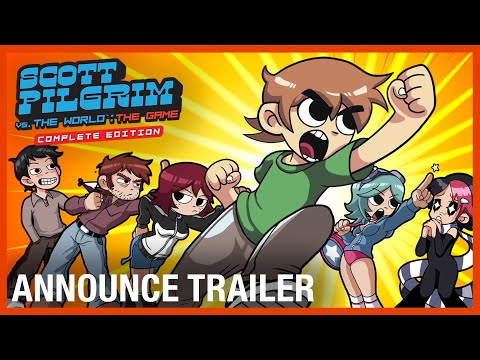 Earlier this year fans believed Ubisoft was teasing a potential new release in the world of Scott Pilgrim.

Back in May, the Scott Pilgrim movie became one of the flicks to watch with the crew, as the actors and even director Edgar Wright live-tweeted their experiences of filming the movie while the world watched together during a pandemic-friendly virtual screening.

People were quick to get involved using the hashtag “WatchWithTheAcademy,” and soon the hashtag became awash with people calling for a remaster of the 2010 game. It became so popular that Ubisoft picked up on it, responding to one tweet with a simple thinking-face emoji.

Ubisoft’s Twitter account responded to one fan’s call for a Scott Pilgrim remaster, replying with just the thinking emoji.

Edgar Wright even got involved, tweeting Ubisoft with: “Do it @Ubisoft ! X”

Although we weren’t sure whether or not the tongue-in-cheek tweets were actually pointing to a new Scott Pilgrim game, it seems our prayers have been answered.