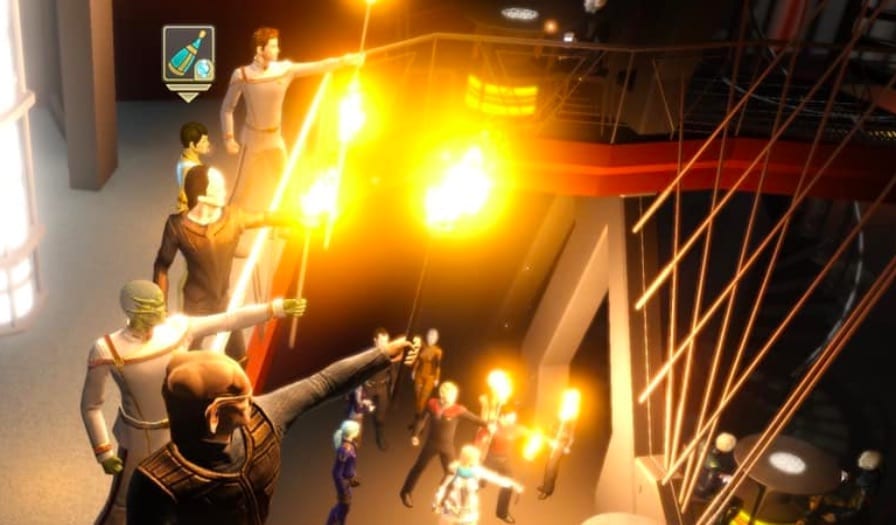 EDIT: We incorrectly credited a Facebook page for the image used, when all credit should go to @STOTheMadProfe1.

Nothing brings a fandom together like the sad passing of a seminal actor, and the passing of Aron Eisenberg was no exception.

Best known for his time on Star Trek, Eisenberg played Ferengi Nog in Deep Space Nine and even made an appearance in an episode of Star Trek Voyager. He also lent his voice to the tutorial section of Star Trek Online. The 50-year-old passed away on September 21, 2019.

Of course, Star Trek fans across the world weren’t going to let Eisenberg go before paying tribute to the actor, and they did it in what’s possibly the loveliest way ever – by holding a ‘candle-lit’ vigil at Quark’s Bar in Star Trek Online.

As shared to Reddit and the What Happens on the Holodeck, Stays on the Holodeck Facebook page [via PCGamer], fans gathered around the and lit torches to show their respects to the actor.

Fans of the series flooded the image with their own tributes, with one user writing: “‘It’s Only a Paper Moon’ got me through one of the hardest times of my life. This news hits really hard.

“I’ll forever be greatful [sic] for the dedication and love poured into the Nog character and how much it helped me. So sad.”

Another wrote about their own tribute to the actor, saying: “I was just in a small toast to him on psn we did a toast and i changed the colour of my defiant to black and gold, his colours.”

The gaming community can be wholesome AF at times. RIP Aron Eisenberg.

In rememberence of Aron Eisonberg, a torch vigil at Quark’s. from r/sto