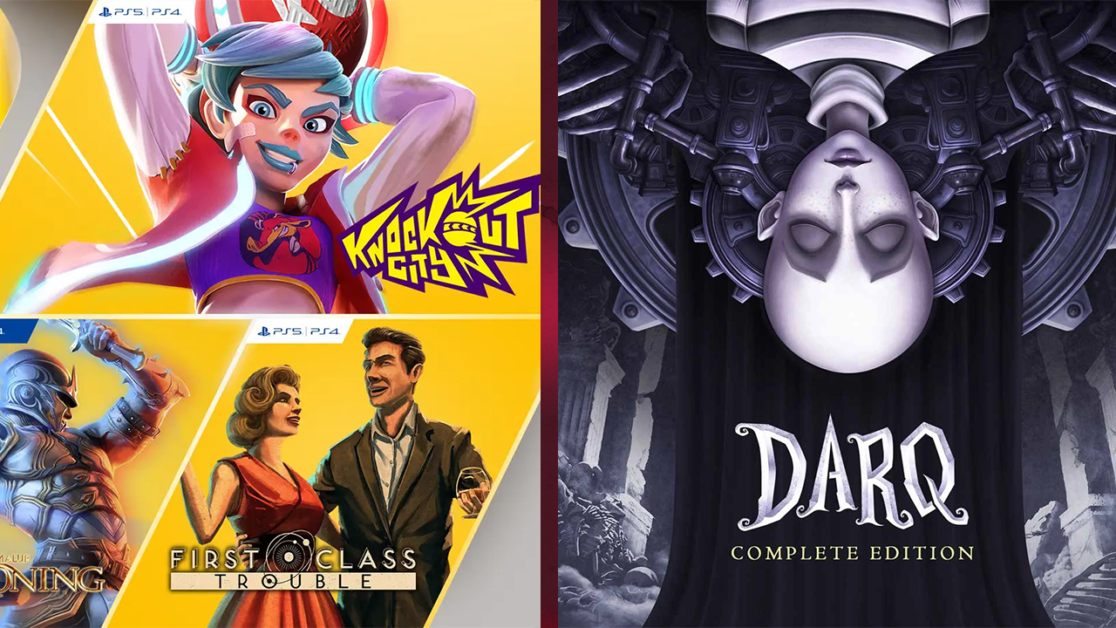 November may be the month of Black Friday and Cyber Monday bargains, but there’s no better bargain than a free game. Starting with the latest from the Epic Games Store, PS Plus, and then Games with Gold, we’ll look at what games you can claim with your accounts and online subscriptions. Then, we’ll go into the latest and greatest deals from the GameByte Shop – aiming to give you the best value on both upcoming and classic titles in the gaming.

Free at the epic game sTORE

First, we have Unfold Games’ 2019 horror puzzle adventure, DARQ Complete Edition. In this psychological horror, you play as Lloyd, a boy trapped in a lucid dream. Whilst exploring the dark corners of his subconscious, you’ll need to sold gravity-defining puzzles.

Careful planning is required as well, as you use stealth to avoid enemies who Lloyd would not survive against in open combat. Along with a unique art style, DARQ complete edition also features sound design by Cyberpunk 2077 and Hitman team member, Bjørn Jacobsen.

For those with an EPIC Games store account, DARQ Complete Edition is free to claim until 4 November 3pm BST. So, be sure to act fast!

Immediately afterwards, however, Aven Colony will be available from 4 November to 11 November. A 2017 strategic city builder simulation game, Aven Colony has you build a new home for humanity on an alien planet. Facing deserts, jungles, tundras, and alien life, you’ll be tasked with building and expanding your small colonies into massive cities. As a Colony Governor, you’ll need to manage your community and resources as well – being sure you’re built for the future and the tough times that come with it.

Free on Playstation plus

From today, PS Plus has brought into its monthly offering a stacked line-up. Celebrating PSVR’s 5th anniversary, PS Plus is giving to its subscribers 6 free games, 3 of those being VR titles.

The first is Knockout City, the team-based dodgeball multiplayer available for PS5 and PS4. You’ll be able to customise your character and get better the more you play. Learn how to knock out opponents with trick shots whilst coordinating with your team. Soon enough, you’ll be an absolute knockout.

Also for PS5 and PS4 users is First Class Trouble. A social deduction game, First Class Trouble is designed for six people to play together online. With four randomly assigned as “Residents” and the remaining two as “Personoids”, friends will be pitted against each other in a race to stop a rogue AI. Balancing teamwork and trust will be key to survival.

Just for PS4 players on this one is Kingdoms of Amalur: Re-Reckoning, a 2020 remaster of the original 2012 action role-playing game. Remastered with revamped visuals and gameplay, you’ll be able to engage in intense-yet-customisable RPG combat whilst playing as the first warrior to be successfully resurrected after death.

These aforementioned games are available and free to download for PS Plus subscribers until Monday December 6.

PSVR’s 5th anniversary celebration bundle offers a varied trio of games, perfect for those looking to expand their VR catalogue. Firstly, there’s The Persistence, a futuristic survival horror. Secondly, The Walking Dead: Saints & Sinners, adding the first-person VR perspective to the hit zombie franchise. Finally, we have Until You Fall, a fantasy hack-and-slash game, where you can move your arms and body to the soundtrack to fight off magic-infused monsters.

This selection of 3 VR games are available and free to download for PS Plus subscribers until Monday January 3.

Free with Games with gold

In Xbox’s November offering with its Games with Gold service, there’s 4 free titles available for members to download. Although, all are available at varied dates.

Starting with the game available for the whole month, Team17’s 2020 physics-based sim, Moving Out. Ready to claim from the 1-30 Nov, you start you a new job as a Furniture Arrangement and Relocation Technician (F.A.R.T.). Playing solo or with up to four friends in co-op, you need to be the best mover you can. All in the furniture-moving perils of action-adventure chaos.

From November 16 to December 15, Kingdom Two Crowns. A 2018 side-scrolling strategy game by publisher, Raw Fury, you play the role of a monarch. In a modern, pixel art aesthetic, players will need to build up their kingdom, at the same time protecting it from the forces of greed.

Next, available now until November 15 is Rocket Knight. A 2010 platformer from Konami, this revival of the Sega-era Sparkster series has you utilising your wits, rocket pack, and other tools to fight off the wolf army and save your kingdom.

Last but definitely not least, is the cape-crusading classic, Lego Batman 2 DC Super Heroes. The 2012 adventure-platformer by Traveller’s Tales is ready for you to claim from November 16 to 30, letting you play as Batman and Robin whilst saving Gotham from Lex Luthor and the Joker.

The Best Deals at the GameByte Shop

Including Call of Duty Vanguard and Grand Theft Auto: The Trilogy – Definitive Edition, the GameByte Shop offers a vast variety of competitive prices and deals on the latest games and accessories. Of course, these go perfectly with our GameByte Loyalty Points scheme: allowing you to sign up, earn points, and later redeem them for even more discounts on future orders.

Moreover, the following games and deals will be listed in alphabetical order. Simply click on the link attached to each title, and you’ll be taken right to its respective page in the shop!

The Best Free Games And Deals This October