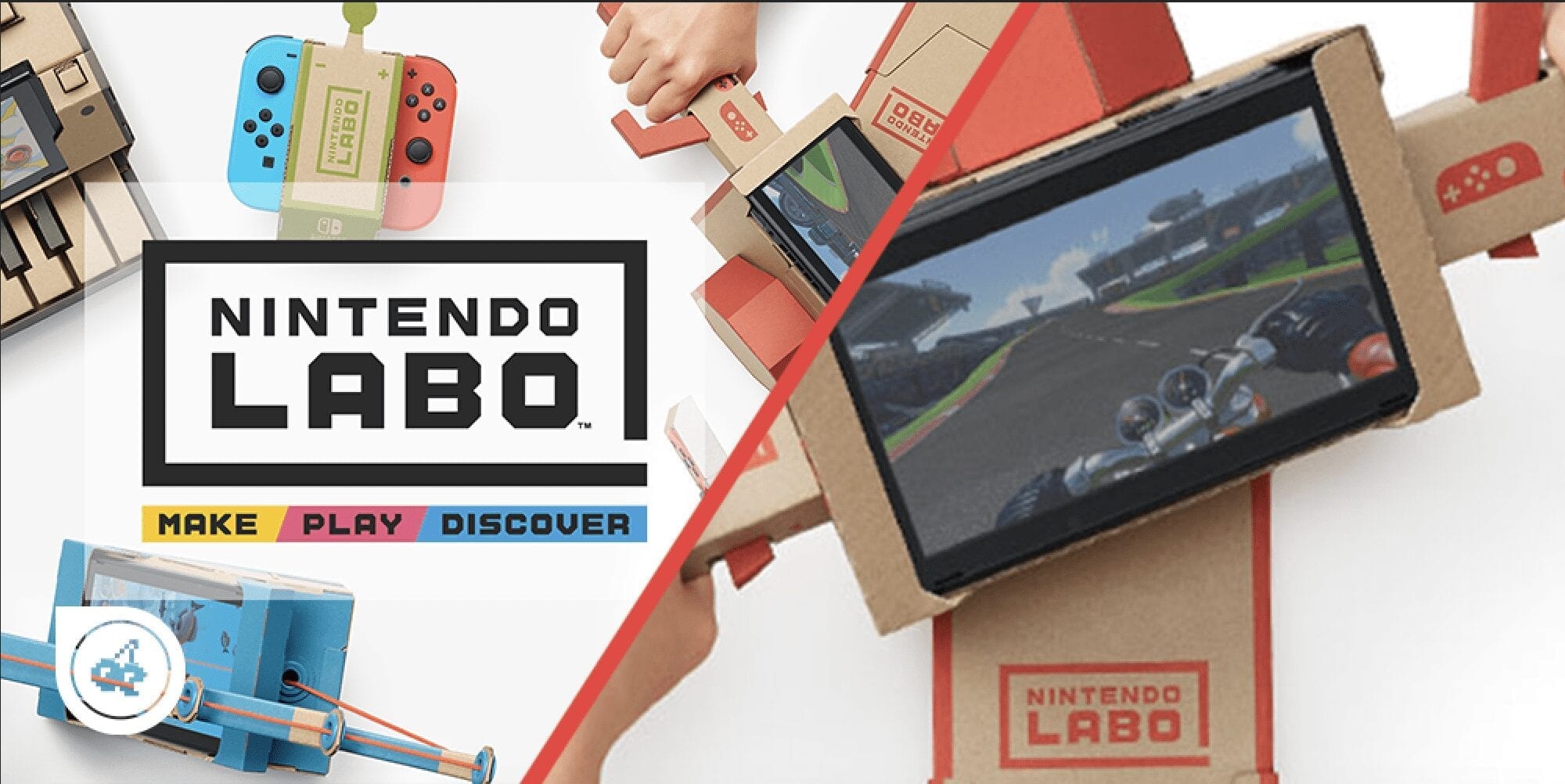 You can finally play Mario Kart on the Nintendo LAbo and we’re all kinds of excited.

You can now use the Toy-Con Motorbike with Mario Kart 8 Deluxe. Once you download the latest update just select the Labo icon in the main menu to choose the Toy-Con as your controller option, reports Destructoid.

Whilst other console manufacturers are pushing towards virtual reality, Nintendo wants to take a step back towards actual reality with their new Nintendo Labo range.

Nintendo Labo is a new product that’s going to launch later this year. The product will allow Nintendo Switch owners to create their own cardboard cut-out contraptions and incorporate their Switch into the contraptions in some way.

It’s an odd concept to get your head around, so I wanted to remove any confusion and explain how the product will work and what it’ll be able to do.

Let’s take a look at what the Nintendo Labo actually is and why I think it could be a neat addition to the Nintendo Switch lineup.

What Is The Nintendo Labo?

Nintendo Labo is essentially a construction kit built out of cardboard. Owners of a Labo kit can use it to create a number of different pre-built designs. Think of it like Lego, but with folding cardboard pieces.

The concept behind Labo was to teach children about engineering and physics and provide a younger audience with a method to use their Nintendo Switch in meaningful ways past just using it as a gaming console.

I can see it performing well as a stuffing filler on Christmas, but how well will Labo perform in the video game industry? Can it stand up as a valuable product, or is it going to be dead on arrival?

What Can You Actually Do With It?

There are going to be a variety of Labo kits that Nintendo Switch owners will be able to buy. Each kit will contain a selection of prepared cardboard pieces that can be folded and connected together to make some kind of tool or accessory for the Nintendo Switch.

The kits will smartly incorporate both the Nintendo Switch display and the Joy-Cons into the cardboard creation.

There are, in total, two different kits planned for the Nintendo Labo range at launch. I’ve provided some details about what each of these kits can do below.

The Variety Kit contains a total of five different creations that owners can put together. The first is a remote-controlled car. The Joy-Con acts as the main chassis for the car and vibrations from the Joy-Con can steer and move the car. Software on the Switch will allow people to control the car.

The second toy is a fishing rod. The rod will connect both Joy-Cons in a way that allows players to use the fishing rod as a motion-controlled controller for a Nintendo Switch fishing game.

The third toy is a toy piano. The cardboard piano will house the Nintendo Switch and pressing each key will make the Switch play different sounds.

The fourth is a motorbike that turns both Joy-Cons into the handlebars – once again, you can use this controller to control a Labo game. There are no details yet whether this motorbike can be used to control other racing games.

The final item in this kit is a small house. Once the house is built up, owners can use a slot to insert different items into the house to interact with the Nintendo Switch software in different ways.

The Robot Kit is a standalone kit that includes different parts for players to create their own wearable mecha suit. The suit can sense motion of the player’s head movements and hand/feet swings by using the motion-sensing capabilities of the Joy-Cons.

It should be noted that this isn’t a VR kit, although some did speculate that this was the case after seeing the trailer.

How Much Does It Cost? 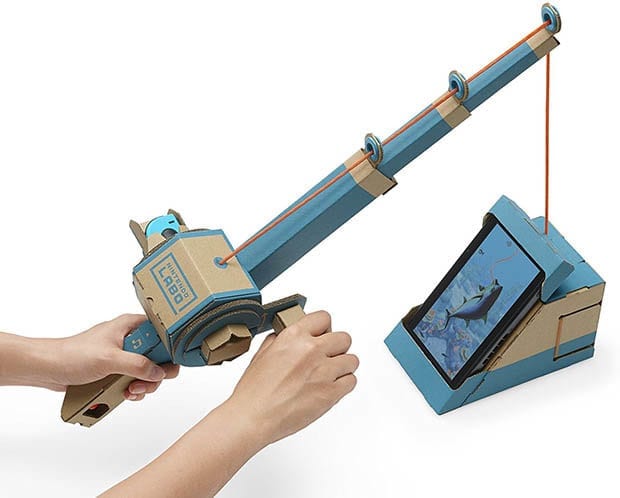 Because there will be different kits available in different regions, the price for each kit will vary. At launch, the Robot Kit will be available for $79.99 or your country’s equivalent, whilst the Variety Kit will be $69.99.

There’s also an additional sticker kit available for $9.99 that’ll include a number of options for Labo Kit owners to customize their own creations.

The cardboard does seem to be of fairly good quality, but there are some questions about how long the product will last before it inevitably has to be recycled.

As for the release date, the Nintendo Labo kits will be available worldwide starting on April 20th.

Will There Be Future Kits? 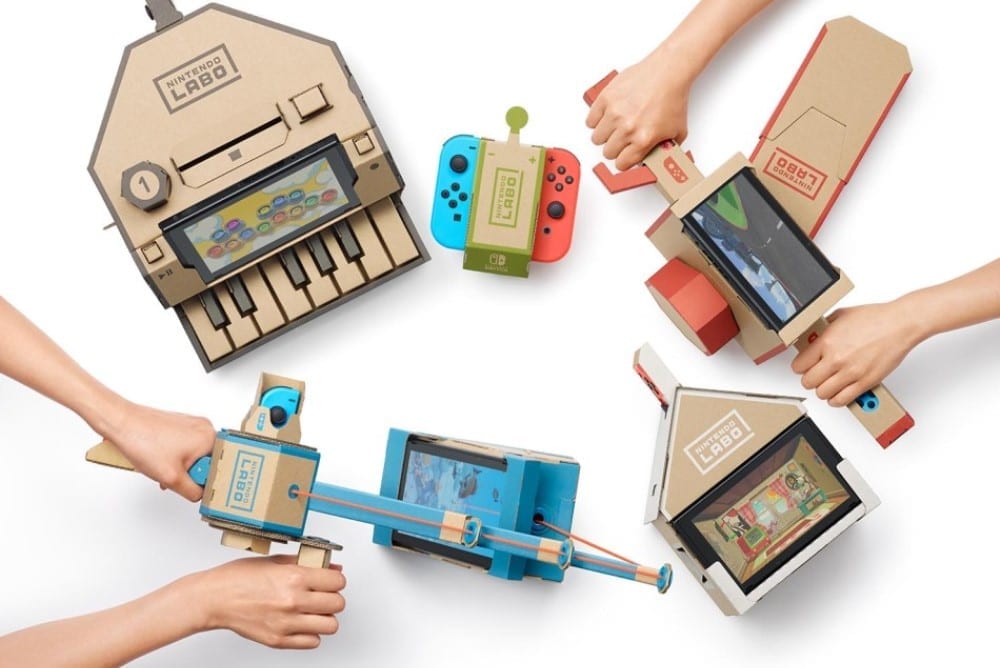 We have a feeling that Nintendo has lots of plans for future Labo Kits, but whether they see the light of day or not will depend heavily on how these two initial kits sell. This is such a niche product, especially for the video game industry, so there’s a lot of uncertainty about how such a product would perform.

It’s clear Nintendo want to branch out and become that true handheld console for children around the world, so even if Labo dies out quickly, we can expect similar ideas and products for the Nintendo Switch in the future.

What are your thoughts on the Nintendo Labo? Could you see yourself picking it up, or do you think it only really appeals to a younger audience? I’m a big fan of seeing new, innovative ideas from Nintendo, even if some of their products don’t appeal to me personally.

It’s quite clear from what we’ve seen that this new Nintendo Labo range has been designed to cater to a younger audience. The product is mostly marketed as a toy, and whilst software and games are included with each Labo kit, the gameplay value with these kits is likely to be very basic.

This is only speculation on my part, but I’m expecting the games and software available to be short mini-games that’ll lose their replay value fairly quickly. The main selling point for the Labo kits will be for children to have fun whilst learning how to build and engineer different items.