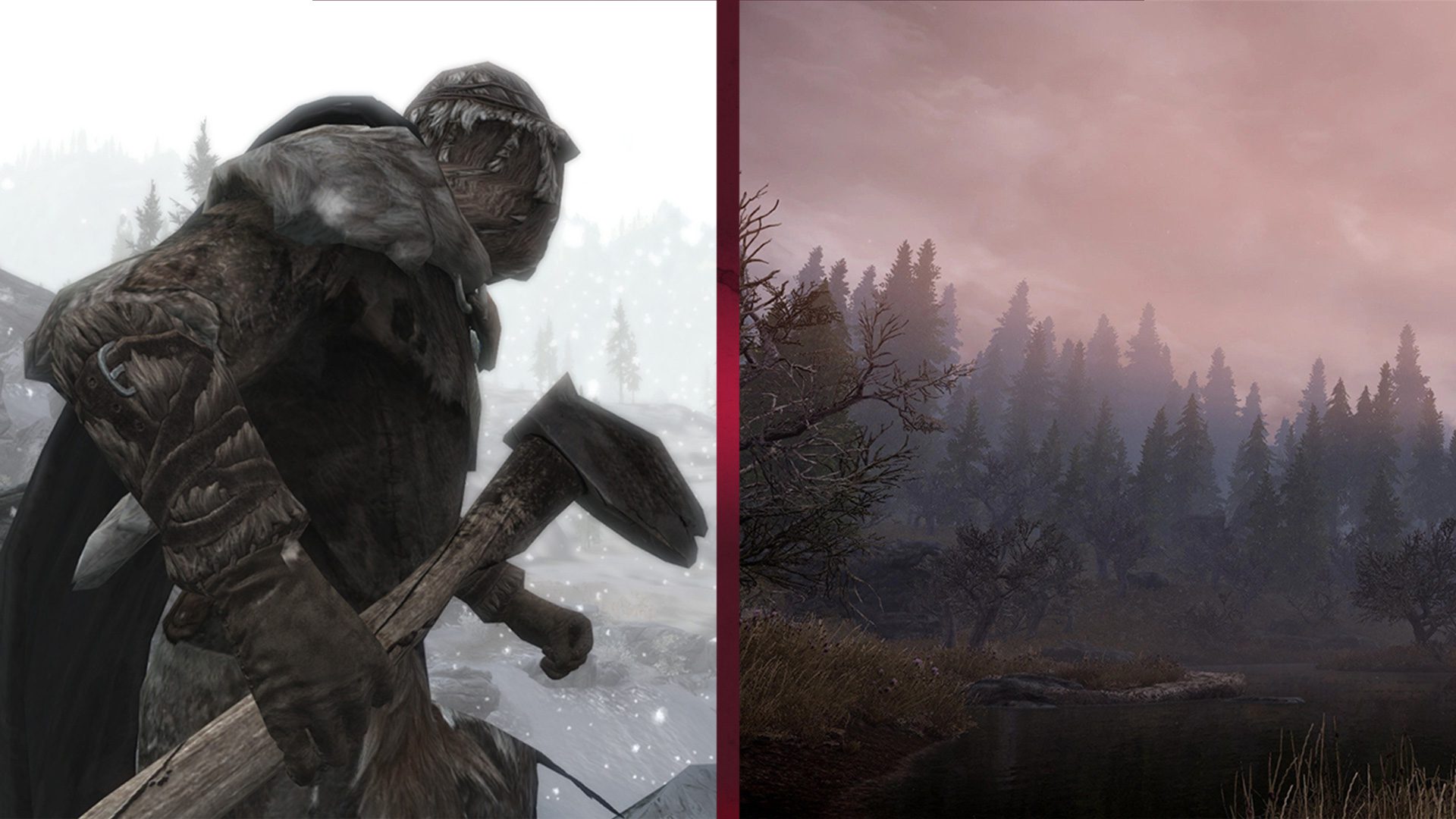 No, I can scarcely believe it either – Skyrim is turning 10 years old this year. That’s a whole decade we’ve had to explore the northern realm of Tamriel, clearing dungeons and rising up through faction ranks. What a glorious ten years it’s been.

Of course, the base game of Skyrim is only half of Bethesda’s success story. Without a steadfast community of modders, the game surely wouldn’t remain as prominent as it is today. No matter how many versions Bethesda decides to release of its beloved game, there’s no discussion of Skyrim without mods.

Though players might be tempted to wait for the upcoming release of Skyrim’s Anniversary edition, there’s plenty of fun still to be had with the original. Here are five mods that can completely transform the way you play Skyrim.

We can all recite the introduction to Skyrim in our sleep by now. ‘Hey, you. You’re finally awake,’ followed by the Helgen attack, then on to Riverwood, Whiterun, and so on. While a classic series of events, it’s something that does get a little stale on the ninth playthrough.

Alternate Start – Live Another Life is a mod that completely remixes the beginning of Skyrim. Instead of waking up as a prisoner in the back of a cart, you awaken in a grimy prison cell, a neat callback to Oblivion. Speaking to a Statue of Mara, you can then flesh out your backstory by answering a lengthy questionnaire.

Your answers will determine the sort of character that you’re roleplaying as. For example, you can choose to be an established property owner in Skyrim, or admit to being a member of the Dark Brotherhood. This will then spawn you somewhere relevant in the world with an established backstory, and relevant gear and spells.

Live Another Life is perfect for those that have played through Skyrim plenty of times already. It kick starts a new playthrough to the far more interesting parts of the game, and encourages you to stick with role playing as a different archetype. That said, you and I both know that you’ll fall back into your stealth archer ways anyway.

If there’s one area that Skyrim could do with some love, it’s in combat. Don’t get me wrong, it’s perfectly serviceable. However, clunky animations mean that it’s impossible to perform multiple actions at once. Going back to it after playing more modern games highlights how this aspect of Skyrim hasn’t aged so well.

Combat Gameplay Overhaul does a good job at bringing the dated combat up to scratch. It does this by separating movement of the player’s upper body from their legs. This now means that players can move freely without interrupting attack animations. As a result, melee attacks feel far more fluid as you can essentially dance around opponents much more fluidly.

The improved movement system also opens up the possibility for new attack types. It’s now possible to perform slam attacks from above as you dive onto enemies from great heights. That accounts for bows, too. Arrows can be fired in mid-air for all those sick 360 no-scopes that the Dragonborn is known for doing.

Another near addition is the dodge-roll. Some incredibly slick animation work adds this handy feature for diving out of the way of big attacks. This works in both third and first person perspectives, and looks less jankier than you’d think. Get this mod installed if you think that the dated nature of Skyrim’s combat will bug you after all these years.

Skyrim’s UI is fine when playing on console. However, all of those menus are cumbersome when operated with a mouse and keyboard. There’s a lot of swiping through columns to be had with items ending up getting buried deep within inventories.

That’s where SkyUI comes in, a fan favourite of all the Skyrim mods among the community. This completely overhauls the user interface for Skyrim, laying out inventory information in a manner that’s much more friendly to the mouse and keyboard. Scanning your inventory has never been easier with easy to use filters and even a search menu.

It’s fully customizable, too. The icons at the top can be swapped out for a few different presets, and the menu font can be made larger or smaller as you desire. If, like me, you struggle to read small text on a computer screen, SkyUI is worth it for the accessibility benefits alone.

Other neat additions include a search menu for the world map view and a far better favourites menu. If you’re using lots of other mods alongside SkyUI, many of them might actually require this mod. Plenty of modders use SkyUI as a hub for changing the settings on their own creations. You can find the Mod Configuration Menu right from the pause screen when SkyUI is installed.

For such a cold and deserted place, there are never any real repercussions for not dressing according to the weather. If you’re looking for more of a survival experience in your next playthrough, then consider installing Frostfall.

This mod adds a few new variables to your character sheet – temperature, exposure, and wetness. These are all properties that you’ll have to manage while wandering the frozen tundras. The mod operates as you’d expect – getting wet while it’s snowing will drastically increase your exposure. As such, you’ll need to wear appropriate clothing while travelling between locations.

You can also combat the threat of exposure by eating warm foods or by sitting near a warm fire. A plugin for the mod adds a camping mechanic to the game, letting you set up campfires and tents for the night along your travels.

At some point, though, you might find yourself succumbing to the cold. The mod gives you two options here: you can either set the mod to kill you instantly when your exposure hits maximum, or you can choose to be rescued and taken to the nearest inn. It’s up to you how harsh you’d like to make the mod, but it adds a fun sense of danger to an otherwise tedious task.

Last up, you knew we couldn’t write a list of Skyrim mods without including a graphical ENB, right? ENB [Enhanced Natural Beauty] mods are plugins that take control of a game’s lighting systems. They exist for plenty of other titles with Grand Theft Auto V being another popular implementation.

The best thing about ENBs is that they can be fully customised to suit your personal preference. As such, there are now thousands of different variants available to choose from. One of my favourites is Silent Horizon’s ENB which makes Skyrim look as though it could have been released yesterday.

The mod works to drastically improve the volumetric lighting, making the world seem far more saturated and pleasant to look at. When indoors and at night, individual light sources emit and project much more naturally, creating much more depth in the game’s scenes.

While it looks gorgeous, it will no doubt be a big hit to your PC’s performance when installed. If your rig is up to the job, however, it’s definitely worth giving this ENB a go. You can even tweak the settings incrementally yourself to get that picture perfect look.

What are your favourite Skyrim mods? Let us know across our social channels.