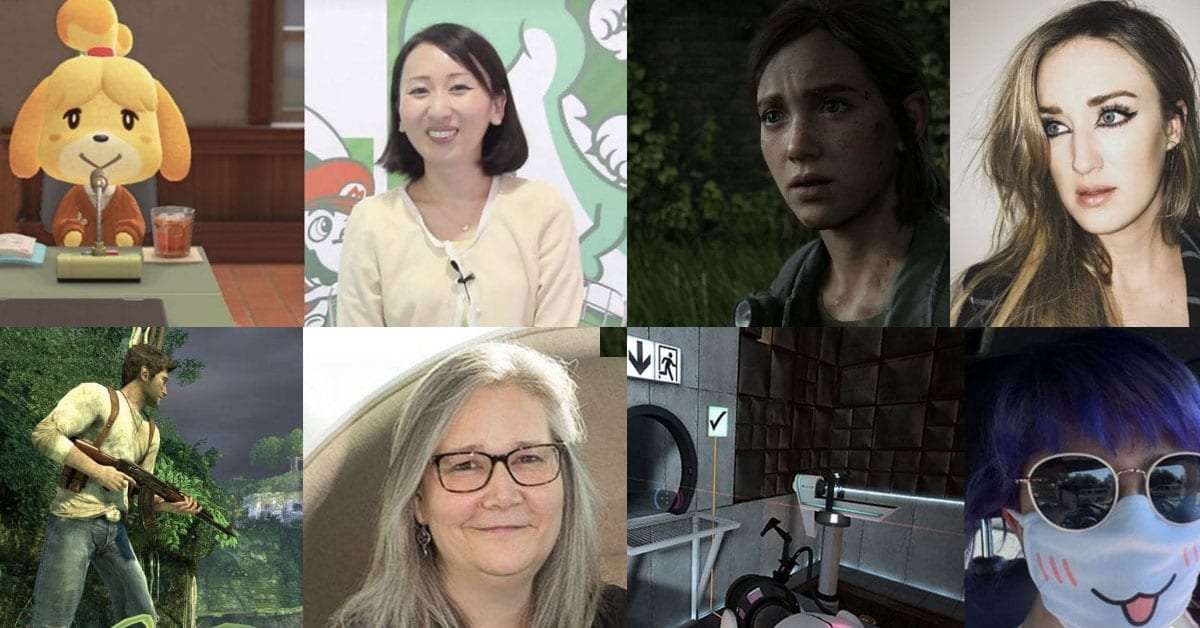 Many of you will be familiar with the Uncharted series where you play as the incorrigibly charming protagonist, Nathan Drake. In its DLC, The Lost Legacy, you play as the equally charming Chloe Frazer. While the series is often simply credited to Naughty Dog, it’s thanks to Amy Hennig it exists at all.

Being the creator of Naughty Dog’s hugely successful series, she has been responsible for the Indiana Jones-esque adventures we undertake as we traverse the world in search of treasures (which happen to also be very popular with bad guys), defeat too-rich-for-their-own-good enemies and, of course, play Marco Polo in abandoned bodies of water.

In 2014, Hennig left Naughty Dog to pursue other ventures and in 2019 launched an interactive studio, Skydance Media. Her ambition is to create games that encourage gamers and non-gamers alike to play story-focused titles by embracing the VR and streaming age. You can keep up to date with Hennig’s projects on Twitter.

Aya Kyogoku is a video game director and producer who has overseen some of the biggest Nintendo franchises we know today. A lockdown favourite and one of the most popular games out there is arguably one of her most notable works – that game of course being Animal Crossing: New Horizons.

Your many nights listening to the dulcet tones of K.K. Slider and days picking weeds after discovering time-travel are owed thanks to Kyogoku, the director of the game.

Teamed with producer Hisashi Nogami, Kyogoku had to strike the fine balance of maintaining the charm of the Animal Crossing series that made it a success, while reinventing it to entice old and new players alike. The game introduced island living with extensive customisation, Nook Miles, and the ability to search for your perfect islander (a.k.a. Sherb)! Thank you, Kyogoku!

Kim Swift and a fellow group of graduates developed a game called Narbacular Drop, the spiritual predecessor of the gaming classic that we know as Portal. As the lead on Portal and as level designer, Swift reaped success for the game’s innovative design and now, status as a defining game of the platforming genre. She also found success with other Valve big hitters such as Left 4 Dead and Half-Life 2.

In 2017 Swift became EA’s Motive Studios’ Design Director and most recently hosted the 20th Game Developers Choice Awards in March of last year, awarding those outstanding game developers and video games that helped us get through 2020.

It may be of no surprise that I have included Ashley Johnson on this list. Johnson is, of course, perhaps best known as the performance actor for Ellie in The Last of Us series. It’s no easy feat to sell a performance that has the player’s heart aching as much as the character’s, yet Johnson managed to do so in TLOU Part 2.

Given her performance in the second installment, it’s no wonder that Johnson scored a nomination for “Best Performance” at The Game Awards 2020!

If you’d like to catch her in action you can watch her play D&D over at Critical Role on Twitch where she plays characters that aren’t quite as devastating in a light-hearted, fun setting.

Laura Bailey is the performance actor behind one of the most polarising characters in video game history: The Last of Us Part 2’s Abby. Whether you loved or hated the new character, Bailey’s incredible performance was second to none, even scoring her the win for “Best Performance” at The Game Awards 2020.

Bailey’s name should be familiar to video game fanatics, as she’s one of the most prolific actors in the business. The actor has also appeared in games like World of Warcraft: Shadowlands, Marvel’s Avengers and Gears 5. In short, she’s definitely one of the biggest names in gaming.

The women listed here are only a select few from the list of women that have made and continue to make great games. Let’s also not forget the women who create gaming content for us to consume on the daily, either through streaming or YouTube videos.

The women who contribute to the industry make it a more exciting place. The diversification of the industry equals the opportunity for new voices, content, concepts, and games for us all to experience. Of course, the list is sadly nowhere near as long as it would be if I were to look up men in the industry. However, as the industry expands so will the contributions of great minds and talents (who happen to be women). And that is worth celebrating!