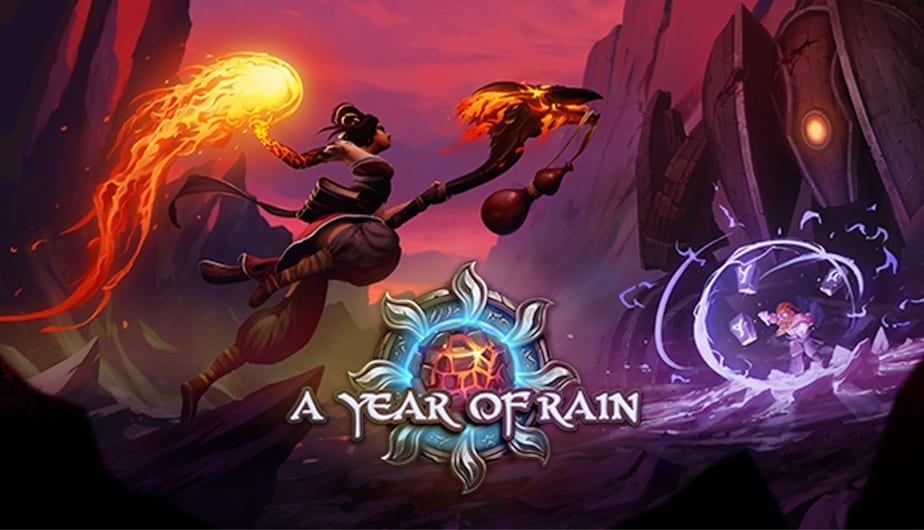 It’s pretty hard to find a pick-up-and-play strategy game for those entirely new to the genre. With a steep learning curve and a hugely competitive online presence, getting into strategy isn’t the easiest of ventures. Thankfully, it’s something that Daedalic Entertainment wants to change with its upcoming title, A Year of Rain.

A Year of Rain is a real-time strategy game featuring original music from award-winning composer Neal Acree. Promising to be both a learning platform for new players while also offering tougher challenges for experienced RTS gamers, A Year of Rain is essentially ticking all the boxes when it comes to wide appeal.

Speaking with GameByte during Gamescom 2019, A Year of Rain‘s developers, producer Ralf and Lead Game Designer Christoph, showed off a little of the gameplay and chatted about what we can expect from the title.

Introducing the game, the team explains that A Year of Rain allows you to choose one of three rival factions with the aim of base building, resource gathering, unit recruiting and battling against other players online or in a campaign mode against AI.

Sitting down to tackling the RTS classic 2v2 skirmish mode, the duo are happy to offer pointers and talk us through strategy, explaining that this is just one of the modes A Year of Rain has to offer. Along with the skirmish mode will be campaigns and an “Against all Odds” mode, where “two lone heroes face two entire armies, who have full command over units and structures.”

One of the things the developers are clearly most proud of is how accessible A Year of Rain truly is, with a huge focus on appealing to both new and existing RTS players.

Me, as someone who doesn’t have a particularly affinity with RTS games, didn’t struggle to get into A Year of Rain despite being more than a little rusty.

“We try to use a lot of conventions from traditional RTS games, so we hope people feel at home when they see it the first time and maybe make some comparisons as well,” says the dev. “What we tried to do is remove features first that we think are inaccessible or really hard to understand.”

Giving an example, he adds: “The rock paper scissors system that we have is way more streamlined than others. There’s no armour and weapon types. In other games you have a lot of different things that come together that you have to learn about and for us it’s just: melee beats ranged, ranged beats caster, and caster beat melee. That’s the one thing you have to learn.

“We have other features like a guide which really helps you, with a shopping list feature of what you can or should build in order to get a good and balanced army at the start…

“The single missions in the campaign will teach you step by step what to do, how to play an RTS…We’re focused on streamlining the game and making it more approachable for new players.”

Does that mean that A Year of Rain is only for new RTS players? Absolutely not, say the devs. In fact, competitive tournaments are already happening for the game, proving that the challenge is there if you’re looking for something a little tougher.

“[A Year of Rain] has a very high skill ceiling – we also want to have the possibility for players to play really competitively.

“We’re trying to be realistic [with esports]. You can’t do it overnight. Our first steps are getting the balancing right, which is the most important thing in order to have a competitive scene.

“But we’re trying out tournaments and streams every Wednesday on Twitch, where we have a mix of people playing the game. There’s some pros in there, and we’re finding out what works right now. We’re looking at creating more tournaments and more on the pro scene, but then again we also want the campaign to be super finished for everyone who likes story-driven games.

“For us, it’s gameplay first, try to get all the gameplay really polished and then everything else.”

Although Daedalic explains that campaigns are in the works for the future, right now it’s working as a team that’s the main focus for Year of Rain, with every game mode – including the 2v2 skirmish mode – “designed for co-op play.”

“We tried to focus on really small-scale battles, where every unit is important and you have to cycle through units, using abilities of your heroes for example,” say the team.

“It’s very interesting that traditional RTS games like Warcraft, Age of Empires, they inspired other things like Mobas. Warcraft spawned Dota, Dota spawned League of Legends and so on. Nowadays we see features in games like LoL that we like. For example, we have boss enemies on the map that you can only defeat together, and that’s not very traditional RTS but we liked it very much because of the co-op gameplay.”

A Year of Rain will launch in Early Access later this year. Check it out on Steam right here.

Daedalic Entertainment kindly sponsored GameByte’s trip to Gamescom this year by covering the cost of travel and hotels.