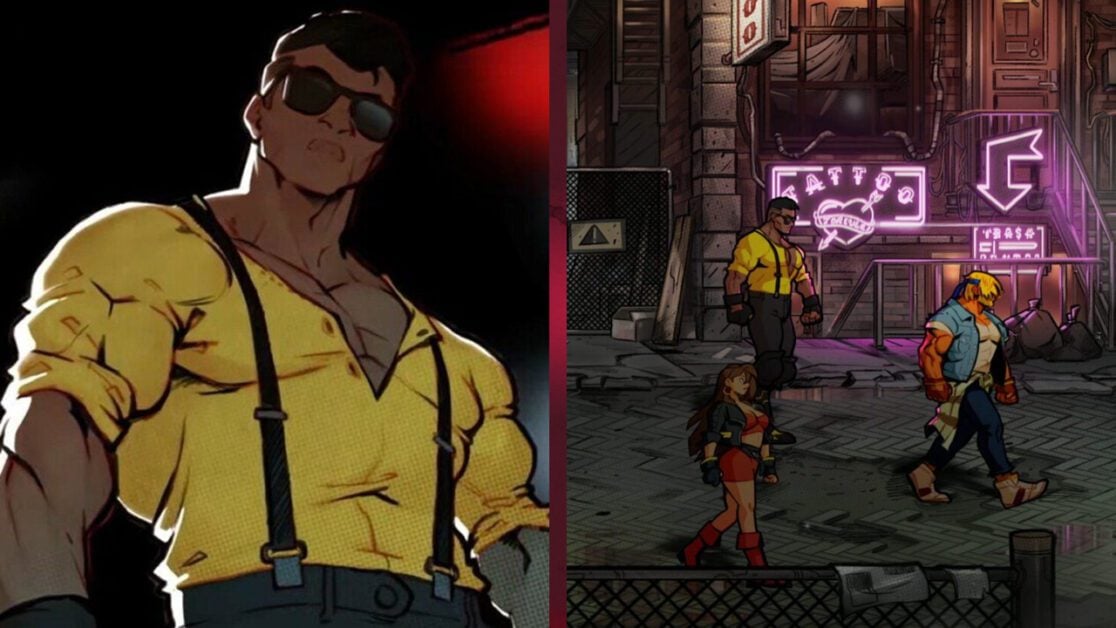 Growing up beat ‘em up games were my thing, perhaps because I wasn’t as good at virtual racing or mano-a-mano fighting as the other kids. Although tall and strong, I wasn’t much inclined towards sports, but I had my share of anger and so decimating hordes of foes on my SNES screen was a way to vent my frustrations and kill time and it was even more satisfying when the slaughtering was done with an amigo.

I rented a lot of times Super Double Dragon (1992), Final Fight 2 (1993) and Spider-Man and Venom: Maximum Carnage (1994). At first, we didn’t have a Mega Drive system at home, so I had to visit others to play it and get my hands on the Streets of Rage (Bare Knuckle) series.

The first time I played it, the soundtrack stuck in my head and I picked Adam Hunter because of his yellow shirt and his flying kick, although he is a slow walker.

In later chapters, since Adam was gone, I would play as Axel or Blaze as I favour more balanced types over powerhouses or agile fighters. I know they are for beginners but I never said I was a good player myself.

‘he grabbed my attention because of his profile’

Choosing Adam, at my friends’ place, felt like those times when you have a playmate from the other classroom or another city, someone that you enjoy spending time with, but you seldom meet them. Now I play as him in the Streets of Rage 4.

Looking back today, I know he also grabbed my attention because of his profile. Growing up, aside from my maternal grandfather, I would look up to male figures in TV and movies. The Brazilian media for long portrayed – and still shows – Black folks as punchlines.

In the past, there was a trend of slave themed soap operas which I hated because the following day kids would imitate the sounds of whips or spill racist insults to get under my skin. I had to keep my cool because I couldn’t afford to get expelled from private learning institutions.

With the lack of interesting figures in my country and the fact that soap operas are one of its main cultural products, my dark brown eyes had turned to American media and their players.

Carl Weathers turn as the talented and charismatic Muhammad Ali adjacent boxer Apollo Creed in the Rocky series; Danny Glover as the diligent father figure Sgt. Roger Murtaugh in the Lethal Weapon series; and my favourite, Philip Michael Thomas’ suave, sharp and streetwise Det. Ricardo “Rico” Tubbs in Miami Vice. I was somehow attached to them, but couldn’t explain as I can today.

‘I grasped more on how representation matters’

As a kid I would play with whichever character suited my style more, as winning was what mattered at the time – and still does –, today by looking at the trio from TV and movies mentioned earlier and seeing the changes we are experiencing in the world, I grasp more on how representation matters.

Streets of Rage has a trump over some other entertainment products because it brings inclusivity without being intrusive. The characters never felt just thrown there to appeal to a certain audience or a social cause.

Adam started as a main name and later became a supportive character. On the Japanese cover of Bare Knuckle, he appears alongside his white friends Axel and Blaze, though in the American version he is omitted, a stance that has been criticised for showing shades of racism.

Still, as the saga advances, he is the only one that stays within the police ranks while the others become vigilantes. It is known the enmity between law enforcement and minorities, in particular Blacks, reached its boiling point with the death of George Floyd in 2020.

Brazil has its share of police brutality towards black people, two stories that stand out are the torturing and slaughtering of Amarildo de Souza in 2013 and the killing of teenager João Pedro Mattos Pinto in 2020. Both stories in Rio de Janeiro.

I hail from the neo-noirish São Paulo, which has more organised law enforcement institutions than the tropical Rio, yet it has its own share of problems as for a considerable amount of times I’ve been racially profiled with cops pointing guns at my body, aside from that I’m always looking over my shoulder when outside to avoid being robbed by gangbangers.

With high levels of criminality, I can say that down here in my country lies the real Streets of Rage.

I still have to believe that there are honourable people among law enforcement as Harry Dunn, the African-American who endured racist slurs and physical attacks while defending the Capitol at Washington, DC from far-right extremists. Because if the cops like Murtaugh, Tubbs and Hunter live only in fiction the world seems even bleaker.

The game Streets of Rage has always depicted police corruption and, in its fourth instalment, the player can clobber some dirty cops. As I interviewed its developers for Brazilian and American media, I found that the game’s main goal is to entertain people and the themes touched on it just coincided with the turmoil going around the globe, games take years to develop from the brainstorming to its release, including character creation.

The relevance of Adam Hunter to Black gaming history

Aside from being a person with a steady job, Hunter is also a family man, who looks after his kid brother Eddie “Skate” Hunter and his daughter Cherry, and is not shy to jump on fire to protect them while also being a trustworthy friend. A positive portrayal of a Black character with family bonds who is also an ethical cop.

As a journalist, I have covered boxing and I’ve always found this art is portrayed one-dimensionally in games. The majority of boxers follow the slow-heavy hitter stereotype coming after Street Fighter’s Balrog (Mike Bison in Japan), a likeable villain, still a Bizarro world pastiche of Mike Tyson, a boxer with more technical skills than meets the eye of the casual fan.

In his fighting repertoire, Adam shows a more polished move set focused on close range and technical prowess, including kicks and knee strikes. As a practitioner of amateur wrestling, I believe he has a very powerful and refined suplex. He suits my way of playing better than Balrog and his derivatives.

In Streets of Rage 4, Adam sports shades that give a vibe of someone unravelled and dangerous at the same time. Of someone that can strike when not expected as symbolized by the wolf shades that appear when he unleashes his special moves.

‘adam is my avatar’

Although not narratively focused, Streets of Rage 4 has more polished characters than its counterparts, and this boxing lawman is among them.

Adam doesn’t show much in lists of positive Black characters in Black History Month; still, this virtuoso is a very interesting one and this feeling became stronger to me as he returned as a playable character to the franchise. Seeing someone with my skin tone who isn’t a sidekick, a villain or a complete sideshow feels somewhat satisfying.

Streets of Rage may share some similarities with current world problems, but I don’t like to theorise about them while playing because it is what I’m doing in order to escape from reality and our painful daily struggles.

Adam is my avatar alongside Shiva, who is a Buddhist like myself – story for another time – and the feeling is of a blossoming friendship in a later stage in life with that kid who I used to play with sporadically.

This character feels like a boy that is Black like me from those private schools but we never had the chance to tag along. Someone that looks like me or my idealised version of myself and is helping me to navigate through the pandemic and the economic-political crisis as well as anxiety and depression.

Mayhem Brawler Is More Than A Streets Of Rage 4 Clone

Famous Streets Of Rage Move Has Been ‘Mistranslated’, Says Composer

Players Are Recreating Their Pets In Monster Hunter Rise