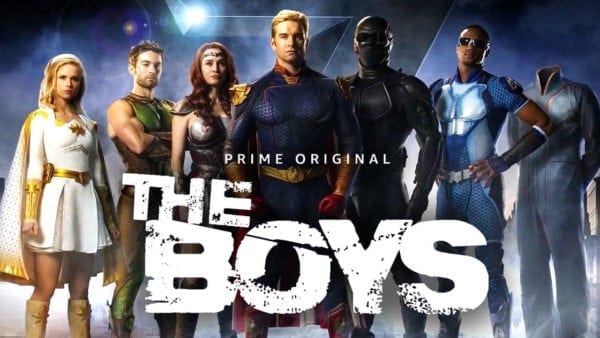 Throwing around the title of best TV villain of all time might seem like overkill, but if anyone disagrees, chances are they haven’t seen Amazon’s The Boys. Eric Kripke’s sexy superhero series adapts Garth Ennis and Darick Robertson’s grisly comics and definitely lives up to their promises to ‘out Preacher’ Preacher.

Breaking Bad had Gus Fring cooking his meth, Lost had Benjamin Linus as a human punching bag, The Walking Dead made a terrifying pirate out of the Governor, and who didn’t hate Joffrey on Game of Thrones? However, all of the above are certified saints when compared to The Boys‘ Homelander.

Effectively the show’s very own Superman, Antony Starr zips around the screen in his patriotic blue suit and star-spangled cape. From the very first episode, it’s clear Homelander is in charge here — well, in charge of The Seven at least.

Ruling the roost of this superhero Justice League, Homelander slaps a sinister grin on every situation and does the best to control his picture-perfect image. It doesn’t take the use of Homelander’s X-ray vision to work out there’s a dangerous sociopath lurking under the surface of that spandex.

Alongside Homelander’s bullying of members like The Deep, there’s a quick realisation Queen Maeve is the victim of an abusive relationship. Season 1 only scratches the surface of what happened between Homelander and the team’s very own Wonder Woman, but there’s an overarching feeling she doesn’t have much say in who calls the shots.

Perhaps the most jarring example of this is when Homelander and Queen Maeve attempt to save a hijacked flight of innocent passengers. It slowly dawns on Maeve and the doomed travellers that Homeander’s ulterior motive will see the plane plunge into the abyss. This is just the start of understanding how (despite her powers) Maeve is little more than abused housewife bending to Homelander’s will.

Much more than just an unhinged villain who wildly shoots his laser eyes at whoever he wants and is more worried about getting blood on his suit than the lives he claims, Homelander has a purpose. Organising his own cell of undercover superhero terrorists, he engineers a plot to get supes in the army AND get himself free from the tight constraints of Vought International.

There are plenty of comparisons to be pulled between Homelander and Watchmen’s Ozymandius. However, whereas Adrian Veidt has some noble qualities with a convoluted plan to kill millions and save billions, Homelander is only out for himself.

While he’s undeniably the poster boy of The Seven and Vought International, Homelander is bored of being a corporate stooge. His intentions aren’t for the greater good though, he’s simply a little bored of being an all-powerful god. Speaking of which, Homelander’s warped relationship with the faceless conglomerate leads to Season 1’s shocking finale.

It was lasers at dawn as Homelander, Butcher, and Madelyn Stillwell had a showdown at her home. Deciding he’s had enough of being Stillwell’s puppet, he promptly shot a laser through her skull and bumped off his boss/lover.

Season 2 looks like it will continue to explore Breaking Bad‘s Giancarlo Esposito as Stan Edgar — Stillwell’s boss. Here’s hoping Edgar goes full Gus Fring and manages to ‘spank’ Homelander. Elsewhere, let’s not forget a vengeful Butcher will surely be out for blood and his complicated hatred of Homelander will spur the Boys into action in the next run of episodes.

In a twist of fate, comic book Homelander is actually worse than his live-action counterpart. The sexual assault of Starlight by The Deep becomes a big talking point of Season 1 as The Boys does its own take on the #MeToo movement. In the comics, it is a much more controversial affair where Homelander, Black Noir, and A-Train force her to perform sexual favours on them.

If Kripke continues to adapt the comics in a faithful style, there’s a LOT worse to come from Homelander. Personally, I can’t wait to see where The Boys take this Aryan a**hole next!