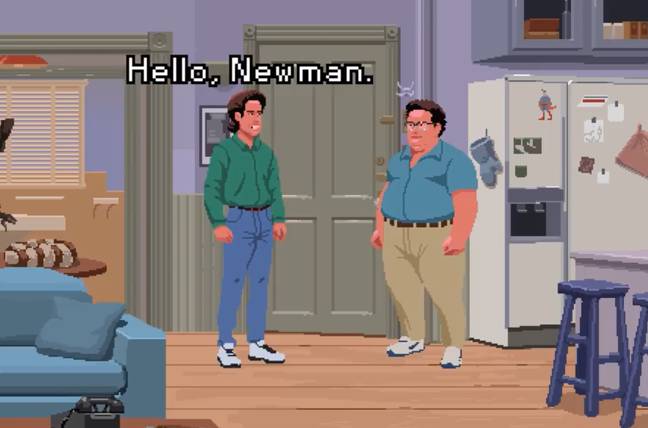 It’s hard to believe that it’s been over two decades since hit comedy show, Seinfeld, went off the air and yet here we are. Though we miss the antics of Jerry Seinfeld and the gang, it looks like their journey is far from over as an unofficial Seinfeld game is currently in development.

The project, entitled “Seinfeld Adventure,” is being made by two game developers in Melbourne, is apparently going to be “the game about nothing,” and heck yeah I’m excited!

According to developers Ivan Dixon and Jacob Janerka, each of the game’s levels lasts around 30 minutes, and features a choose-your-own-adventure style storyline. Playable characters including George, Jerry or Elaine. Sadly, Kramer won’t be playable – as the devs put it – “no-one can control Kramer.”

The synopsis for the game’s first “episode” reads as follows: “Jerry is dating a publicist who accidentally reveals his email address to Kenny Bania through a group email,

“Now, Bania fills Jerry’s inbox with a flurry of spam emails asking for feedback on his new stand-up set. Jerry decides to break up with the publicist over this, but he doesn’t want to deal with the interaction face-to-face.

“Kramer suggests ending the relationship via email and avoiding it all together. Jerry does this before Elaine reminds him that the publicist was supposed to get them all tickets to the opening night of the new movie Rochelle, Rochelle 2.

“George devises a plan to corrupt Jerry’s girlfriend’s computer before she can read her emails so that they can still collect the tickets. Kramer says he knows who can help.

“Someone with a sworn vendetta against email. Someone who has devoted their whole life to analogue mail and sees email as a threat to his livelihood. Someone named Newman.”

Dixon and Janerka’s previous work includes animation for shows like The Simpsons, Rick and Morty, plus Adventure Time. The pair have reportedly approached Seinfeld’s co-creator, Larry David, in the hopes of securing the rights to make their game official.