If there’s one thing the internet loves, it’s a mystery, and the folks over at Bandai-Namco have gotten gamers pretty excited with a teaser site for an upcoming game.

Originally spotted by Gematsu, the creepy AF website (which you can check out for yourself right here) doesn’t give too much away, merely showing a house that gives off definite Ju-On vibes, against a sinister and slowly moving orange sky.

The image, definitely hinting at a horror title, might also be hinting at a found footage-style game, as the picture is clearly meant to be taken with an old-school video camera, showing the word ‘Play’ in the corner of the screen.

There really isn’t too much to go into here – the bottom right-hand side of the screen reads “domas – SCENE01,” with ‘domas’ being the same title as the website title, potentially giving us the name of the game, or at least some sort of clue to it…

A found footage game is giving us all the Resident Evil 7 vibes! 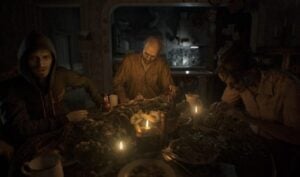 The darkness of the house along with the orange sky definitely gives you the feeling of something being amiss, and the various plant pots scattered in front of the property seem to emphasise as much.

Some clever Redditers delved into the coding behind the mysterious website and translated what was found into two very interesting words: “zombie” and “horror.”

A description was also unveiled, which reads: “A mysterious website appears? This summer, what will happen…”

The site definitely is pushing the idea of us getting some more info before summer’s over, as the website proudly displays the date 30th August 2018.

Not too long to wait then! Maybe it’ll be teaser footage, a trailer or even something a little more exciting…

Although nothing actually happens in the looped footage, it definitely make you feel like you’re about to face the jumpscare of a lifetime, so we’ve got pretty high hopes for whatever this mysterious title might turn out to be.

What do you hope Bandai-Namco has up its sleeve for Domas?