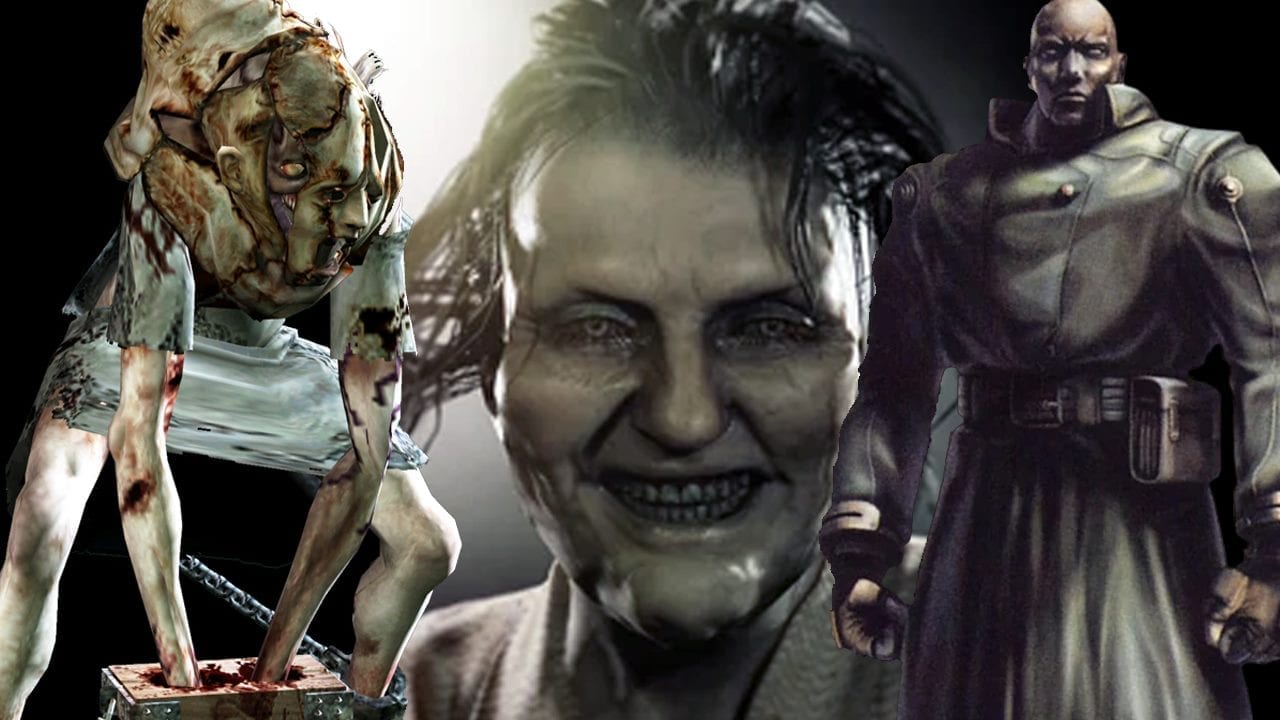 Resident Evil might not be the originator of the survival horror genre, it’s hard to argue that it didn’t levitate this particular brand of video game horror to the moon and back.

The original Resident Evil first released for the PlayStation back in 1996. Despite its cheesy acting and Jill sandwiches, it changed the horror genre for generations to come.

The RE series is packed to the brim with fantastic and ghoulish boss battles, so I’ve decided to write up my favourite encounters across the franchise. Now to be clear, the bosses featured in this article might not be the most challenging or thought-out boss battles, but they are my most memorable encounters. Hopefully they’re some of yours, too!

With that said, here are my top six picks for best boss encounters in the Resident Evil series so far!

Resident Evil 7 takes a different approach than other games in the series, with a first-person camera and more of a “The Hills Have Eyes” vibe. Though a change of pace, many fans (myself included) loved it. While it’s fair to say that generic enemies such as the Molded weren’t all that memorable, the Baker family certainly is.

The core Baker family consists of Lucas Baker, Marguerite Baker, and the matriarch of the family, Jack Baker. (Two additional members, Zoe and Joe Baker, did feature across the game and its DLC).

While Jack’s stalking and taunting antics stole the show, the most memorable boss battle for me was with Marguerite Baker, which takes place during the Greenhouse section of the game.

Marguerite mutates into a horrid elongated creature who’ll make your skin crawl. I won’t go into graphic detail, but Marguerite also had a certain weak point which was pretty grotesque. If you know, you know, and if you haven’t played RE7 yet then you definitely should. The horrific memory of Marguerite Baker will live with you forever, making her one of the best boss battles in the RE series.

Resident Evil 4 is full of many epic moments, enemies and boss battles. To be honest I could have picked from any number of boss encounters in the game, but I’ve decided to go with the very first boss encounter: Del Lago. Translater from Spanish, “Del Lago” simply means “from the Lake,” and from the lake Del Lago most certainly is.

The boss battle itself is definitely one which is signposted. You’re quite literally warned that the villain of the game, Saddler, has awoken the creature to guard the lake, Meanwhile, villagers are throwing bodies into the water, and that’s not to mention that the lake is huge and pretty much screams “incoming boss battle.” Despite all this, the encounter took me by surprise and it’s one that I’ll never forget.

Del Lago is a mutated salamander that has been infected by the parasite Plaga. The amphibian has mutated to the size that it would more than be able to compete with the giant alligator of Resident Evil 2. Sure, Del Lago wasn’t the most challenging boss in the game, but as the old saying goes “first impressions are lasting impressions” and this boss battle certainly holds a place in my memory. Plus, it’s a battle on a boat! What’s not to love?

I’ll never forget the moment I first encountered the T-103 Tyrant a.k.a Mr. X in 1998’s Resident Evil 2. I had finished both campaigns for Leon and Claire, so it was time to tackle the bonus scenario campaigns (which, in my opinion, are the best campaigns of the 1998 original).

Back in 1998 most households (at least in my circle) didn’t have access to the internet, which meant spoilers weren’t really a thing. This meant that, going into the bonus scenarios of Resident Evil 2, I didn’t know what to expect. I certainly did not expect to be stalked by a giant Tyrant in a trenchcoat that would put the T-800 from Terminator to shame.

Granted, Mr. X was scripted, unlike the free-roaming version in the brilliant 2019 Resident Evil 2 remake, but he was terrifying nonetheless. The moment he’d appear with his heavy stomping feet, a soundtrack put you into an instant panic as the fight-or-flight instinct took hold. It created a feeling of dread that I’d never experienced in a video game before. For those reasons, whether it’s the original or remake, Mr. X will go down as one of the best characters and bosses in the whole series.

Lisa Trevor is not a difficult boss battle by any means, in fact, she’s quite basic. But as a character, Lisa Trevor is one of the most memorable and downright scary bosses in the history of Resident Evil.

Trevor was first introduced in the awesome 2002 Resident Evil remake on the Nintendo GameCube. Trevor’s story is one of tragedy, starting from when she was kidnapped at a young age by a research company that would later become the Umbrella Corporation.

Trevor was the first person to be tested with the Progenitor strain, and was the victim of cruel and sinister experiments which would later give her superhuman powers.

When it was realised that Lisa could not be controlled and used as a bio-weapon, the researchers tried to kill her. After failing to do so on numerous occasions, Lisa was left to stalk the Arklay Mountains and the Spencer Mansion.

Your battle with Lisa Trevor is over in an instant as she falls to her death into a deep canyon. She’s then left in the mansion as the facility is destroyed. However, it’s highly likely that Lisa Trevor is still alive, rattling those chains and making the hairs stand up on the necks of those unfortunate to hear her ghoulish groans. As mentioned, hers is a simple boss battle, but it’s definitely a memorable one!

The Nemesis! As I say its name, no doubt you’re already hearing the voice in your head shouting “S.T.A.R.S!”  Unlike Mr. X in the original Resident Evil 2, we knew that the Nemesis was coming for us. After all, the 1999 game was called Resident Evil 3: Nemesis, and this enhanced Tyrant appeared in the cover art for the game. However, knowing of its arrival didn’t make the experience any less intimidating.

The Nemesis is in Raccoon City to wipe out any remaining members of the RPD’s S.T.A.R.S unit, which in this case means returning hero, Jill Valentine.

Whether dropping from above or crashing through the walls, Nemesis gives you a fright like no other, coming long before the “jump scare” became as over-used as it is today. At least on your first playthrough, the Nemesis is difficult to put down. If you succeed, it’s only a temporary victory that gives you just enough time to escape…for now.

When encountering the Nemesis you’ll be prompted with a QTE (quick time event). You’ll be given the choice of trying to escape, or fighting it out. If you flee, you’ll live to fight another day. However, if you stand your ground against the Nemesis, there’s a good chance you’ll die. If you manage to bring down this Big Bad, you’ll be rewarded with in-game goodies.

As the campaign of RE3: Nemesis progresses, this Tyrant evolves to become even more deadly with every mutated phase. Yes, the moments are scripted, but the Nemesis is no less intimidating and will forever be a legend of the Resident Evil series. Whether you love the original or the remake, this is one boss you won’t forget in a hurry!

Alexander Ashford is the father of adopted twins Alfred and Alexia Ashford. Alexander, who worked for Umbrella, is the son of Edward Ashford and helped his father develop the Progenitor virus, which would later help to shape the T-Virus.

Over time the Ashford name would have less meaning. In a desperate attempt to revive his family’s name, Alexander mixed the DNA of deceased family matriarch Veronica Ashford with a deadly gene that could increase intelligence. He hoped that he could resurrect Veronica from the ashes, but it didn’t exactly go to plan.

What Alexander got were two twins: Alfred and Alexia. Alfred wasn’t the brightest spark, whereas Alexia was a superior being, became a child prodigy and the Chief Senior Researcher at Umbrella’s Antarctic Facility at the tender age of 10.

Over time, Alfred became jealous that his father didn’t grant him the same level of intelligence as his twin sister. So Alfred used his own father as a test subject for Alexia’s T-Veronica Virus, which mutated Alexander into a horrific monster. Alfred then became disgusted at what his father had become, deeming him a failed experiment. He locked his father away, chained-up in a chamber for 15 years.

As time passes by, those at the research facility begin to forget the name Alexander Ashford. So does Alexander, who becomes a monster with no memory of his early life. Alexander is soon known as “Nosferatu”, a Romanian word synonymous with the vampire. When Nosferatu is finally released from his chains, he’s a blind creature filled with pent-up rage. Him and his gangly tentacles, of course, try to kill Claire Redfield.

Thankfully Claire survives, but if there’s something that I’d never forget from Resident Evil: Code Veronica, it’s the story and name of Alexander Ashford and the encounter with Nosferatu.

There are lots of fantastic bosses throughout the Residen Evil games, but these are ones which have stuck with me. Hopefully I’ll be adding to the list as more RE games release, but will they ever top these classic battles? Only time will tell!