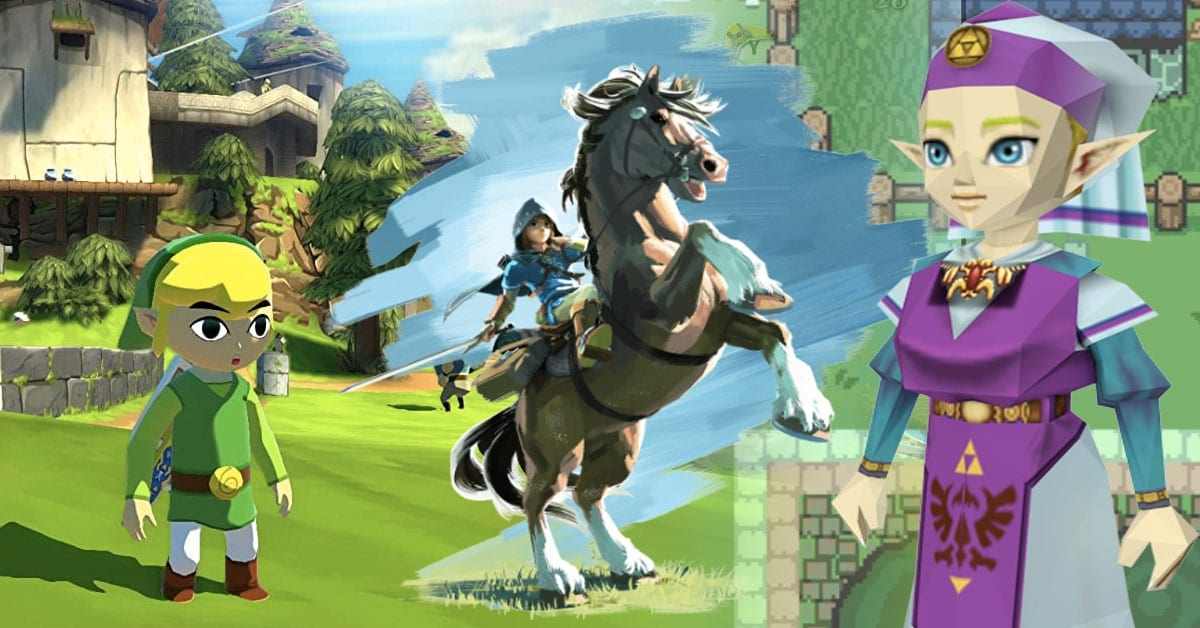 2021 marks the 35th anniversary of The Legend of Zelda, so it feels like the perfect time to share my favourite games of this iconic series.

This beloved Nintendo franchise first arrived way back in 1986 with The Legend of Zelda for the NES. A sequel followed a year later, entitled The Legend of Link.

However, it wasn’t until the release of The Legend of Zelda:  A Link to the Past on the SNES that I truly began to fall for this amazing series. With that little introduction out of the way, here are my personal best Zelda games of all time.

The Legend of Zelda: A Link to the Past (SNES)

Depending on which day you might ask me, I’d say that my favourite Zelda game is either A Link to the Past or Ocarina of Time. Within that, I’m often torn between 1993’s A Link to the Past and its re-imagining, A Link Between Worlds, which released for the 3DS in 2013. Alas, I went with the former to top this list.

A Link to the Past blended ideas and concepts from the 1986 original, but it was wonderfully modernised for the Super Nintendo Entertainment System. The top-down visuals were stunning for their time, giving you the feeling of being able to explore just about anything in its world.

The story of A Link to the Past is the common concept of saving the kingdom of Hyrule from the evil Lord Ganon, but it evolved in ways that would help shape the future of the series. Abilities like the sprint (thanks to the Pegasus Shoes/Boots), having a variety of arrows, and having a spinning sword attack to deal extra damage, all come from this game.

A Link to the Past even introduced series staples like the Heart Containers, the Hookshot and so much more. Many of the features we expect to see in the modern-day Zelda game began with this 1993 SNES classic. To this very day, whether it’s on my SNES Classic, my 3DS, Wii U, or Switch Online, The Legend of Zelda: A Link to the Past is a game that I always return to.

The Legend of Zelda: Ocarina of Time (N64)

The Legend of Zelda: Ocarina of Time is widely considered to not only be the best Zelda game of all time but also to be one of the greatest video games of all time, period.

Ocarina of Time was a huge game for its generation in terms of scale and, to be fair, it still is to this very day. Ocarina of Time first graced us with its presence in 1998 on the Nintendo 64, and was the first open-world-esque Zelda game realised in full 3D.

From Hyrule Field, Kokiri Forest, the Lost Woods, Hyrule Castle, Kakariko Village, Zora’s Domain and Death Mountain, to the very first time you meet Epona at Lon Lon Ranch, I could go on forever listing all the amazing and memorable locations of Ocarina of Time. And that’s not even mentioning the gameplay, the story or the incredible music.

Being set in a 3D world, exploration felt like no other game I’d ever played back in the 90s. As you venture into dungeons, searching for secrets and having epic boss battles, it was truly an inspiring world. Link can also time travel and transform from a child to an adult, which was pretty mind-blowing in its day.

There are too many awesome moments I could talk about from Ocarina of Time. If you’ve never played this game, you’re seriously missing out on a true piece of gaming history. Thankfully you can pick up the remaster on the 3DS, and you can buy Ocarina of Time digitally from the Wii U’s eShop. Hopefully one day Nintendo will give us that full Switch remake that so many of us crave!

When The Legend of Zelda: Wind Waker released for the Nintendo GameCube in 2003, I remember it not being all that well-received. Before the game even released, some fans were turning it down due to its cel-shaded visuals and bright colours, which marked a dramatic change in the series’ style.

In the Wind Waker, Ganon kidnaps Link’s sister from their home island out in the sea. Link’s journey to save her also leads him to stop Ganon from getting his evil clutches on the Triforce. He also gets to meet an incarnation of Princess Zelda as Tetra.

Sure Wind Waker wasn’t the best game in the series, but it instantly won a place in my heart as it experimented with several new ideas. I love how it allows you to sail the open seas with your talking boat named King of the Red Lions, giving you an extra sense of adventure.

To this day I still return to 2013’s Wind Waker HD on the Wii U. Ironically, the controversial cel-shaded visuals have enabled this game to still look great today (though the Wii U version is an HD port). If, for whatever reason, the Wind Waker is a game you’ve missed, I couldn’t recommend it enough.

Link is living the quiet life on a ranch in Ordon Village until a child is taken from the town. In an attempt to save the child, Link is led to a twilight-shrouded forest where he encounters the Shadow Beast.

Link then discovers that he has the ability to transform into the beast (a wolf), offering unique powers that cannot be obtained in his normal form. Before long, Link is introduced to Princess Zelda and embarks once more on a quest to save Hyrule.

While essentially the same game, Twilight Princess’ GameCube and Wii versions have some subtle differences. For example, the Wii version makes use of the console’s motion controls, as well as utilising the built-in speaker on the Wii Remote.

The Legend of Zelda: Twilight Princess is yet another special game in the series, and if you don’t own the Wii or the very rare GameCube version, you can still buy the 2016 HD version via the Wii U’s eShop.

The Legend of Zelda: Breath of the Wild (Wii U/Nintendo Switch)

Just like Twilight Princess, Breath of the Wild is a game that launched on two platforms: the Wii U, and as the main launch title for the Nintendo Switch. Having played both versions, each is fantastic (though the Wii U version sometimes struggles to keep up with the framerate).

Taking inspiration from the original The Legend of Zelda on the NES, Link awakens from a long sleep (100 years to be exact) to once again save the kingdom of Hyrule. Players are given little introduction to what is going on. The game throws the player into its huge open-world to explore and discover as they please. While the possibilities are limitless, if you wander into an area that you’re seriously underpowered for, you’ll soon know it.

Breath of the Wild was created with the Chemistry Engine, and features true HD visuals. Plus, it finally has some actual voice acting to tell its tale of mystery!

The game’s memorable Divine Beasts are some of my favourite dungeons and boss battles in the series, taking genuine combat, strategy and puzzle-solving skills to beat. The Divine Beasts are also huge, and when you first see them, you can’t help but stop in awe.

However, for all of what Breath of the Wild gets right, certain aspects haven’t pleased everyone. The game doesn’t feature dungeons in the traditional sense, instead opting for Trials and the Divine Beasts. Don’t get me wrong, I enjoyed the Trials (which were essentially big puzzle rooms), but hopefully we’ll see more traditional dungeons in the sequel.

Perishable weapons are also a big issue for many. Some might like this feature, but I hate it. It annoyed me when I found or acquired an awesome sword, as I knew at some point if used too often, it would break. It got to the stage that I stopped using epic swords and I was instead beating down Bokoblins with sticks! Hopefully, Breath of the Wild 2 won’t feature perishable weapons.