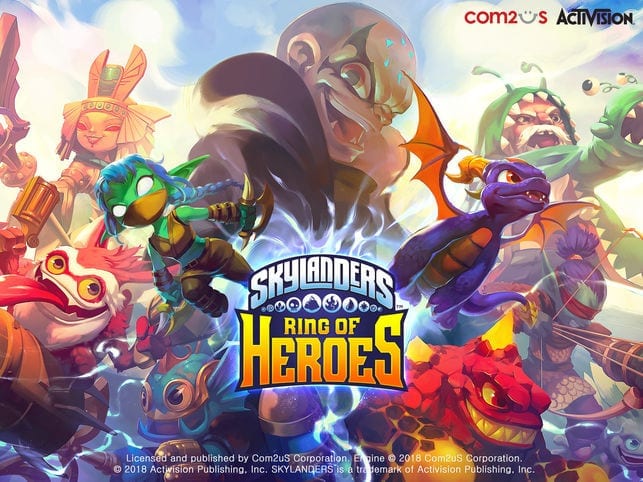 The Skylanders franchise is one heck of a series, and it’s just been given the mobile treatment thanks to an exciting partnership between Com2uS and Activision.

The mobile RPG, Skylanders Ring of Heroes, has already received critical acclaim, and since it’s come from the team behind the hugely-successful Summoners War, it’s not too much of a shock.

GameByte had the opportunity to speak to Casey Lee, CEO of GAMEVIL Com2uS USA Inc., about bringing such a beloved franchise to the very-small screen.

First of all, I wanted to know how the team rose to the challenge of such a huge collaboration with Activision and the expectations that come with an IP as popular as Skylanders.

“The reason why we wanted to work with the Skylanders IP – other than the fact that they are a globally established brand through games, toys and animation – was that we felt that Skylanders did not have a big reach in the Asian market,” said Lee.

“Also, with the successes we found in Summoners War with turn-based strategy RPG games, we felt that Skylanders was a perfect IP to work with, in terms of creating an easier-to-pick-up version of Summoners War. Something that people can have fun with and interact with at a much more casual level.”

Having played quite a bit of the very addictive Skylanders Ring of Heroes, I wanted to know if using existing characters like the very recognisable Skylanders crew made developing the game easier or harder? Lee said that it was a bit of both.

“I think if you talk with the developers, when working with an established IP, there are lots of approval processes. You are working with an IP that is already established in the market. So it’s hard to be creative, especially with a designer’s perspective.

“When they are asked to create their own style of art, they can go all out and do whatever they want and their creative juices will flow. However, when you are working with an established IP,  you are not able to do that. But at the same time, it definitely helps. When you are working with an IP that is as popular as Skylanders, you know it is going to work in the market. You know that there are players that love the artwork style and these characters. It reduces some of the stress that goes into creating something completely new, hoping that it will do well in the market. So I think it is little bit of both. It is just how you look at it.”

As for whether or not Ring of Heroes would be getting the toys-to-life capabilities that Skylanders fans adore, Lee didn’t rule anything out.

“I think for now, we do not have any plans to do this, because we wanted to focus on the mobile game first. That being said, anything is possible,” he admitted. “Like you said, their rise to fame has lot to do with toys-to-life mechanics and we know that that is a big strength of the Skylanders IP. But at the same time, we don’t want to rush into something like this, only to find out later that it is not a great fit for this type of mobile game.”

If you’re already a veteran Summoners War player then will there be anything for you in Ring of Heroes? Absolutely, says Lee.

“Even from the beginning, there are several differences. The battles utilise a given amount of energy (mana) to have an optimised outcome. Whereas, Summoners War is more about turns and in what order you use your skills. Speed tuning matters a lot. But in Skylanders, it’s about how you work with each character’s skills and how you utilise and optimise the given energy to its best potential.

“I think the fundamental strategy is very different between the two games. For me as a Summoners War fan with over four years of experience, even I feel like Skylanders is incredibly fresh and it’s a completely different style of gameplay. I still have fun when I play both games.”

When it comes to combat in the game, there’s a lot to play around within Ring of Heroes. If you’re really into hardcore turn-based RPGs or strategy games, then you absolutely shouldn’t be put off by the bright colours and child-friendly characters of Skylanders. When it comes to the gameplay itself, you might be surprised at the difficulty level and the amount of strategy you’ll need to apply to battle successfully.

In Ring of Heroes there’s a lot of room for the player to battle how they want to without being forced to use certain characters or abilities in a certain order. I wanted to know: is this going to make the game harder for new or younger players?

“I think the game is certainly easier at the beginning. Here you can randomly pick any skills that match the amount of energy you have left and even if you don’t strategise a great deal, you can get through many of the early battles,” Lee explains.

“However to master Skylanders Ring of Heroes, I feel that it is actually more difficult than Summoners War in the sense that you are provided more flexibility. You can use one particular Skylander to unleash all of its skills over and over again instead of utilising the whole team. There are many different options that you have as a player. So it really depends on where you’re at in the game.”

Mobile games are used to getting quite a bit of bad press, despite millions upon millions of people choosing to take their games on the go with either iOS or Android. At such an interesting turning point for the mobile games industry, how does a partnership with a gaming giant like Activision help?

“One of the reasons that we even approached IPs that are typically on console or PC, is because we feel that as a mobile game company, it is our job to re-interpret these IPs on to a different platform,” explains Lee. “Yes, there is a stigma but at the same time, as a mobile game company, we have the freedom to create games that you have never seen before on console or PC and I think it is good thing for us. It is definitely one of the benefits of working in mobile games.

“Specifically for Skylanders ROH, this is a game that you have never seen before in the Skylanders franchise. And I think the reason why we were able to accomplish that is because we don’t have to fit into a certain type of mould. For mobile, we can make any type of game we want, as long as it’s fun.”

As fun as the Skylanders Ring of Heroes may have been to make, it’s almost definitely more fun to play! If you love Skylanders, strategy games, or even if you just need something new to play on your commute to work, this is definitely worth your time.

Com2uS’ Summoners War is about to celebrate 100 million mobile downloads, and Lee “certainly hopes to achieve those types of numbers with Skylanders Ring of Heroes.”

A huge thanks to Casey Lee for talking to us!

Skylanders Ring of Heroes is available to download right on iOS and Android.