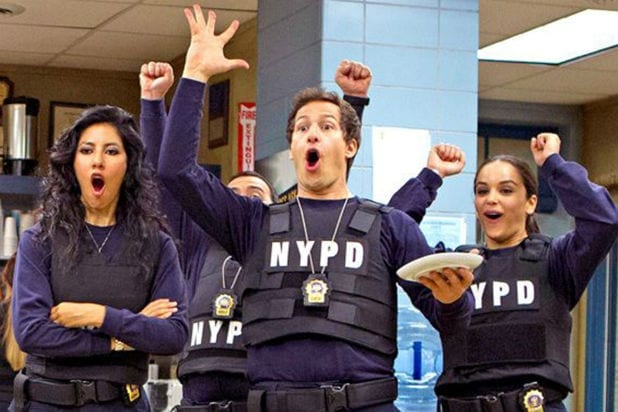 The time is nearly nigh!

The cast of Brooklyn Nine-Nine have revealed that they’re filming season seven of the much-loved police comedy.

Melissa Fumero, the actress who plays Amy Santiago on the show, revealed they were filming by uploading a picture of Terry Crews, Andy Samberg and Stephanie Beatriz walking towards a door with their police jackets on.

Earlier this year, news broke that the show was getting a seventh season.

This was pretty unexpected, as Fox had cancelled the show after the fifth season due to falling figures, and NBC saved it, promising to do one more to ‘wrap things up’ for the fans.

This comes after the dog behind Cheddar, Captain Holt’s faithful best friend, sadly passed away a couple of weeks ago.

The corgi (real name Stewart) was put to sleep following a short illness. His owners posted a heartfelt Instagram post sharing the news. Although it’s sad, Stewart got to spend his last hours doing what he loved best.

Stewart’s owners told his followers that he enjoyed a stroll on the beach, followed by a picnic of In & Out burgers in the sunshine. Stewart is survived by his sister Stella.

The caption read: “We went to the beach (his favorite place) where he frolicked in the surf and then enjoyed a picnic lunch of In & Out burgers. We relaxed in the sun and just enjoyed each other’s company.

“Our veterinarian met us there later and Stewart went to sleep peacefully in my arms while listening to the sounds of the ocean. He was a one in a million kind of dog, he was my supaah staah.”

Let’s remember how Cheddar has come to the Nine-Nine’s aid on numerous occasions. As well as being “no common b***h,” helped with the Halloween belt heist, and carried the rings at Jake and Amy’s wedding.

Although Stewart isn’t the only dog to play Cheddar *gasp*, he’s the pooch that played him for the longest. It’s unclear what happens to Cheddar now, but I’m guessing they won’t be writing Hoult’s furry friend out of the series.