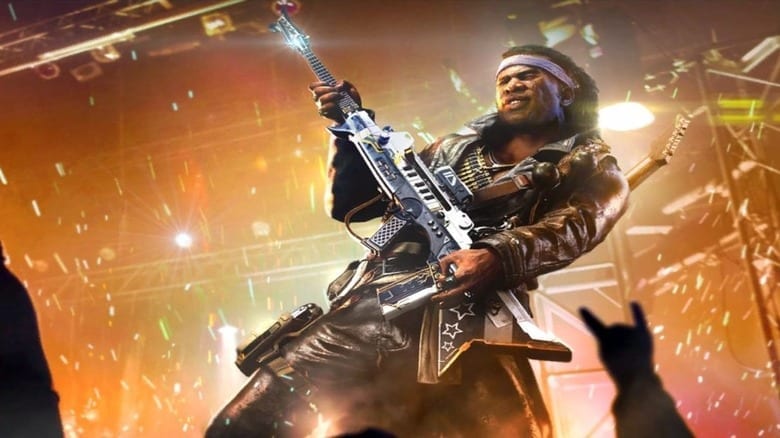 Look, war games can be a bit bleak at times. However, the new ‘80s themed bundle for Call of Duty: Warzone has an assault rifle that’s also a keyboard. Talk about literal instruments of death!

Dubbed the “Shredder assault rifle”, the new firearm is an ultra-class weapon that can be played like a keytar. If you’re familiar with ‘80s ensembles, then you’ll likely have saw bands like New Order armed with a keytar.

Also, if you’re savvy with military weaponry, then you’ll probably think the Shredder looks vaguely like a FAMAS.

If you’re a fan of ‘80s pop culture, then you probably should be excited for Warzone’s new bundle.

Both Rambo and Die Hard’s John McClane are coming to the Battle Royale, alongside various other themed skins.

Of course, Warzone’s decade switch-up is largely thanks to a recent in-game event. To summarise, the event basically ended with the destruction of Verdansk, which serves as Warzone’s main map. As a result, the game now features a 1980s version of the map, which sets the stage for Warzone Season 3.

Who knows, perhaps Warzone’s new bundle is just the beginning. Personally, I’d love to see more action heroes like Arnold Schwarzenegger and Kurt Russell come to the fold. If there’s one thing that’s certain, it’s that Warzone’s probably going to be ‘80s themed for the foreseeable future.

Call of Duty’s 80s Action Heroes bundle is coming to Warzone on 20th May 2021. The music Legend Mastercraft Bundle is also available for 2,400 Call of Duty Points.