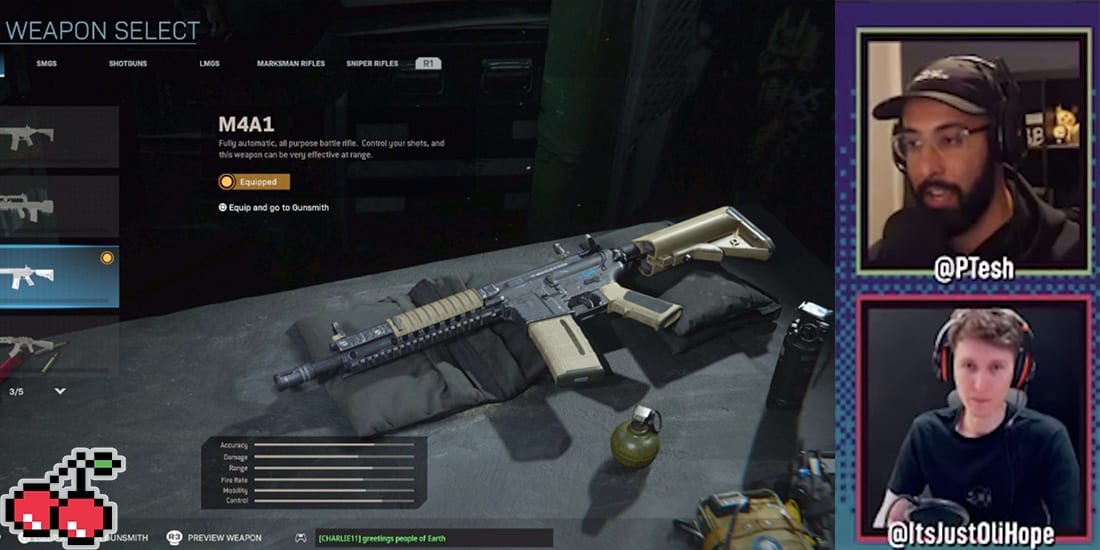 Whether you’re new to Call of Duty: Warzone or if you’re just looking to up your game, there’s always room for improvement – especially when it comes to your loadout. If you have questions about the best set up for your Warzone matches, then YouTuber PTesh has the answers!

PTesh joined GameByte’s own Oli Hope to share his tips and tricks for the ideal loadout, so without further ado, here’s everything you need to know, straight from the man himself!

Check out just a snippet of our time with PTesh in the video below, and don’t forget to check out the man himself over on YouTube right here.

The Benefit of Attachments

“I use a Monolithic Suppressor to make sure that when I’m firing, people don’t really hear me. You need a lot of ammo as well, so a 60 Round Mag, and I use a Tempus 26.4 Archangel with a barrel too, and the rear grip is the XRK,” explains PTesh to our noob, Oli.

“I also chuck on this VLK 3.0x Optic. You can shoot very far but you can also [shoot] if people are up close, you’re not too zoomed in or anything. That works really well for me, I’d definitely recommend it. You can play around with it as well, as long as you have the barrel, the ammo and rear grip you’re pretty good.

“The barrel is good for a lot more range and bullet velocity, and a lot more recoil control. The only bad thing about that is you’re a bit slower and then your Aim Down Sight speed is a bit slower as well. That’s stuff you can get used to. The rear grip is good as well […] it gives you a little more sprint firing speed so when you’re sprinting and you need to pop your gun up real quick, you can get that done as well.”

Not everyone loves the game’s thermal scopes – in fact, love for them is pretty hard to come by. However, if you’re a thermal fan, don’t be disheartened by the negative press.

“It’s personal preference, I don’t really like the thermals, there’s a lot of negative opinions about people running thermals!” laugh PTesh. “A lot of people say really mean things to you so it’s a bit of a pride thing for me. But like I mentioned before, it’s really good for like the 3X, it’s very, very good for the long range, being able to shoot really far but also when people get really close.”

“I have two different classes for this one,” explains PTesh. “I have the RPG on it, for when people are in cars or vehicles or whatever, it’s really easy to gun them down. But if I was to run [the early game perk] Overkill and have a second, I’d go with a sniper. I really like the KAR98K, but I know some of my mates run the HDR and the X50.”

Even the best are always learning in Warzone, so don’t get complacent with your loadout – you never know when something better might come along.

“Those are my main two for Warzone really,” says PTesh. “Sometimes you’re running along and you pick up a gun from an enemy and it’s really good so there’s a lot of experimenting with that that I need to do.”

“If you want to run the two gun combo you definitely need Overkill, but if not, you have to put on [the perk] Ghost,” says PTesh. “Both my classes I’m running a Heartbeat Sensor, it’s so easy to catch people out without it. Some people don’t run with it for some reason, so it’s very very important to run Ghost. It hides you from UAV, Radar Drones and Heartbeat Sensors, which everyone else runs as well. People popping UAVs all the time, you’ve got to have it on.”

The Amped perk is easy to overlook but it can make a huge difference to your kill count. As PTesh puts it: “[I have it] for faster weapon swap and rocket launcher reload speed, so me running the rocket launcher on this class, it just helps to reload it quicker and all that. You use it a bit quicker, you burst out a bunch of damage, and get people as fast as you can.”

He tells us: “In multiplayer for example, I hate flashes and stuns and all that, so I run Battle Hardened on a lot of my classes,” says PTesh. “It just depends on what’s getting to me at that moment in time, for the most part, it’s mostly really that faster weapon swap. It’s very very handy when things get really heated. [With] Warzone sometimes you’re playing, you’re just walking along, and all of a sudden bang, bang, bang, and you have to switch and switch on, and get into that fight. I think having Amped on really really helps.”

“I really like running with frag grenades, because you can cook them, so if you’re good at throwing and lobbing them you can kind of catch people off guard by cooking them and then letting it land next to them. It just depends because a lot of the time you don’t really get your loadouts. You might pick up a molotov or whatever, those are pretty handy, I’ve found it pretty handy as well.

“I wouldn’t really want to run a throwing knife or a flaming one, because chances are you’re not going to hit them. If you’re a bit on the trolling side, I guess a proximity mine would be cool to put next to vehicles and stuff like that. I saw a clip earlier today of someone putting a proximity mine under the helicopter and they tried to get to it without blowing it up, but it always blows up.”

Check out just a snipper of our time with PTesh in the video below, and don’t forget to check out the man himself over on YouTube right here.