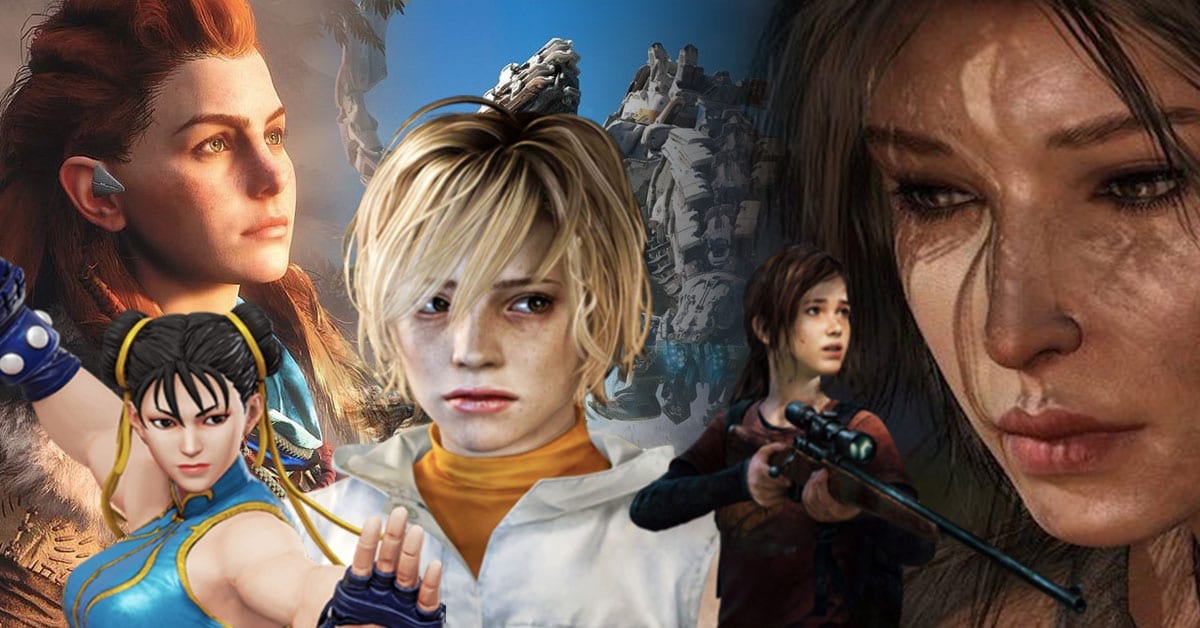 Behind every great man is a great woman, and in gaming, many great women characters have stolen the show from your typical male heroes. More and more women characters are leading the way and becoming some of the most iconic heroes in video games.

Now, there’s a lot of women characters who I’d love to include on this list. I’ve been racking my brain all week trying not to overdo it. If I had got carried away, this would be a very long list indeed!

However I’ve tried my best to keep it short, and I’ve picked my personal favourite women protagonists of all time (though as already noted there are a few omissions). That being said, here’s my personal list of favourite kick-ass women in video games.

Chun-Li first appeared all the way back in 1991 with the arcade version of Street Fighter 2, which means that this Chinese fighting machine and officer of the law is a true OG of the gaming world.

Despite Chun-Li being around for a whopping 30 years, it was perhaps only with 2016’s Street Fighter 5 that we really got to know this iconic and beloved character of the video gaming world (as this was when the series introduced proper cinematic cutscenes and a story mode). Despite being in our lives for three decades, it only seems to be recently that we’ve really gotten to know Chun-Li. Definitely one of the women heroes of video games, I hope that we’ll get to know her even more whenever Street Fighter 6 finally arrives.

Lara Croft, we couldn’t make a list about the top female protagonists without the queen of tomb raiding now could we?

Over the years Lara’s back-story and image has changed a lot to the extent that it’s quite difficult to keep up with it all. However what we do know for sure is that Ms. Croft has been with us since 1996, and if there’s one aspect that has remained consistent since then, it’s that she’s a true badass.

Yes she may have changed even more so since 2013, but this is the Lara Croft I prefer. She’s more grounded, genuine, vulnerable and above all else when her chips appear to be down, she’ll always come out fighting until her last breath.

When Horizon Zero Dawn released in 2017 for the PS4 it quickly became one of my favourite games of the generation. For me, the strongest aspect of Horizon Zero Dawn was its lead character, simply known as Aloy.

During the opening moments when we were first introduced to a young Aloy, she always seemed out of place, destined for more and she knew it. When Aloy broke from her shackles to forge her own destiny and save her homeland, she embarked on a quest that she could never have imagined. Truly inspirational and pretty talented with a bow, Aloy is a real hero.

Ellie and Abby (The Last of Us Part 2)

Depending on your perspective, both Ellie and Abby can be seen as protagonists, but on the flipside they could also be seen as antagonists. Regardless of what you think of each character’s motives, both can be seen from either side of the same coin.

In the original game, young Ellie’s inner strength, bravery and wit cemented her as one of my most memorable and loved characters of any video game, ever. While some of her motives in the sequel are questionable, she believes she is fighting for justice for someone she loves.

Abby, on the other hand, starts out as an antagonist but as the story of The Last of Us Part 2 unfolds, her motives become clear and we began to know the real her. At the end of the day, just like Ellie, Abby is fighting for those that she loves, and wouldn’t think twice about taking a bullet for those close to her.

If Ellie and Abby would have switched roles in the two games, I believe both would have still responded in the same way. As The Last of Us 2 came to its conclusion I was yelling at the TV “why can’t you both just get along?!”

Whether you love them or hate them, both Ellie and Abby are heroes (and perhaps villains) of their own personal stories. Their complex backgrounds and emotional journeys make them two of the most three-dimensional women we’ve ever seen in a video game.

Heather Mason has quite literally lived through it all in the world of Silent Hill. I don’t want to say too much about Heather just in case you’ve never played Silent Hill 3, but if there was ever a character that represented the normal everyday person thrown into an extraordinary situation, it’s Heather.

Lacking combat skills and with little understanding of what is happening to her, Heather turns out to be far stronger than she could ever have imagined. In a cruel twist of fate, she learns of her family’s dark past, but comes out swingin’. Heather adapts, kicks ass and survives in situations that most would die in. She’s also pretty funny.

Heather is everything that you’d ever want to see in an unlikely hero.

We first met Jill when she was introduced as the “Master of Unlocking”, though she was also referred to as a “Jill Sandwich”. Jill is a key member of the S.T.A.R.S special task force, and when she was stranded in the Arklay Mountains with the fellow S.T.A.R.S members, she embarked on a story that led down a rabbit hole of cruelty, corruption and horrible mutations.

Jill soon makes it her mission to bring down the pharmaceutical company known as Umbrella who is behind the infamous zombie outbreak. Jill would later appear in other Resident Evil instalments, most recently the RE3 remake.

Over the years Jill has evolved from a cheesy and bland character in the 1996 original Resident Evil, to a badass survivor that will stop at nothing to fight the good fight. Jill is a hero in every sense of the word.

While there’s countless (literally countless) other kick-ass women in video games who we’d love to mention, it’s these seven who’ve officially earned a spot on this list. Have we missed off your favourite? Let us know your favourite women characters across our social media channels!