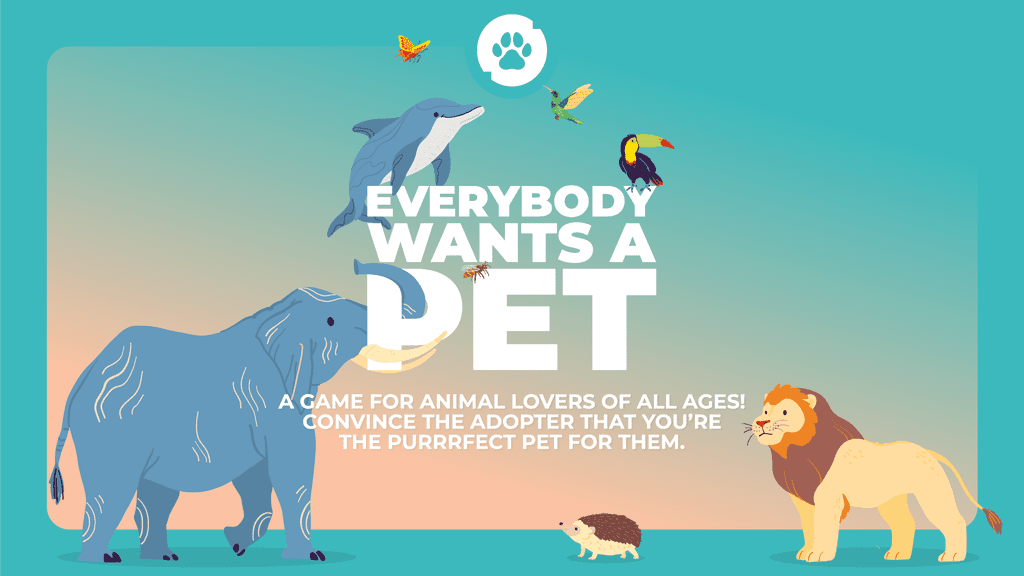 ‘Everybody Wants A Pet’ is an adorable looking card game launching on Kickstarter. The goal? Get your mates to adopt you as animals!

Think Funemployed meets a trip to the zoo. That’s ‘Everybody Wants A Pet’! It mixes a traditional card game rule set with a sprinkle of improvisation. You can play with up to three of your friends. Want to know more? Here’s a trailer to get you hyped.

How to play Everybody Wants A Pet

Firstly, one player picks up an ‘Adopter’ card. This will inform the player of what sort of person they are. One example given on the Kickstarter is a Vegas performer. The player can then get imaginative with explaining who their character is and what their personality is like.

In the second stage, all the other players must pick up an ‘Animal’ card. This will tell each player the type of animal that they have been assigned. Players must then also pick up five ‘Quality’ cards. On each of these cards will be either a good or bad trait.

Once all of the cards have been picked up, the improvisation can truly begin. Players must use three of their Quality cards along with their Animal card to convince the Adopter why they should choose to adopt their animal.

It’s up to players to think on their feet and pitch why their Animal will best match the Adopter’s personality traits. Once every player has said what they need to, the Adopter must choose one Animal to adopt. The winner of each round then becomes the Adopter for the next round until one person has been adopted three times.

What are the stretch goals?

Everybody Wants A Pet is being developed by Twin Stag Games, a tabletop game developer based in Manchester. The team is looking to raise £5,000 on its Kickstarter page. It’s already one third of the way there, with three weeks left to go.

There are several reward tiers for those who would like to support the game. You’ll need to spend at least £15 to receive a copy of the base game. Lower rewards are available, for which you’ll receive a unique card with a custom animal design.

If you’d like to go all out, there’s the £20 combo pack. That will earns you the base game as well as the unique animal card. A lofty £1,000 pledge will earn you everything that the company ever makes in the future – that’s every new game it decides to make, as well as any expansion packs for Everybody Wants A Pet.

If you’d like to become a backer of the project, you can do so over on the Kickstarter page.

Disclosure: The creators of Twin Stag Games are colleagues of ours here at Social Chain. Whilst we do genuinely love this game, we wanted to be clear that no money was exchanged for this feature and the company takes no profit from the creation of Everybody Wants A Pet.