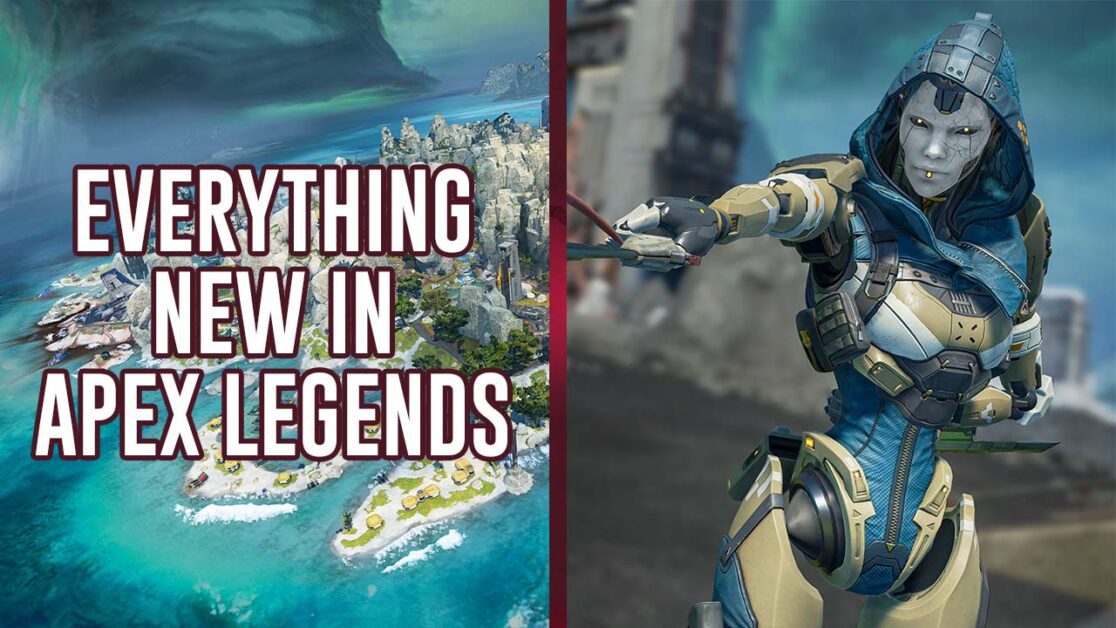 A whole new map, Legend, and weapon are all arriving in the biggest update for Apex Legends yet, titled ‘Escape’.

Respawn Entertainment has been quite the busy bunch over the last few months as it prepares Apex Legends for a huge content drop. This new season is technically the 11th since the game launched back in 2019. It brings with it an entirely new map that’s designed from the ground up to evolve as time goes on. In addition, there’s a new Legend wearing a familiar face from Titanfall 2. All of that, plus a new weapon, new battle pass, and all new game mechanics.

Here’s everything you need to know about Apex Legends – Escape.

The fourth new Apex Arena, Storm Point is the largest map to arrive in Apex Legends yet. Clocking in at 15% larger than World’s Edge, it’s also one of the most diverse that we’ve seen. It’s a tropical location that takes place on the planet of Gaia. In the lore, this was once an IMC colony dedicated to harvesting energy.

Part of what makes Storm Point so diverse is the focus on verticality. The north of the map consists of a huge mountain range that can either be explored over or underground. A series of tunnels and lengthy ziplines allow for players to traverse in any way they like. Then there’s the jungle areas that lead down to the beaches at sea level. Storm Point is so vertical that its highest point is further up than the dropship in some of the other maps. It’s very impressive!

Elsewhere on the map there are other new ways to traverse. Several gravity canons are placed strategically that allow players to cover massive distances quickly. These replace the launch balloons from other maps, but they’re far more fun to use. While in the air, you have some control over how you move, and you’re free to use your weapons and abilities as normal. The cannon makes an almighty boom noise when you step on it, though – it certainly can’t be used stealthily.

Another new feature on the map is added wildlife. Apex Legends maps have always been semi-populated with animals, but they play a larger gameplay role on Storm Point. Around the map, you’ll encounter Prowler and Spider nests. Prowlers will attack on sight, wheras Spiders will only spawn if you shoot their eggs. Killing these animals will earn you loot and bonuses to your EVO shield.

Fans of Titanfall 2 will remember Ash from the excellent campaign of Respawn’s previous adventure. She was one of the early boss battles and piloted the Ronin Titan type. She returns here as a robot recreation of Dr. Ashleigh Reid. She has a history with the character Horizon, which is explored further in the Ash story trailer.

Her abilities make her one of the more aggressive focused characters on the roster. She’s intended to be a legend that makes for big pushes with her squad following behind her. We’ve written up a full guide to Ash’s abilities over on FragHero, but here’s a brief breakdown of what she’s capable of:

It’ll be interesting to see how Ash fits into the current Legend meta. I found her play-style to be tricky while playing solo, but I can imagine that she’s incredibly useful for opening team fights when coordinated properly with a group.

Another friendly face (or unfriendly if you’re on the receiving end) from the Titanfall universe, the C.A.R. SMG returns in Apex Legends. Slotting in as another close quarters weapon, this SMG packs a serious punch and has one or two unique tradeoffs.

Firstly in its favour, the C.A.R. is capable of firing two types of ammunition. Both Light and Heavy rounds can be slotted into this puppy, meaning you’re far less likely to run out of ammunition quickly. It’s fully automatic, so you know that you’ll be going through plenty of rounds in a match.

You’ll want to watch where you’re firing them, though. The C.A.R. features a hefty amount of recoil, so it’s not something to be used at long range or sprayed in a panic. Keep it under control, though, and it’ll be a deadly piece of equipment in the right hands.

As with every new season update, Escape comes with an all new battle pass with cosmetic items for dedicated players to enjoy. Reaching rank 100 this time around will earn players the coveted Pipe Dream and Fatal Attraction reactive skins for the Prowler weapon.

In a new approach for Ranked, this season is going to be split in two. Players will be able to enjoy Storm Point between November 2nd and December 21st. Just before Christmas, the competitive map will then swap over to Worlds Edge until February 8th.

That’s an incredible amount of new content to arrive in Apex Legends, and it’s just the beginning for the team at Respawn. It describes how the Storm Point map has been designed to evolve from the ground up as time goes on. Where other maps have been destroyed as they evolve, Storm Point will instead be built up into something even grander down the line. I’m sure the community will be looking forward to seeing how it all shakes out.

Apex Legends Escape launches on November 2nd with the season running until February 8th 2022. What are your thoughts on the latest Apex Legends season? Let us know across our social channels.