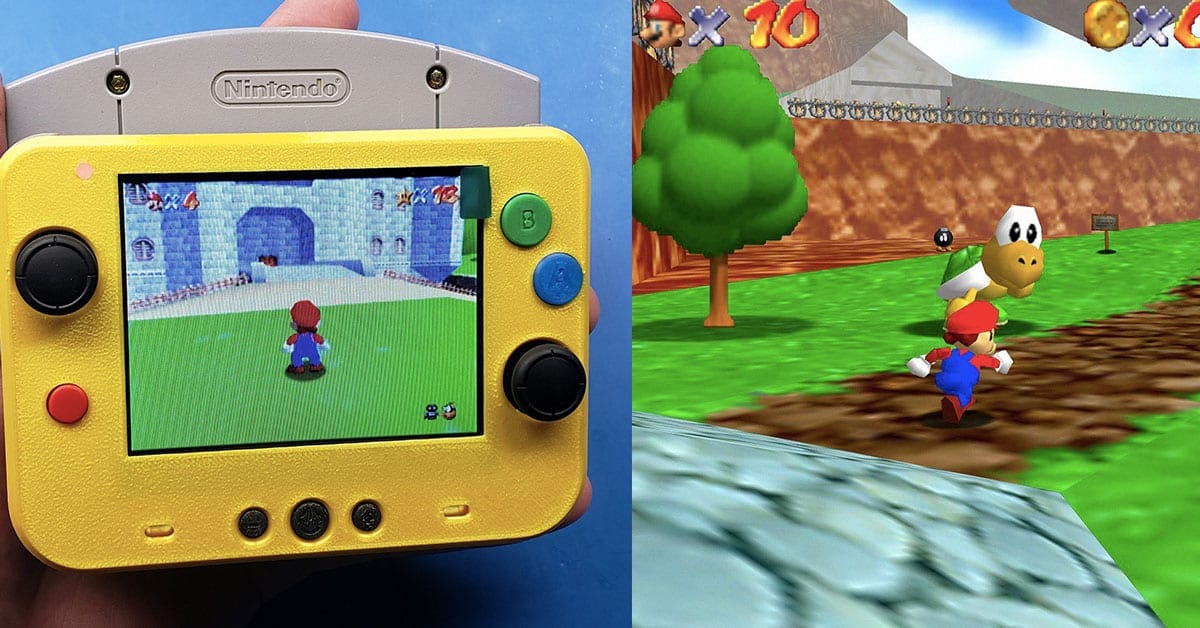 We may not be getting an official Nintendo 64 mini console anytime soon, but one gamer has taken the creation of the beloved console into their own hands, quite literally, and has created a tiny Nintendo 64 which really works!

The gamer who goes by the Twitter handle GmanModz of BitBuilt has built their very own Nintendo 64 handheld console, which runs games from cartridges and not emulation software.

“I have finally fulfilled my destiny of building the world’s smallest N64 portable,” said GmanModz in a tweet revealing the awesome portable console.

In the image revealing the custom-made N64 portable the classic platformer Super Mario 64 can be seen running on the tiny system.

The shell of the portable console looks to be no wider than an N64 cartridge and is based upon the bottom half of a 3DS XL handheld.

The analogue sticks are taken from the Nintendo Switch’s Joy-Con controllers and the B (Green) & A (Blue) buttons are influenced by the N64 controller.

In a follow-up tweet, GmanModz also shared an image of inside the shell of the custom-made N64, revealing that they used the real motherboard from the console.

“In the spirit I used a real N64 motherboard, not my smaller redesigned PCB,” revealed the talented console modder.

Recognising talent, the gaming community appreciated the handiwork of GmanModz.

“That’s one piece of engineering!” said one gamer.

“What is this sorcery” said one gamer using a Jon Snow gif from Game of Thrones.

For those that are worried that Nintendo might issue GmanModz a Cease & Desist then fear not because as long as these custom made tiny Nintendo 64 handhelds are not sold (at least publicly), there should be no issue.

So what about an actual N64 mini? Back in 2018 Nintendo patented the N64 mini and images reportedly leaked, suggesting we might see one eventually!

It’s unlikely that we’ll get an official N64 mini in the immediate future, but let us know what games you’d like to see featured on the system when it inevitably arrives.