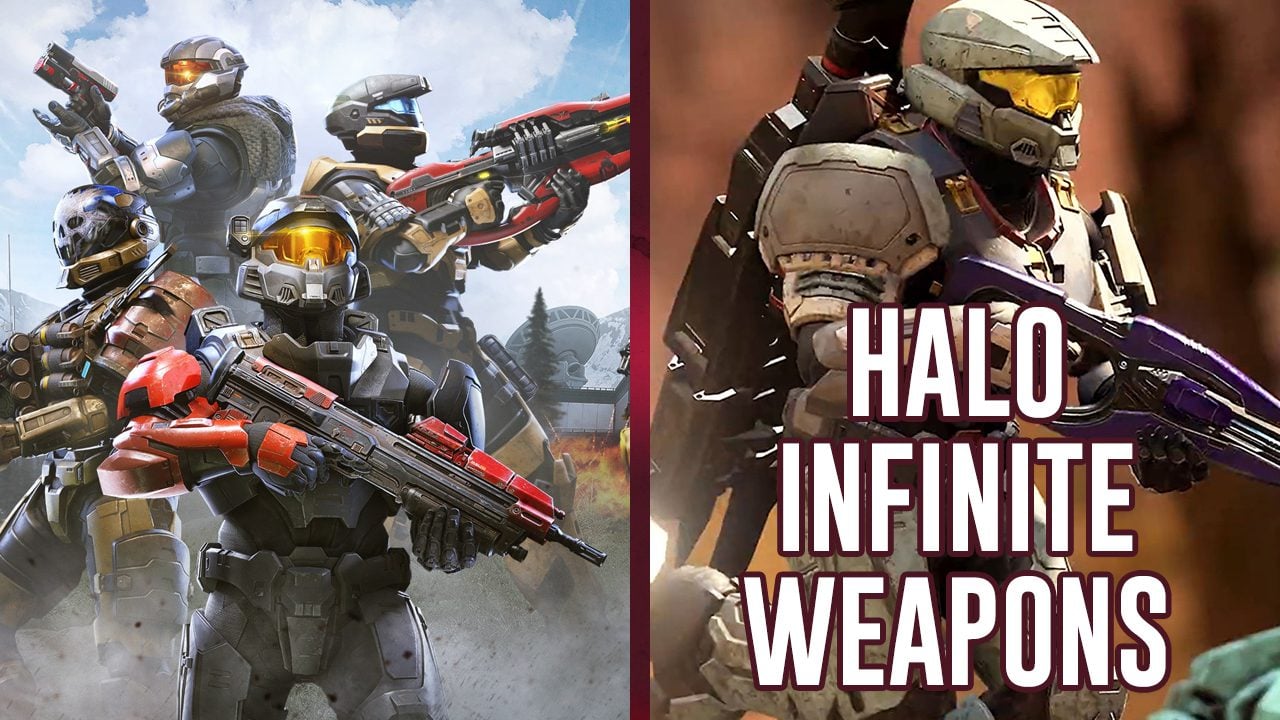 Halo Infinite multiplayer can be confusing to those who didn’t grow up with the games. New players checking the game out now that it’s free to play might be coming from Call of Duty, Counter-Strike, Valorant, Overwatch, or any other popular shooter. There are things Halo just does differently from other shooters, and weaponry is certainly one of those things. Here, we are going to break down the weapons of Halo Infinite, explain what they do and when they should be used. If you’re brand new to the game, or even a returning player looking to brush up on their game knowledge, we have made our Halo Infinite weapons guide for you.

Each weapon falls under one of the four damage types in Halo Infinite. Those are kinetic, plasma, hard-light and shock. Each has its own properties making them useful for specific things.

Kinetic weapons are human-made gear. The Assault Rifle, Battle Rifle, Sniper or Shotgun. As kinetic weapons, they do increased health damage, but are poor against shielded opponents.

The preferred weapons of the Covenant, plasma weapons include the Plasma Pistol and the Pulse Carbine. Plasma weapons are the inverse of kinetic, they eat through shields but are less effective at doing direct health damage.

These are the Forerunner weapons introduced in Halo 4. They have distinctive angular designs, such as the Cindershot or the Heatwave. Hard-light weapons do equal shield and health damage, and are distinctive for how their shots ricochet off walls.

This class of weapon is entirely new in Halo Infinite. So far we have seen the Shock Rifle and the Disruptor, a shock pistol. The shock weapons are interesting, they don’t seem to have as much damage output as other weapons but they have more utility. For example, landing shots with the Shock Rifle will chain electricity to other nearby enemies. As well as that, the plasma pistol’s EMP ability has been given to shock weapons. Two shots on a Shock Rifle is enough to bring a vehicle to a screeching halt.

Your average, everyday tools of the trade can be found all over. In each match you will start with two; the Assault Rifle and the Sidekick, Halo Infinite’s take on the classic magnum pistol. Other weapons can be acquired from weapon racks around the map. If the weapon is unavailable, check the bar at the top of the rack. That is a progress bar telling you how long until the weapon spawns. If the weapon outline is red, that means the weapon is on the map and will not begin to respawn until that one is used up.

The Halo Infinite Assault Rifle is quite powerful, in previous games it was barely a placeholder weapon. Now it feels a lot more viable, reducing the stress of getting a better weapon. You’ll still want to replace it when you can, so be on the lookout for available weapons. The Sidekick is a wonderful sidearm, it’s fast and accurate, so keep it close. The classic choice is the Battle Rifle, a burst fire rifle that can be deadly in the right hands. If you are new to Halo, grab a BR when you can and get to grips with it.

Another option is the brand new Commando rifle. This is a fully automatic kinetic weapon, with a slower rate of fire than the Assault Rifle but a lot more power. The Commando is a great addition to the game and ideal for new players who want a friendly weapon to get familiar with.

Alien and other Weapons

Over in the plasma weapons, two of your likely finds here will be the Pulse Carbine and the Plasma Pistol. The Pulse Carbine is new, and it’s a different weapon from what we’re used to in Halo. At close range it is very ineffective, but at long range it can be deadly with it’s tracking shots. The Plasma Pistol is a classic multiplayer weapon. A fully charged shot will strip an enemy’s shield in one, leaving them open to a quick Battle Rifle burst to the head. Lastly here is the classic Needler, which still exists to riddle enemies with pink projectiles.

Shock weapons are best used when enemies are closely gathered. Either pepper them with shots from the Disruptor or hit them from range with the Shock Rifle. The most common hard-light weapon you’ll see is the Heatwave, a shotgun style weapon that fires a row of bullets. Speaking of shotguns, the classic shotgun has been downgraded to a regular weapon. The Bulldog lacks the damage of it’s older brother, but makes up for it with fire rate. Not enough to still be a power weapon, but certainly a strong one.

Controlling power weapons has always been a key factor in Halo multiplayer. Unlike basic weapons, which spawn regularly on weapon racks, power weapons have specific spawn points where they spawn at the same time every match. These locations are neutral, usually somewhere in the middle of the map so players can fight over them. There is a wide arsenal of power weapons in Halo Infinite, both old and new. Let’s talk about them and what their uses are.

The tried and true Halo sniper is here in all it’s glory. If you have played Halo, you’ll know this sniper rifle and the damage it can do. In Halo Infinite it has stayed true to form, and is a crucial weapon to control.

The Hydra returns from Halo 5, this explosive weapon provides a mid-point between the rocket launcher and a grenade launcher. It fires multiple explosive rounds at once which track enemies. Not comparable to a rocket for damage, but will at least throw the enemy team into disarray.

The gravity hammer is a gigantic hammer that hits so hard, it will send you backwards as well. Devastating at close range, so be quick on your feet when wielding it.

Similar to the hammer, the sword is lethal up close. Closing the distance is key with either of these weapons, while the hammer has a greater area of effect the sword makes up for that with a lock on that lunges you at your opponent.

This brutish Banished weapon launches a giant spike at extreme speed. It is as ridiculous as it is deadly.

That is our guide to the weapons of Halo Infinite. Hopefully you have a better idea now of what to use and where to use them! For more Halo Infinite tips, check out our guides on equipment, armour customisation and what’s new in Halo Infinite!