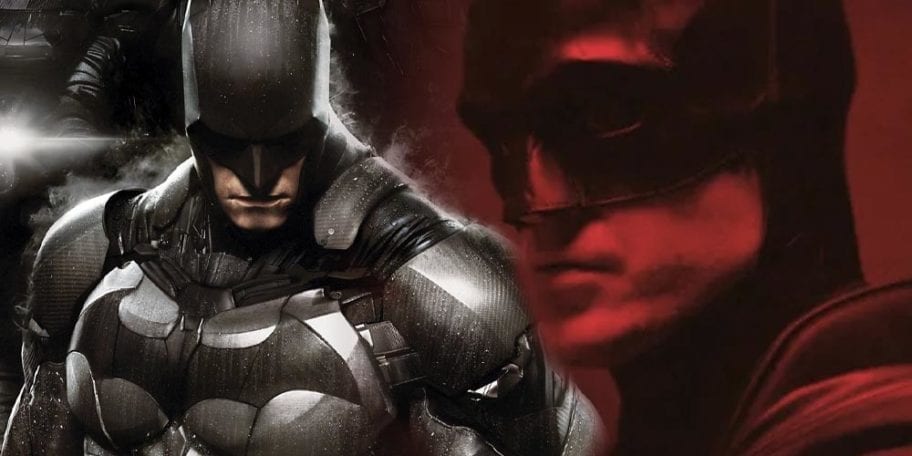 ICYMI Matt Reeves recently dropped a first look at Robert Pattinson’s Batman costume, and fans finally know what the new era of the Caped Crusader will look like in The Batman. As Pattinson takes over from Ben Affleck to play Bruce Wayne and his brooding vigilante alter ego, Reeves is going for a much younger version of Batman.

There’s plenty of hype as The Batman races toward its release date in the Batmobile and boasts an all-star cast of Pattinson, Zoë Kravitz, Jeffrey Wright, Paul Dano, and Colin Farrell.

The Twilight star will be leaping over the Gotham City skyline in the cape and cowl, however, what does the first reveal tell us about Pattinson’s tenure as the Dark Knight?

The aesthetic of Reeves’ reveal conjures up visions of Frank Miller’s Batman: Year One. Although critics were quick to poke fun at the Pattinson costume and compared it to Netflix’s Daredevil thanks to the red lighting, others picked up on the Year One reference.

Year One‘s cover features Batman leaping out of the shadows against a red backdrop. Although Reeves has repeatedly said The Batman won’t be based on Miller’s seminal graphic novel, it’s still a nice idea.

In fact, the latest rumours suggest it will combine several Year One elements without being a direct adaptation. This ties together with Jim Gordon not having yet reached the rank of Commissioner and a more ragtag version of Batman.

We’ve come a long way from the awkward years where Batman video games were some of the worst out there. Interestingly, it looks like Reeves has taken at least some inspiration from Rocksteady’s acclaimed Arkham games.

Putting plenty of ‘dark’ back in the Dark Knight, the trilogy of games gave a Christopher Nolan-inspired realistic twist to Batman and his rogue’s gallery. In the games, Bruce spent his days roaming Arkham Asylum, Arkham City, and (eventually) all of Gotham in a robotic suit made out of metallic plates.

Looking at Pattinson’s outfit, there’s definitely some Arkham-esque armour that looks a little more military than we’re used to. The big question is, will The Batman also feature Lucius Fox providing Bruce with this snazzy tech?

Similar to the Arkham trilogy, Lee Bermejo’s Joker and Batman: Damned graphic novel featured a geometric design for the Batsuit crafted from boxy plates. As another potential clue, Batman: Damned also had a metal emblem in the middle of his chest.

Bermejo was known for creating more realistic versions of characters, like Batman and Joker, that you genuinely run into in day-to-day life. Similarly to how Nolan’s Dark Knight trilogy portrayed Batman and his rogues, Reeves looks to be going down the same route.

Other prevailing rumours claim The Batman will be based on Batman: The Long Halloween. We’ll have to wait and see, but it just so happens the graphic novel Dark Victory is the direct sequel to The Long Halloween and shares some VERY similar visuals to Battinson.

Speaking on his Fatman Beyond podcast, Bat-fan Kevin Smith is pretty convinced Reeves will finally bring The Long Halloween to life on the silver screen, meaning the Dark Victory similarities could be a clever nod.

When it comes to the cowl, others have noted the stitching on the mask could relate to Batman: Earth One. When you strip back the red colouring on The Batman‘s costume reveal, you can see stitching and a much thinner version of what looks like a leather cowl.

In Geoff Johns and Gary Frank’s graphic novel series, there’s an amateurish version of Bruce with a homemade costume. Ironically, Earth One Bruce had stitching on his cowl.

Frank has reiterated his Batman was supposed to be less established than most iterations of the character, which also fits with Reeves’ plans.

The tale followed Batman tracking down Jack the Ripper, and while that definitely won’t be part of The Batman, there’s a neat costume choice in Bruce’s new wardrobe. Looking at Pattinson’s outfit, many picked up on the raised collar — something used in Gotham By Gaslight.

In reality, it’s probably because Batman’s inability to move his neck has become a constant niggle of the stars who’ve played him *cough* Keaton *cough*. Bruce still needs to protect his neck, meaning a raised collar gives the freedom of movement and a way to protect his jugular.

Perhaps the biggest reveal is the Bat Symbol emblazoned on the Caped Crusader’s chest. The main school of thought right now is that this is more than just a tactical design.

Heading back to Detective Comics #1000, Bruce famously bought Joe Chill’s gun — the one that killed his parents — and melted it down to make part of his suit.

Just as long as we don’t get ANOTHER flashback to Crime Alley, we’ll be fine. The Batman should go down the Uncle Ben/Spider-Man: Homecoming route and just leave the implication that we all know what happened to Thomas and Martha Wayne.

Remembering back to Affleck’s Batman reveal, at least Reeves is causing a stir for all the right reasons with Pattinson’s outfit. As The Batman prepares to swoop into our lives, it looks like Reeves is lighting up the Bat Signal with a Batman movie for the ages.