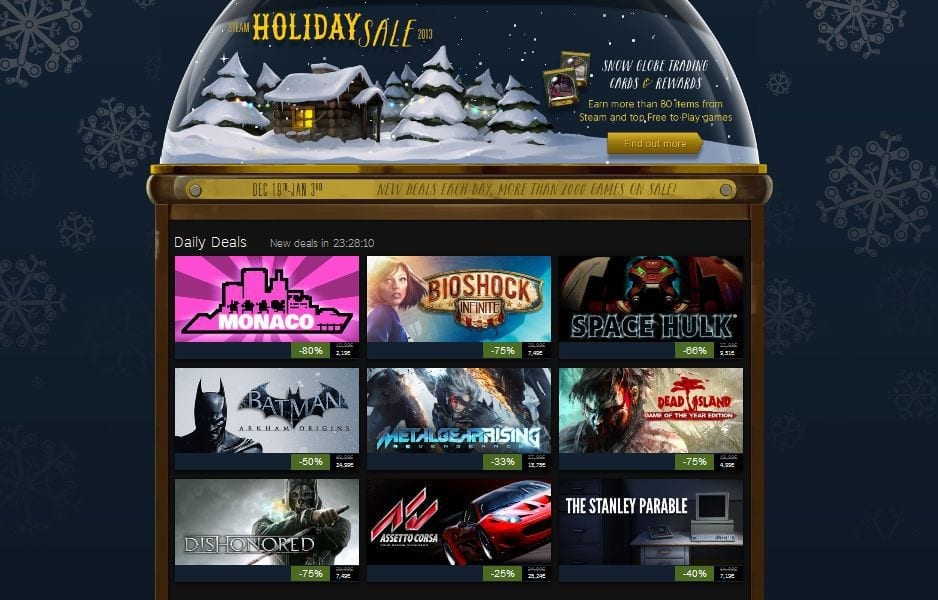 Here’s which video game Christmas sales are returning in 2017.

This list includes sales for video games on PC, Xbox One, and PS4. No matter what your console of choice is, there should be at least one sale on this list that you’ll be interested in keeping an eye out for. 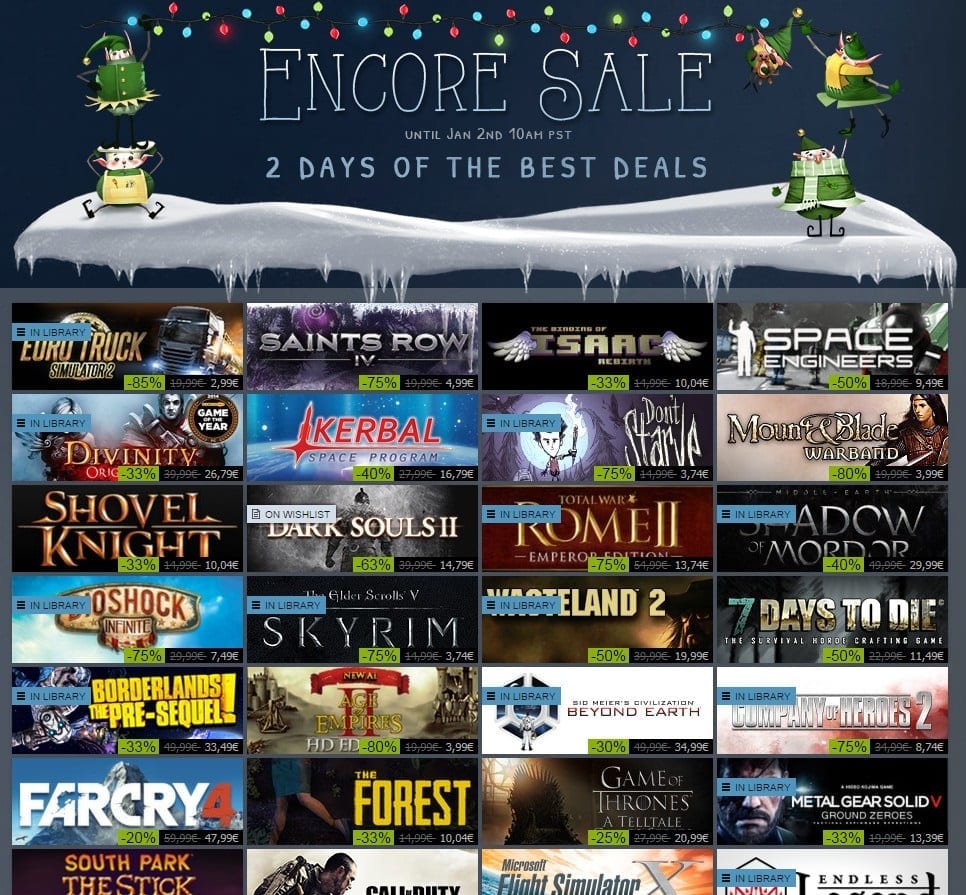 The Steam winter sale usually takes place just before Christmas. The sales will continue on until the start of next year.

Usually, Steam has a big sale for each season of the year, but it’s the winter sale that often gets the most attention.

Not only do developers put some of their best discounts up for the year, but Steam often releases different adventure systems that players can take part in to unlock trading cards and Steam backgrounds. If you’re into that kind of thing, you’ll want to keep an eye out for the Steam winter sale.

The Steam winter sale started on December 21 last year, so we expect it to return during a similar time period this year. The 2017 Autumn sale only started in November, so you may still be able to pick up a good deal on a new game before all of the sale prices get reverted.

Sometimes, Ubisoft will even give away free games or DLC as part of their ‘30 days of Christmas’ campaign. Last year, Rayman Classic was given away for free and a competition to win more games was opened up to uPlay players. 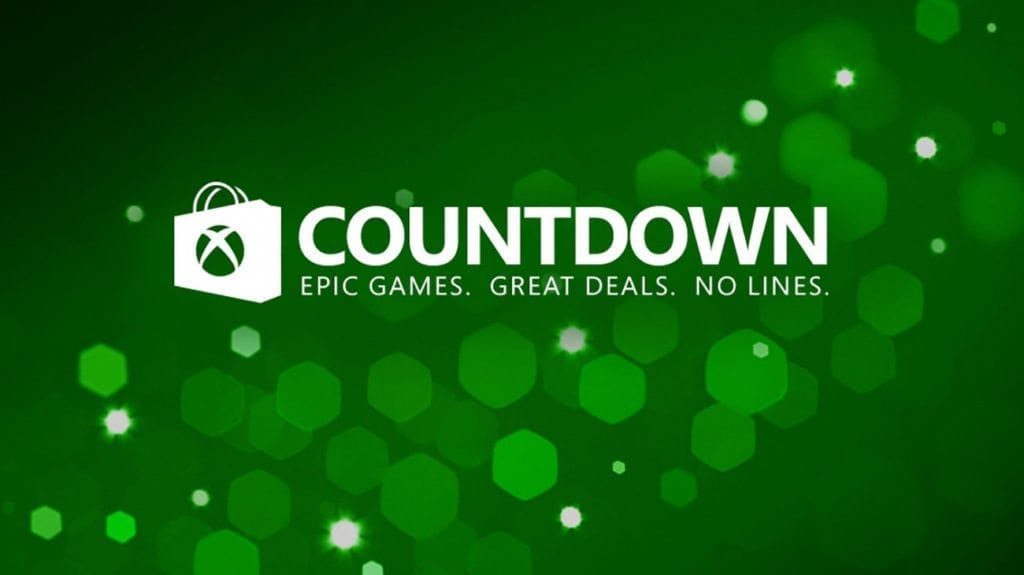 If you don’t have a gaming PC, chances are the sales listed above won’t be of any interest to you. Thankfully, you won’t be missing out if you’re a console owner.

The Xbox Games Store often promotes a variety of different festive discounts and deals throughout December. Microsoft don’t always scream and shout about their deals and will instead tuck their best offers into a new page on the Xbox dashboard and the official Xbox website.

Make sure to keep an eye out for Xbox Games Store discounts throughout December. 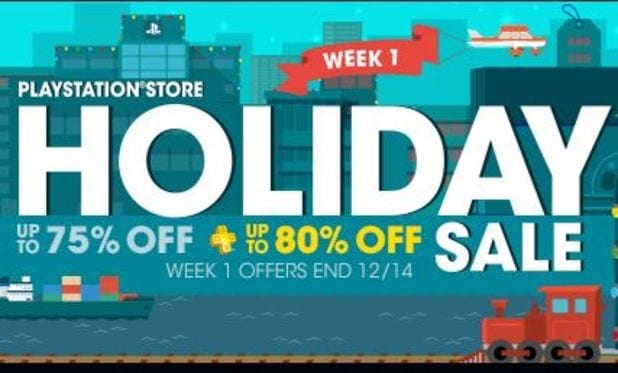 Whilst team Xbox keep quiet about their holiday sales, Sony likes to shout it out to the world. Last year, Sony ran the PSN Holiday Sale which consisted of four straight weeks of glorious deals.

If the same happens this year, the PSN Holiday Sale should start around the 5-6th of December and will run for four continuous weeks up into the new year.

Each week will have a different selection of games up for sale, so if nothing interests you the first week, you can always come back in week 2, 3, and 4 to see if there are any deals that you may take an interest in.

The PSN Holiday Sale last year also offered further discounts for PS Plus members. If you had a PS Plus membership, you could save an extra few dollars on each game you purchased. If Sony revisits this discount system and if you plan to purchase multiple games this holiday season but don’t have PS Plus, it may even make sense to subscribe to PS Plus for one month just to get the additional discounts. 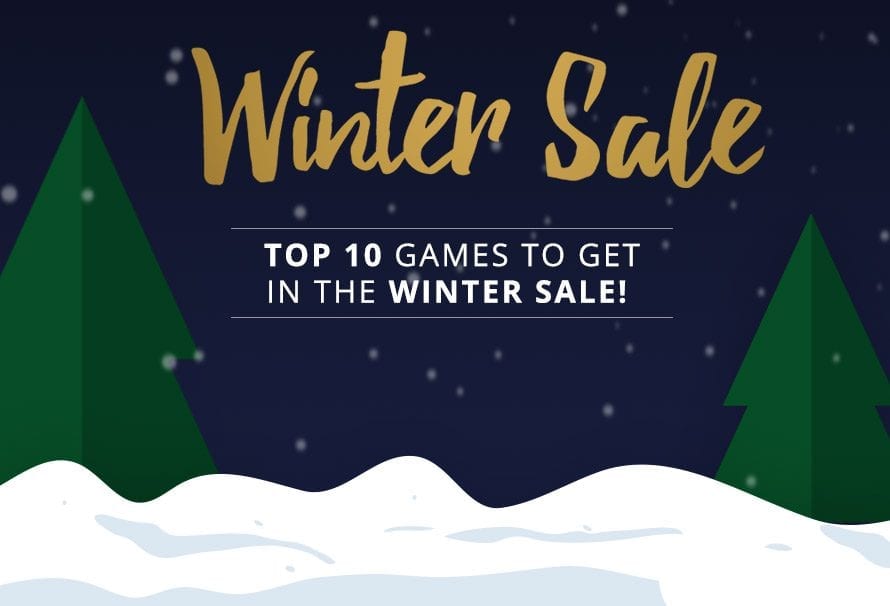 Greenmangaming is an independent online video game retailer that sells digital PC and PlayStation games. They often put items on sale during festive periods. As well as discounting a variety of games, Greenmangaming sometimes gives a site-wide discount so that you can get 10-15% off any game in the store if there isn’t a discount for that game already.
Other Online Video Game Stores

Chances are, most of the online video game retailers will offer a similar price for all of their games when a sale goes live. However, there will be the odd difference between each website. If you’re looking for a particular video game and can’t find any good discounts for it during December, you may want to shop around elsewhere. We’ve listed some honorable mentions below.

Fanatical is a video game bundle website that frequently offers discount prices for a bundle of games. Fanatical also sell games separately and will occasionally offer pretty decent discount prices on these games.

Whilst NewEgg is best known for their computer hardware and accessories, they also sell game keys for a variety of games. You may find the odd gem on here that other websites do not have.

GOG is a unique online game retailer on the internet. GOG sells games without any DRM, so you essentially purchase the game from GOG and you’re then given the download files to download the game onto any platform. You don’t need a game client such as Steam or uPlay.

It’s rare to see a good video game deal on Amazon, but it does happen. Most of the time, the games will be shipped to your house and will include a download code for digital copies or a physical disc.

The Microsoft Store is built straight into the Windows 10 operating system. You’ll find Microsoft exclusive titles on here as well as a few others.

The Humble Bundle is another great video game bundle website – you can often spend $1-2 to get a selection of 5-6 games. There are also plenty of sales going on in the main Humble Bundle store.

Christmas is a big time for retailers – they all know that people are out on the streets looking for good Christmas deals, so they’ll often fight for your custom. If you plan to get a video game or console for Christmas, make sure to shop around a little before purchasing.

You may find that one retailer has a better deal on the item you’re looking for than another. You can always compare retailer prices with online prices before purchasing, too. In most cases, you’ll be able to find a price online that beats any in-store price.

Thanks for reading our guide to the best video game Christmas sales in 2017! Which video games would you like to get hold of this holiday season?