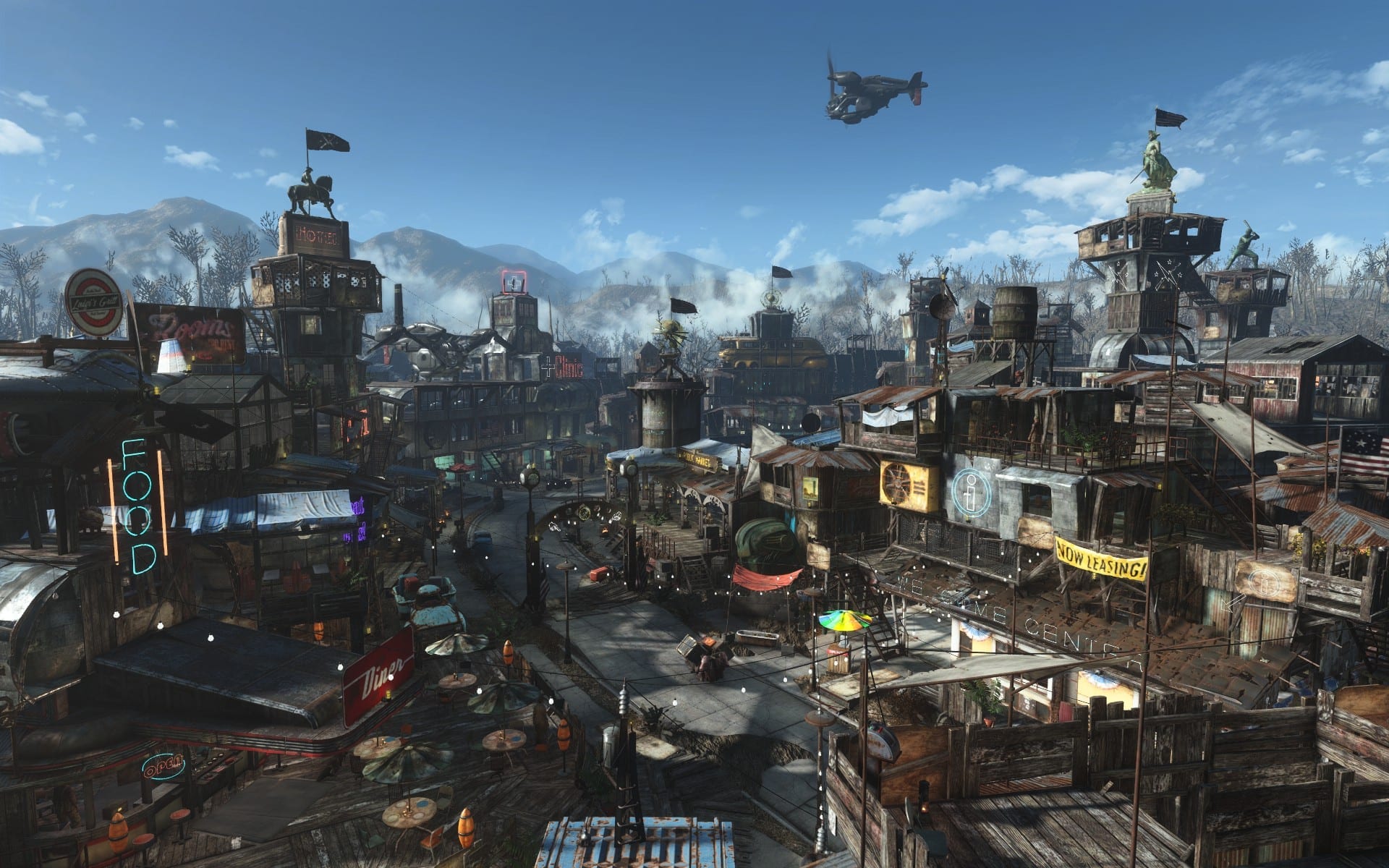 Whether you liked Fallout 4 or not, there’s no denying that the Fallout settlement tools are incredible. Most players looked at the settlement feature as a gimmick sitting on the side, but others saw it as a method to immerse themselves and build up their very own post-apocalyptic city.

In this post, we take a look at some of the most intricate Fallout settlements ever built. We think you’ll be surprised at the detail in some of these creations. 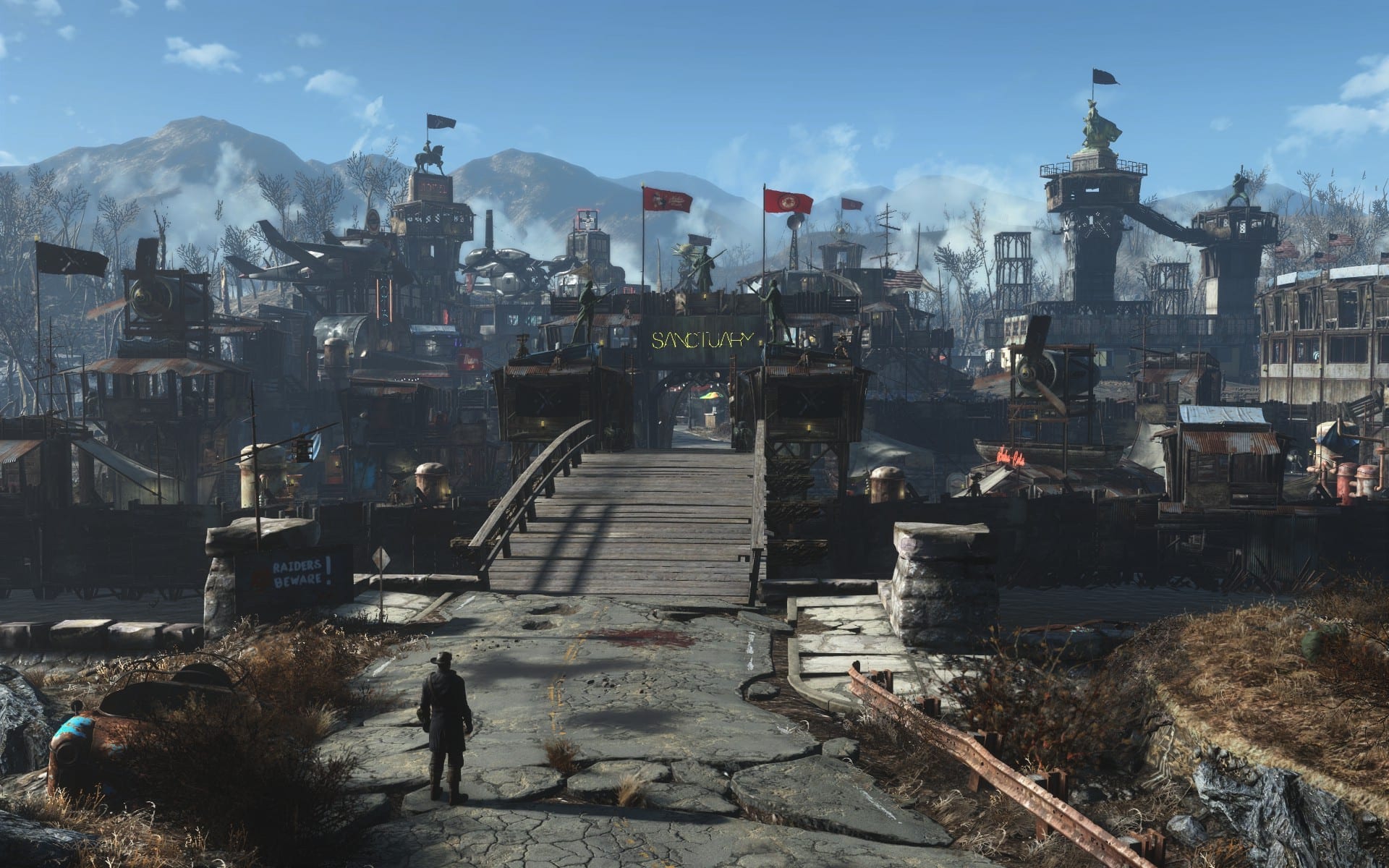 Created by grod4L on Nexusmods, this is by far one of the biggest settlements we’ve ever seen. Not only is it big, but the thing is jam-packed with detail. Apparently, grod4L was only getting 10 frames per second on a 980 TI when he first created it. We can’t imagine what it’d be like when playing with Fallout’s 4K textures.

As you can see from the first image above, this sanctuary has bright neon lights leading survivors into the front entrance. Once you’re on the other side, you’re transported to somewhere that’s filled with bustling activity. 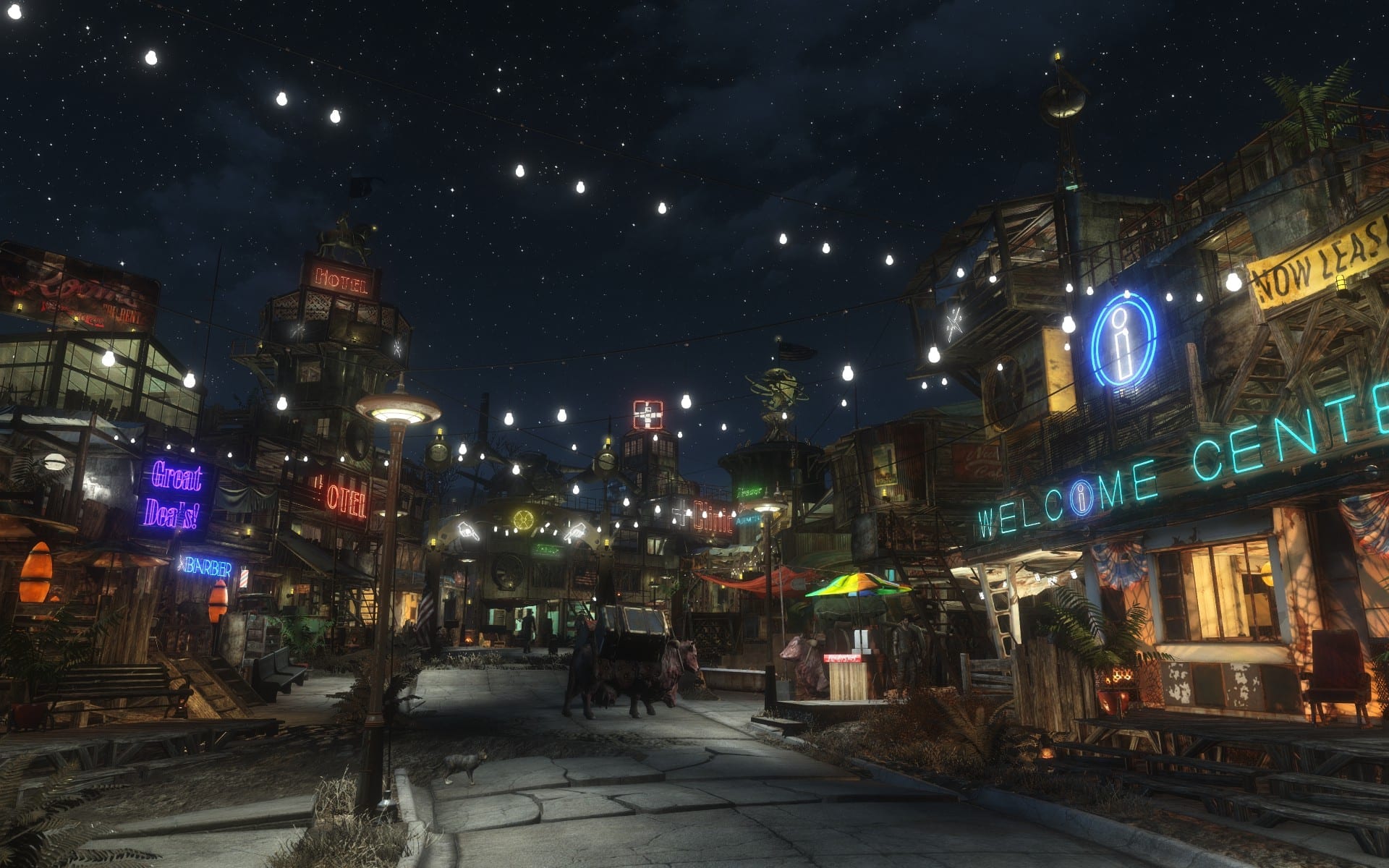 There are shop lights coming from every corner. More lights are hung up overhead to light the streets and buildings are thrown into every nook and cranny. This is what I had always imagined post-apocalyptic Earth to look like. 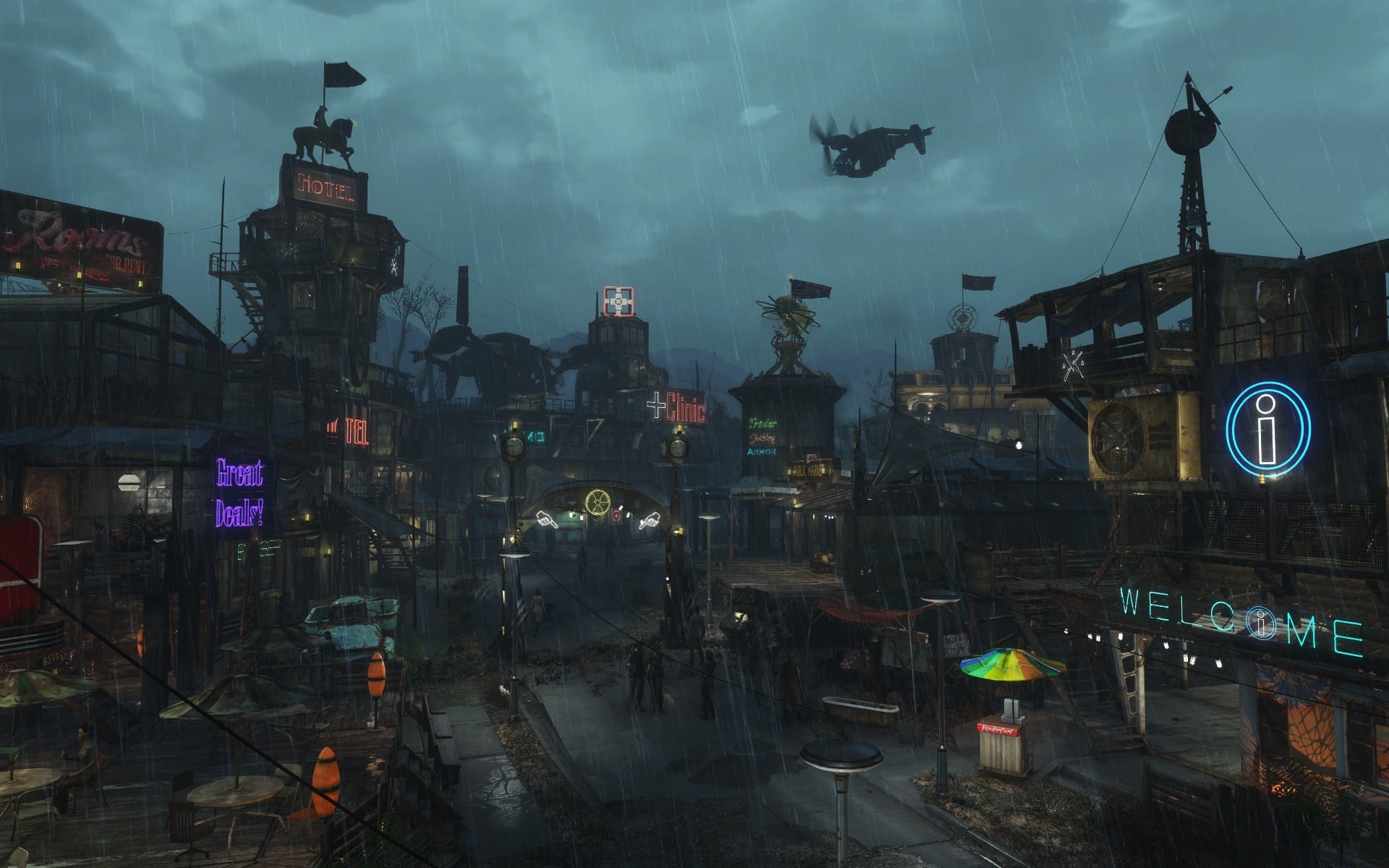 Above is one last image showcasing what the settlement looks like when rain starts to pour down. It’s strangely beautiful. I know this is the apocalypse and all, but I get the feeling that I wouldn’t mind living here. 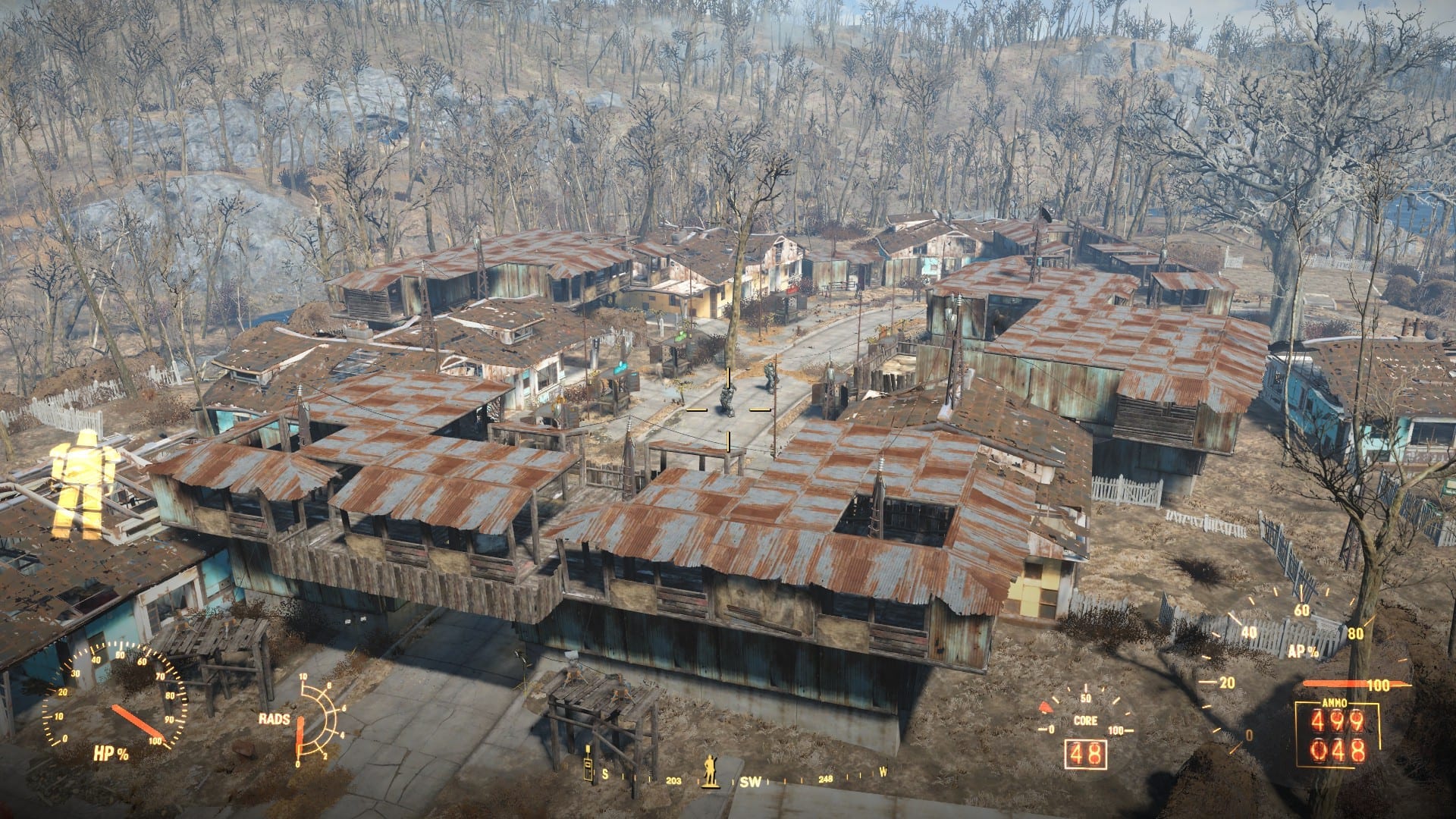 Jarvvski posted his shanty town settlement on Reddit here and I was very impressed with it when I first saw it. This one differs to the Sanctuary City settlement in many ways, but it’s equally as impressive.

Whilst Sanctuary City showcases itself as a grand settlement with a bustling community, Shanty Town gives players the assumption that it’s inhabitants are still struggling to get by.

The buildings and walls are part up with rusty pieces of corrugated iron, the streets are bare and there’s little activity within the town’s walls. 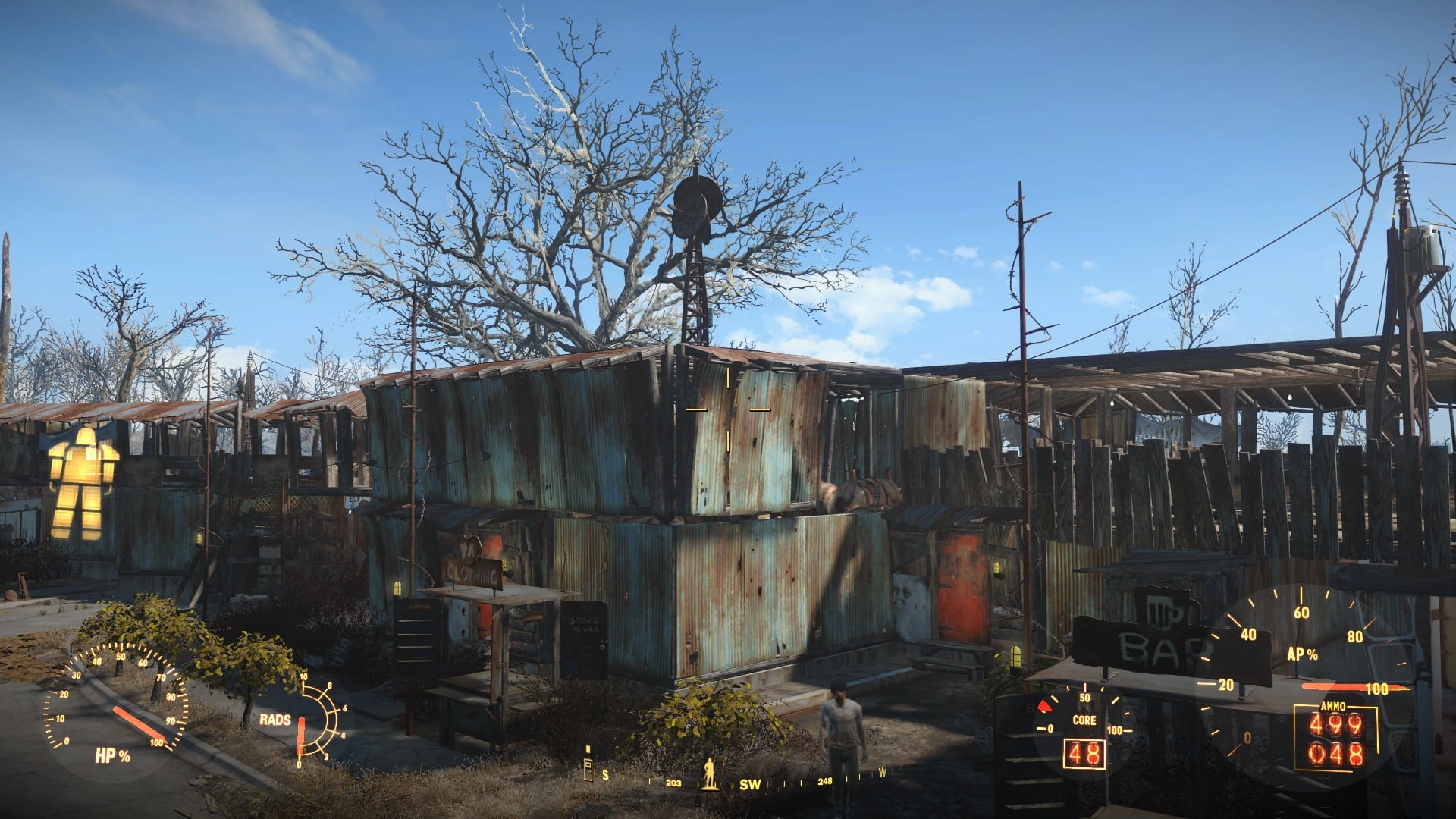 The few shops that are open have signs drawn out on pieces of wood. The rest of the area gives us the idea that the place has been shoddily put together by the settlers with whatever equipment they can get their hands on. 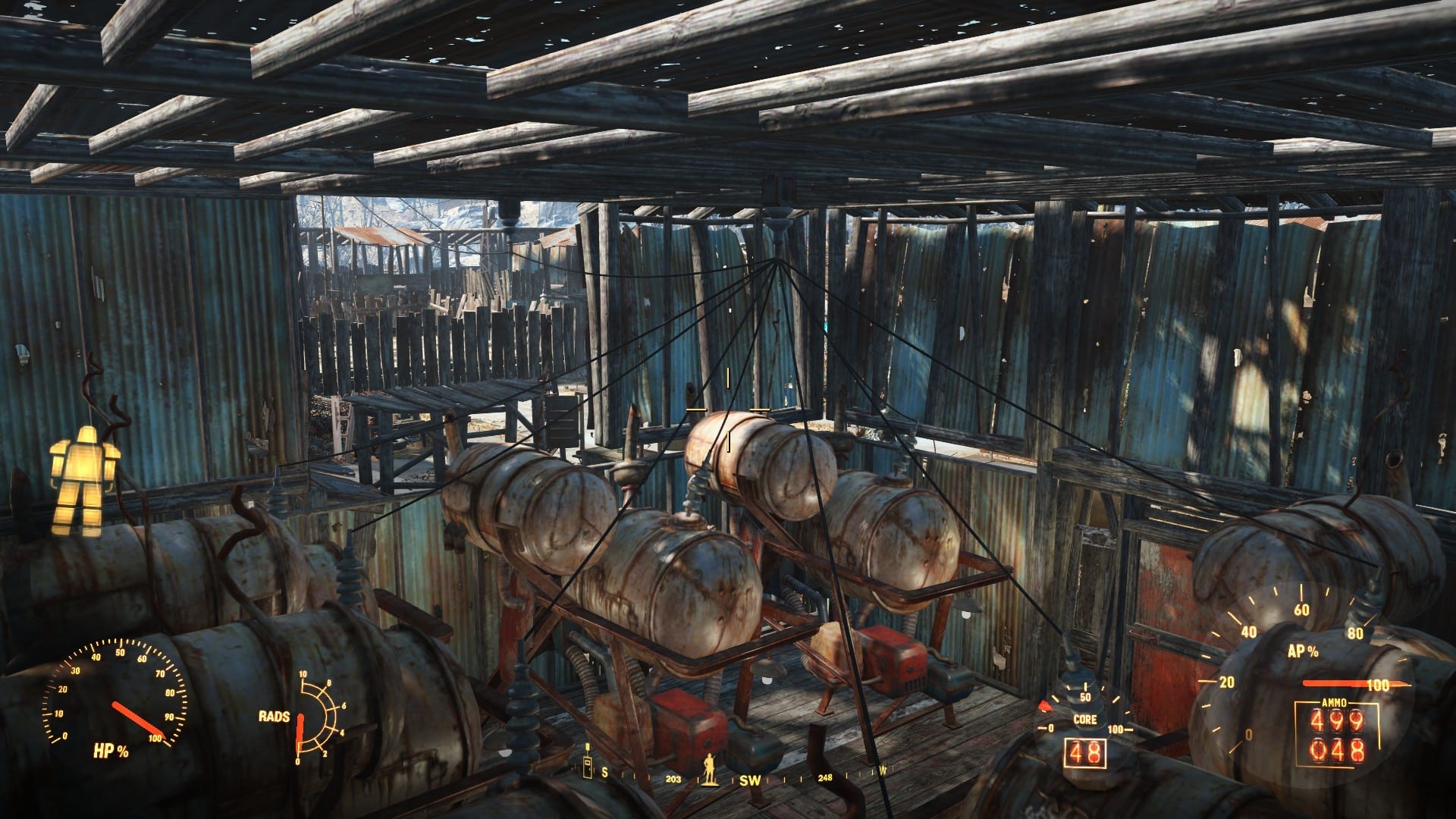 Interestingly, the generators to power the town are just thrown in a spare room in plain sight of everybody within the town. These images show us how difficult living in the Fallout 4 universe must be. 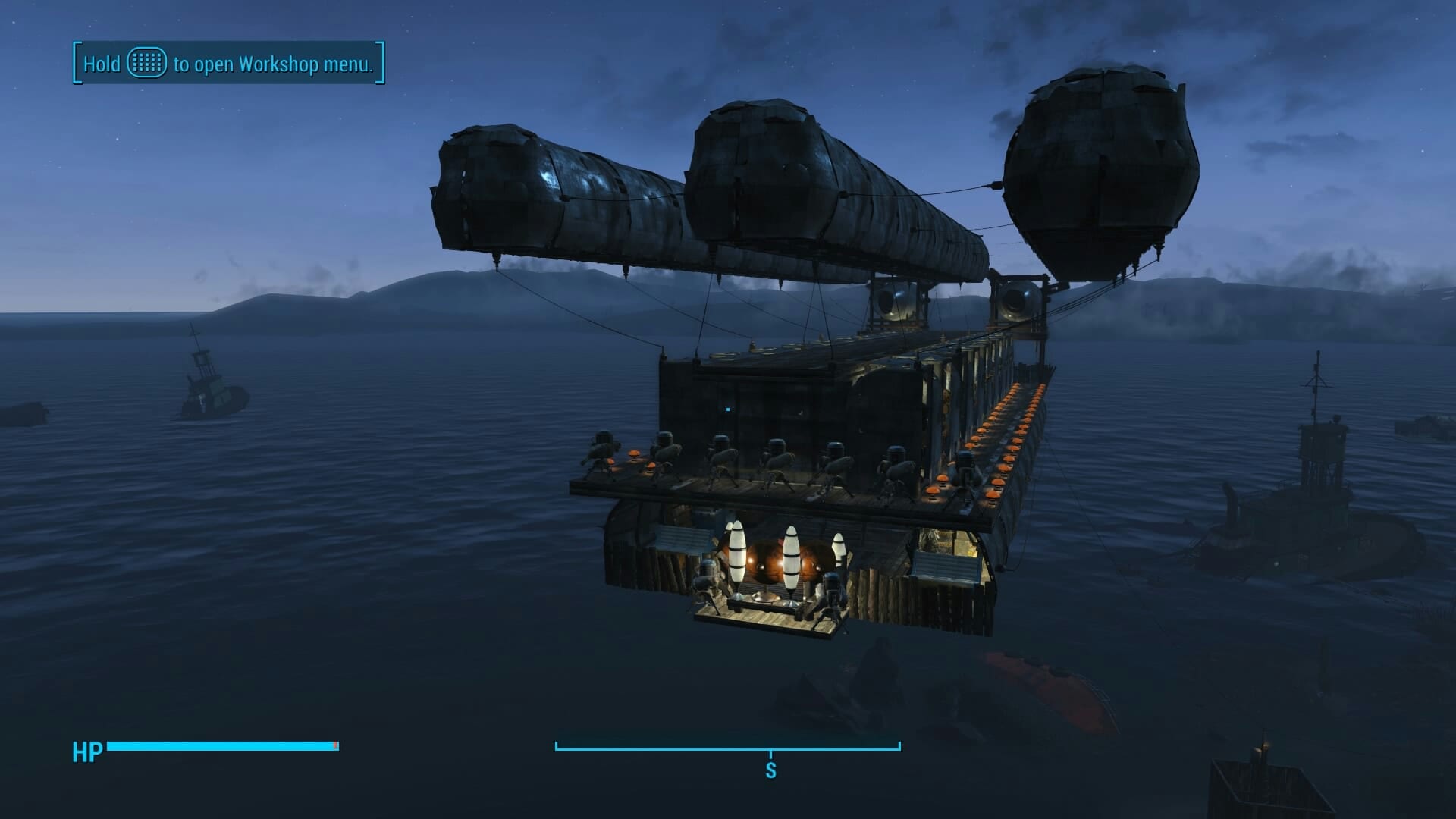 We’re big fans of this next settlement. Tuppaca managed to build an airship filled with power armor with the Fallout 4 settlement tools and it’s absolutely incredible.

The inside is filled to the brim with power armor. Looking at the picture I’ve posted below has sent my imagination crazy. Imagine an alternate version of Fallout where the Brotherhood of Steel commandeer airships.

We could imagine them hovering over nearby settlements and then jumping down to the ground to loot the area, before zipping back out of sight in the airship. 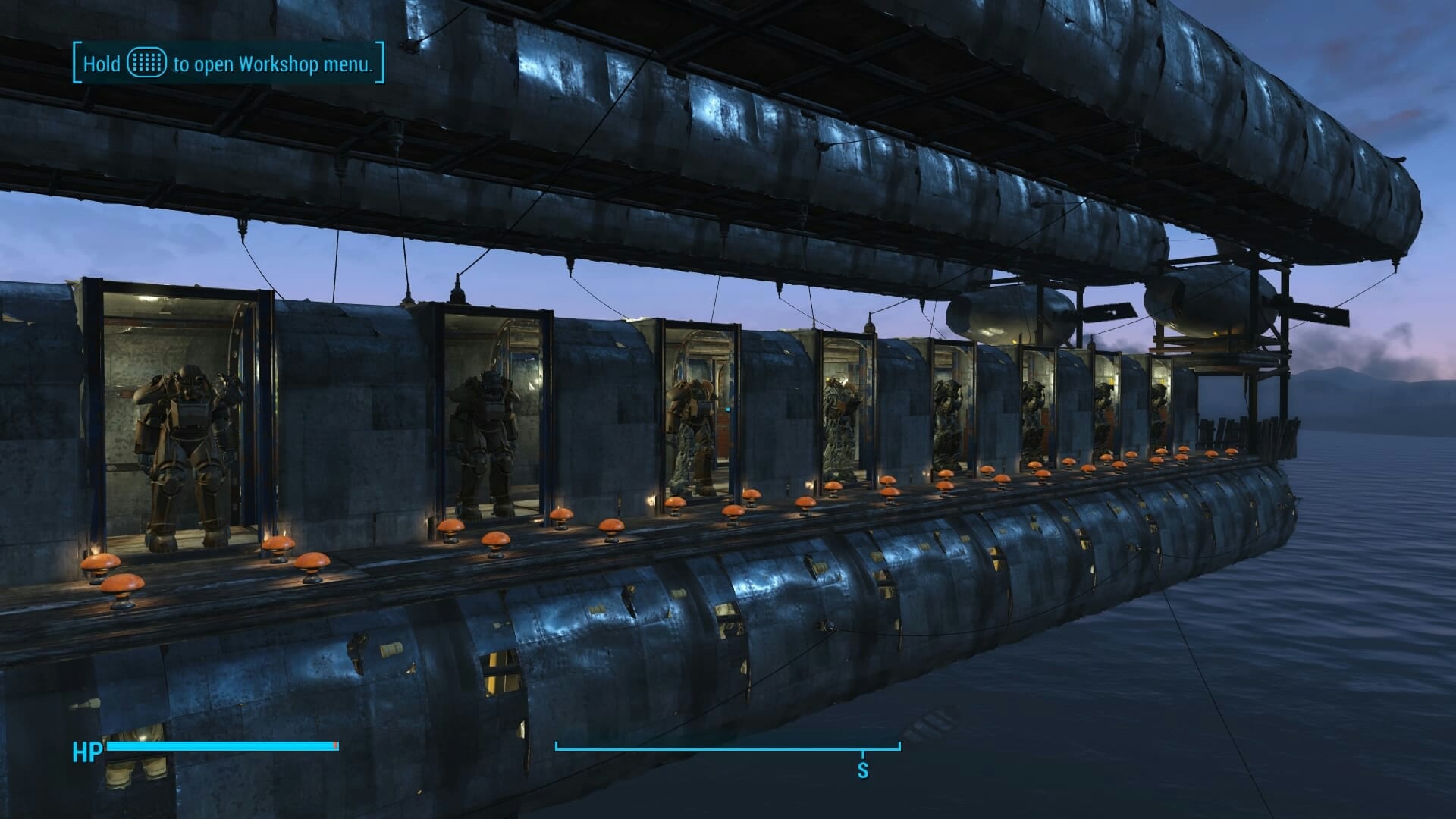 Okay, maybe my imagination is going a little too far now, but there’s no denying that this thing is incredible. 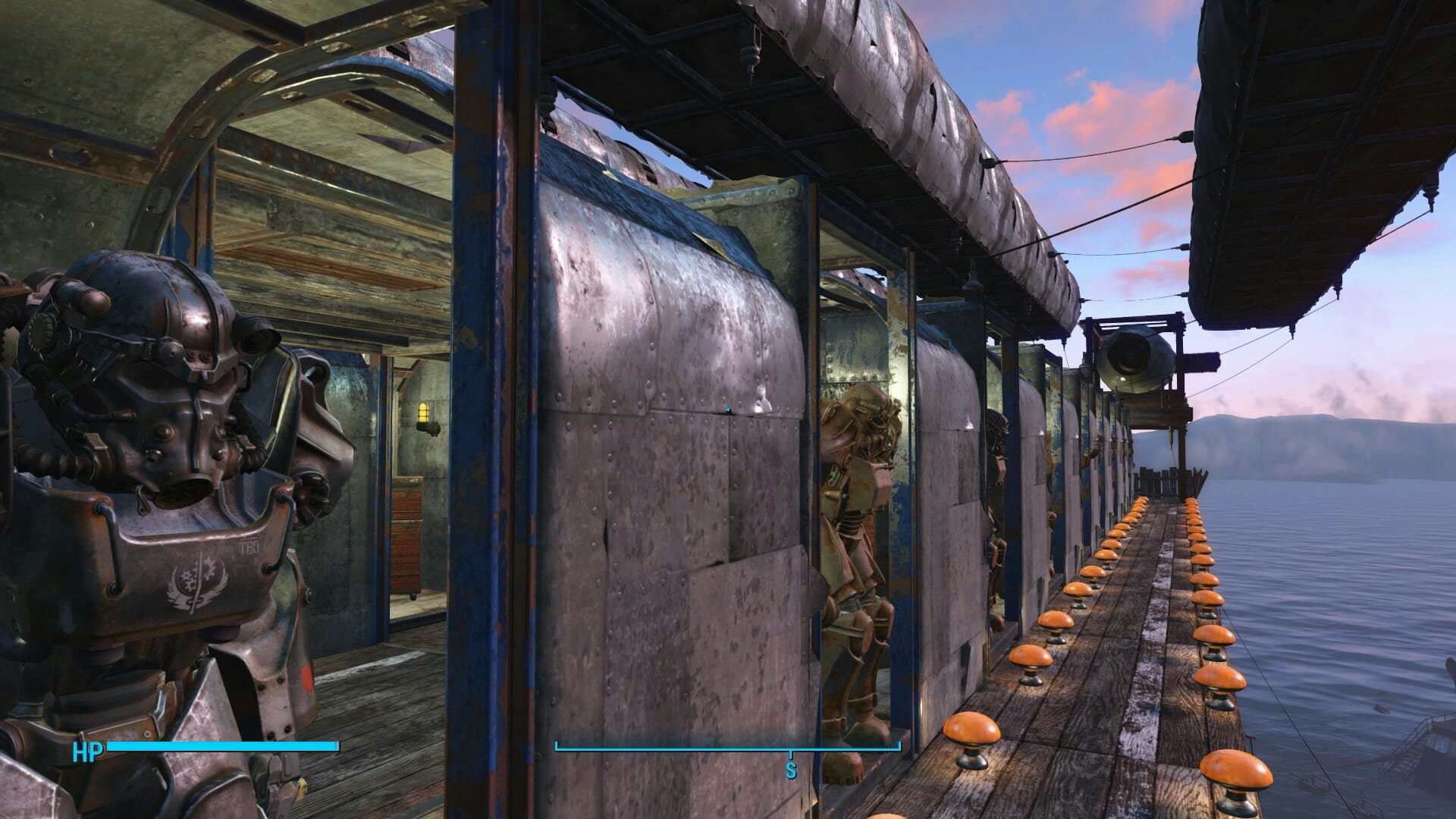 If you’re curious about how this was built – players can place staircases up into the sky, build the airship, and then remove the original stairs. To get up onto the airship, players can use welcome mats to fast travel to and from. 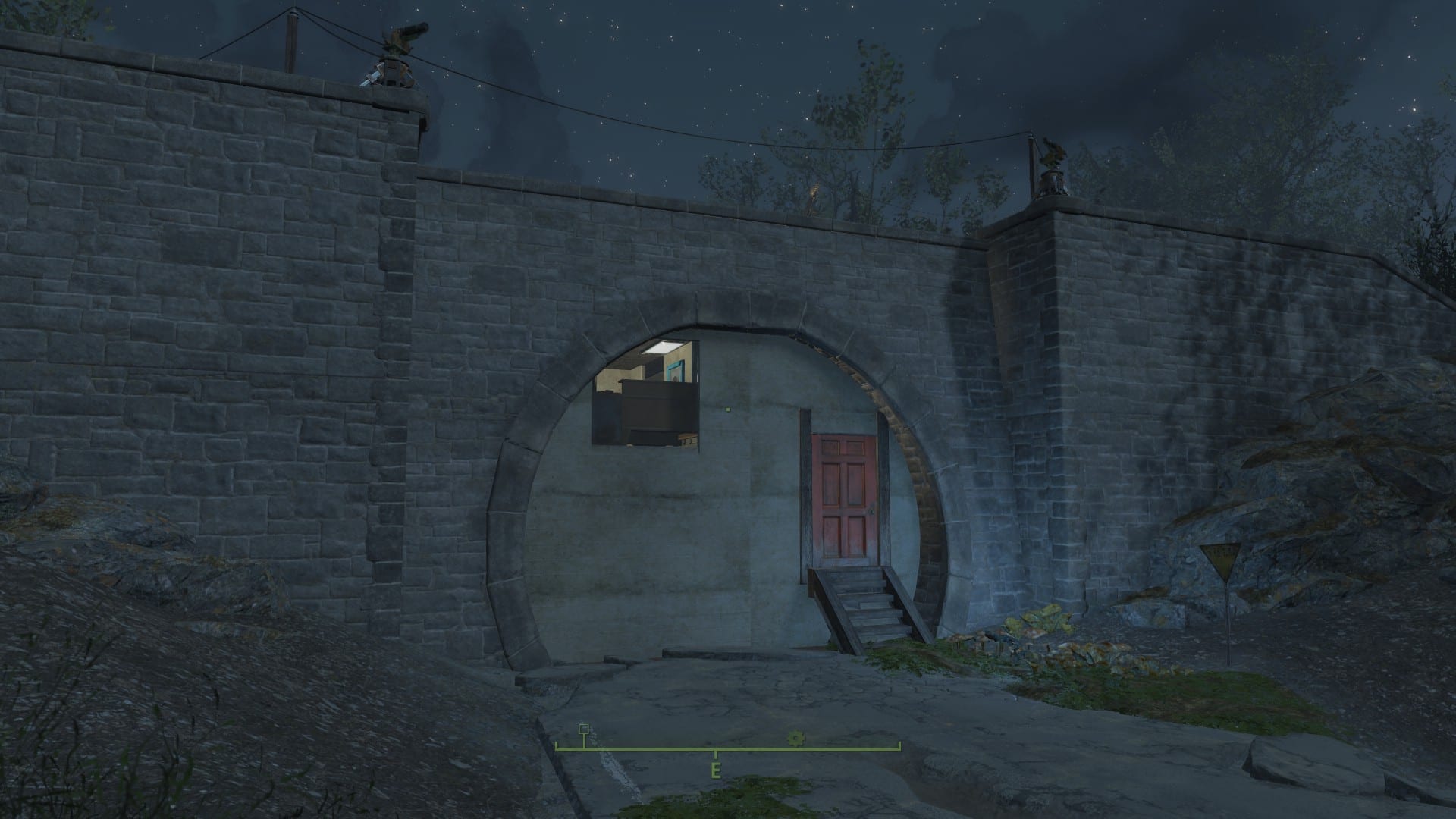 Most Fallout settlements are designed to incorporate an entire community of settlers, but not Stanonwheels’ settlement.

Stanonwheels found a small tunnel he liked the look of, and with the power of console commands on the PC, he was able to create a settlement inside it.

Despite the small size, the tunnel is filled with detail. Everything in this house has been placed down to make it feel lived in. Toolboxes are strewn across various workbenches, furniture is placed throughout different areas, and a large table takes up the majority of the kitchen area. 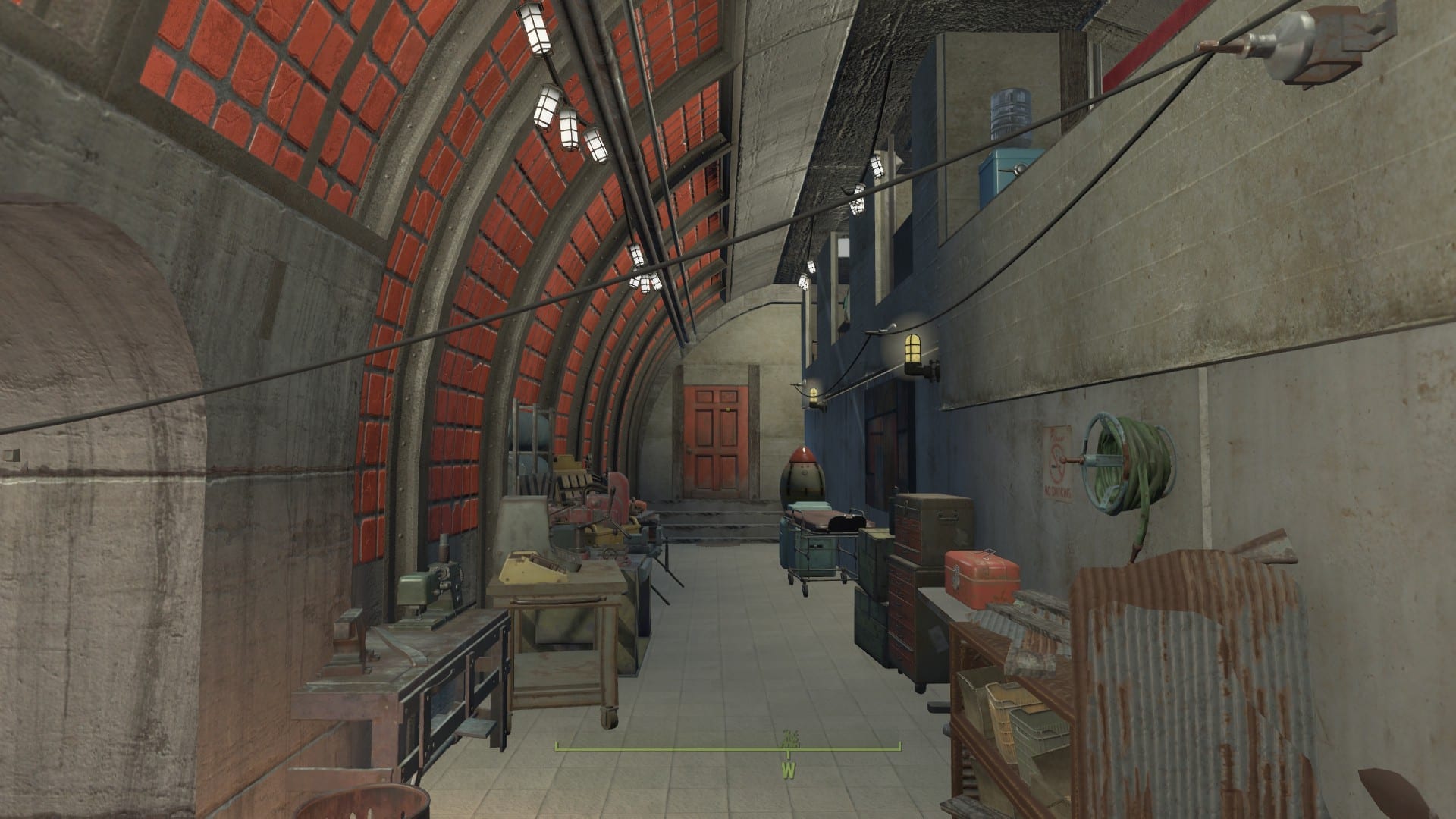 In the image above, the work area can be seen. It’s on a separate floor to the bedroom, a restroom, and a living area. You can see the entire layout of the home in the image below. 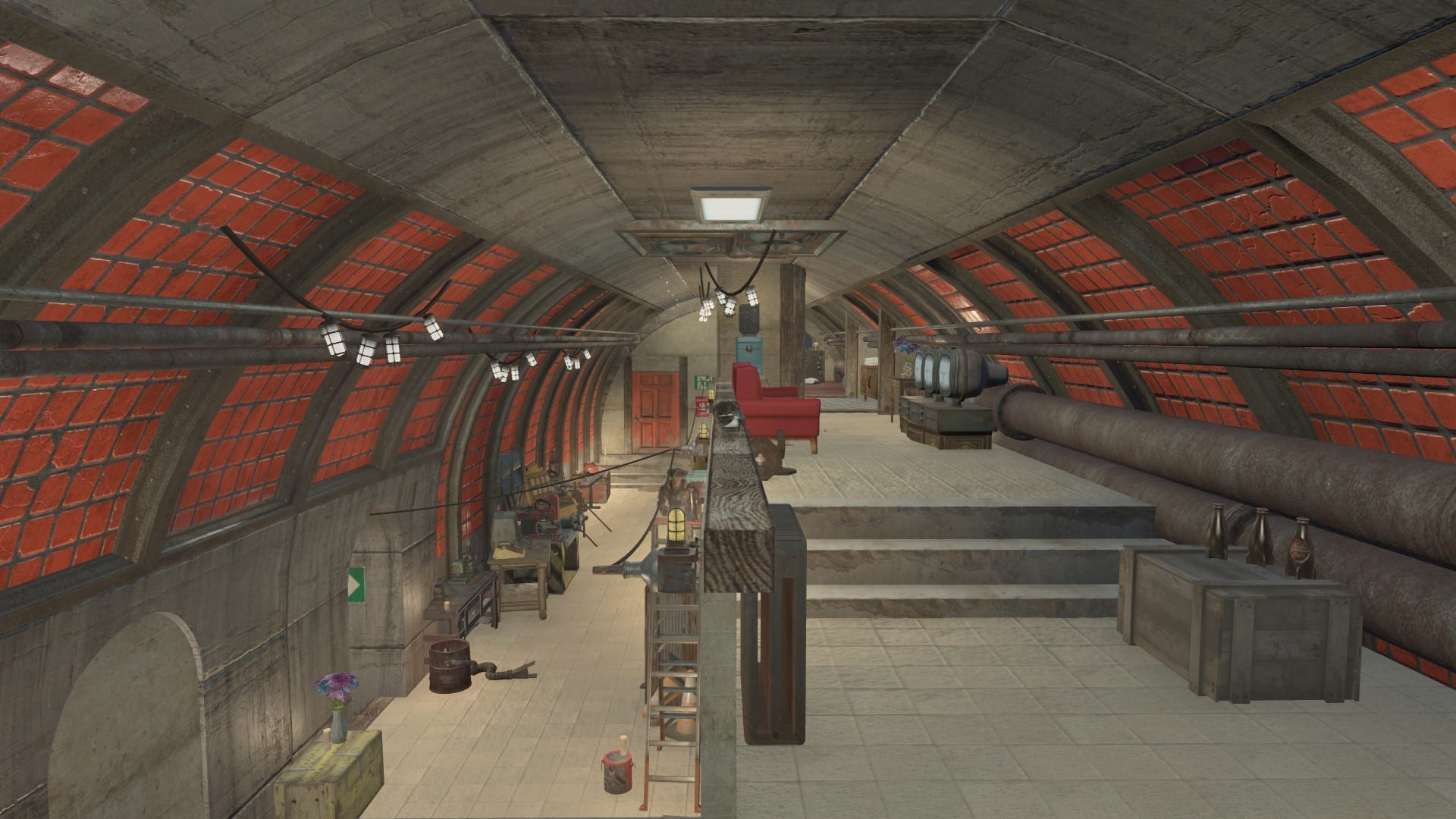 There’s so much to take a look at in this home, so make sure to look at the link we posted above. In the meantime, you can take a look at my favorite room below. This is the kitchen area I mentioned previously 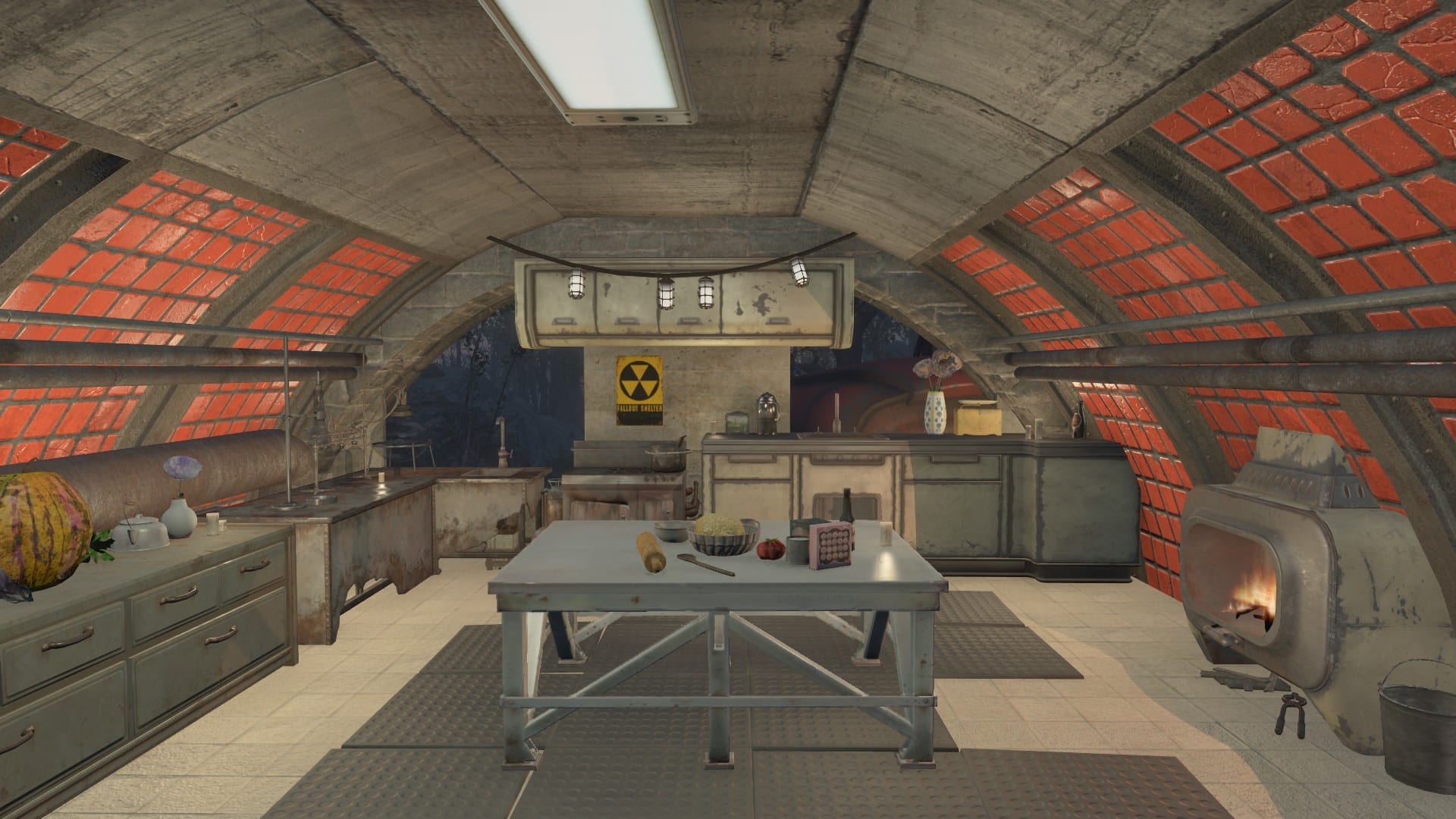 Overall, I really liked this design because it showed that you can still be very creative with decorating interior areas – it’s not all about making great settlements. 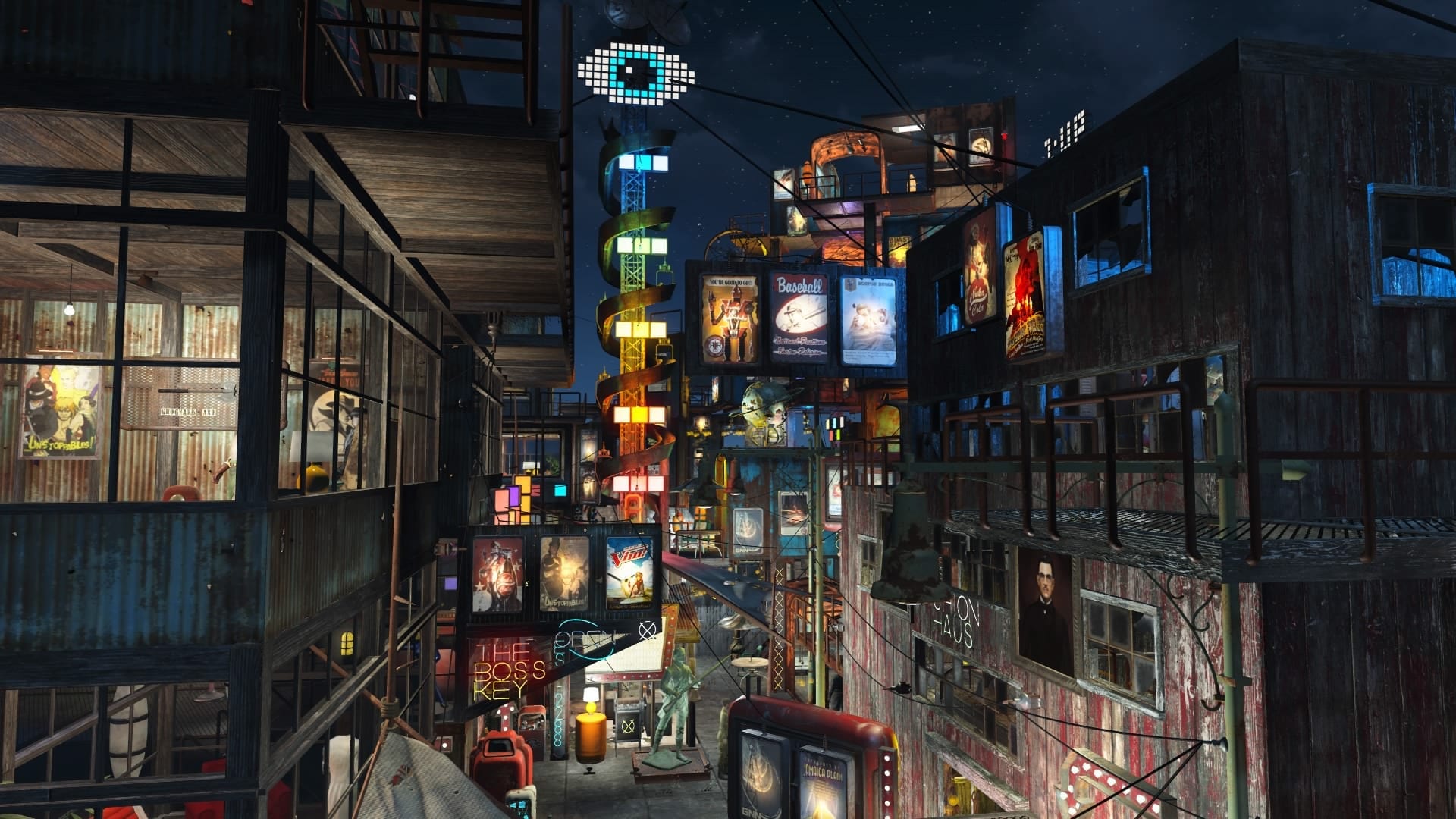 Built by Jordandrenglish on the PS4, this entire city was created without any mods. Jordandrenglish did use a glitch to increase the number of items he could use in the settlement, but even still, the amount of work that went into this settlement is crazy.

Castle City is another great bustling settlement filled with life and activity. The buildings in Castle City are more densely built together than other settlements shown so far, but it makes the entire thing feel very hectic. I almost feel like I’m looking at a post apocalyptic version of Tokyo. 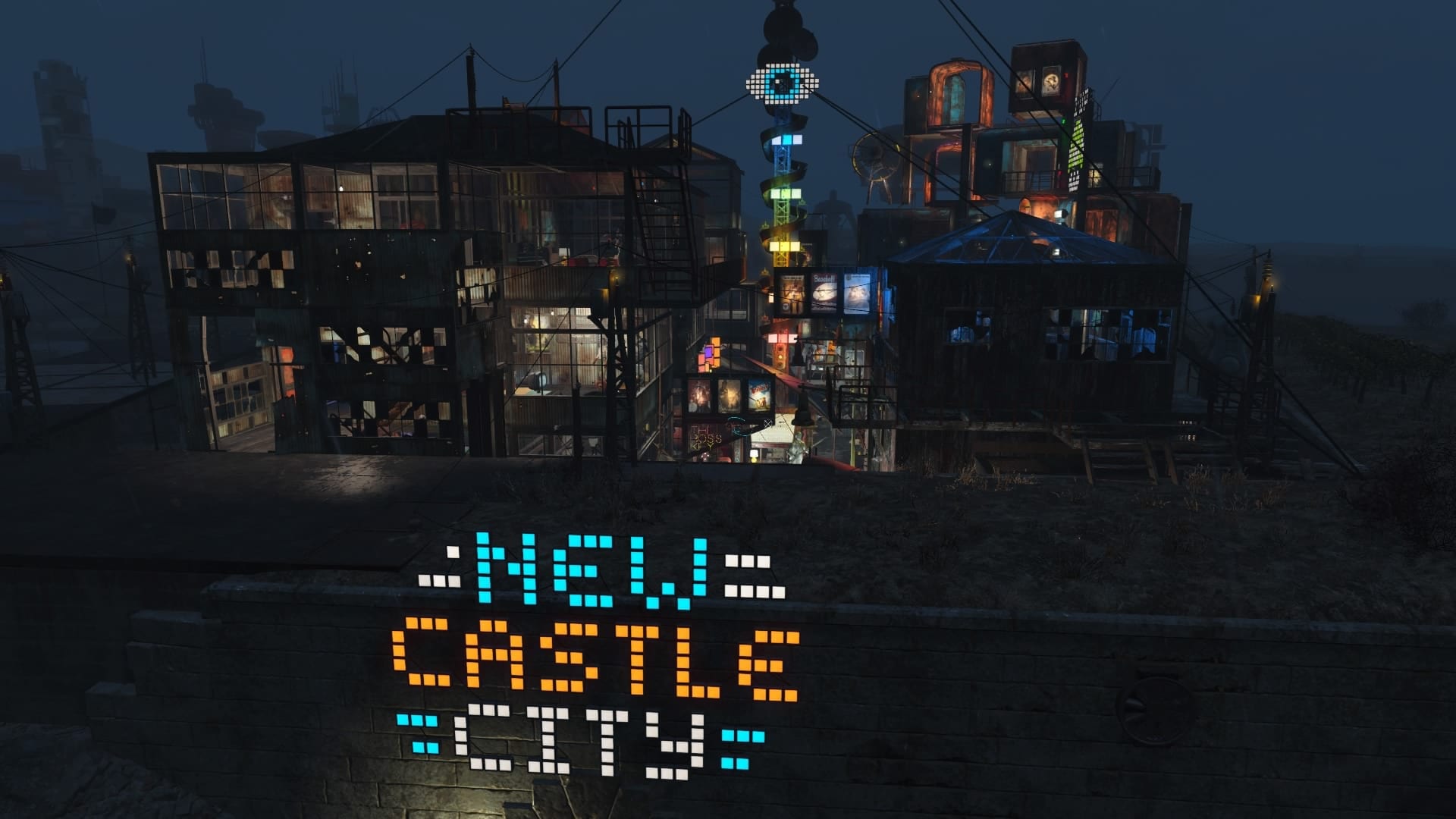 The entire settlement doesn’t actually take up that much space. In the image below, you can see the overall size of the settlement. 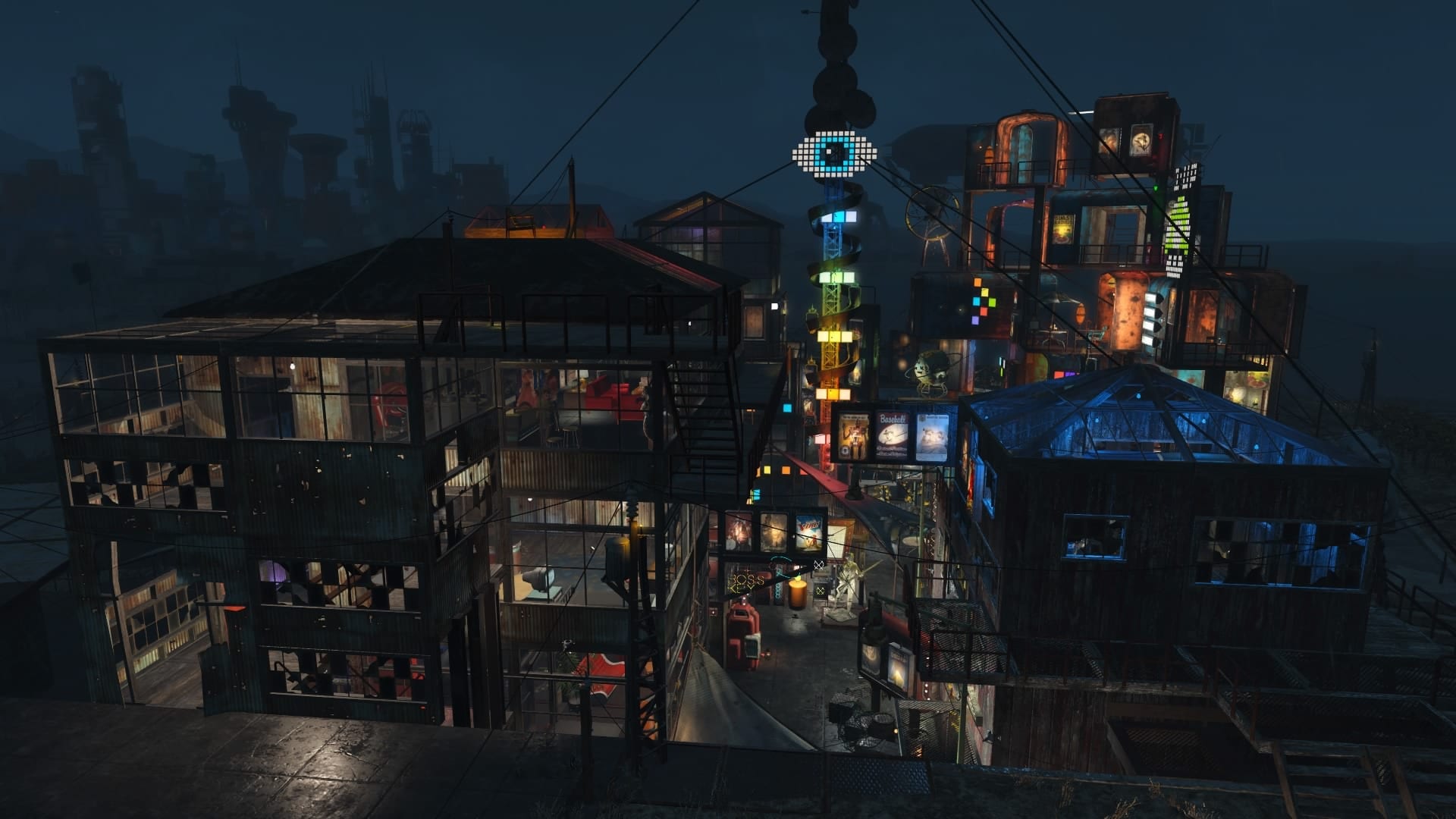 It’s got to be the various multi-floored buildings that make this settlement feel so much more expansive and intricate than it really is. With all of the different levels, there’s just so much to look at at once. It’s a little disorientating at first. 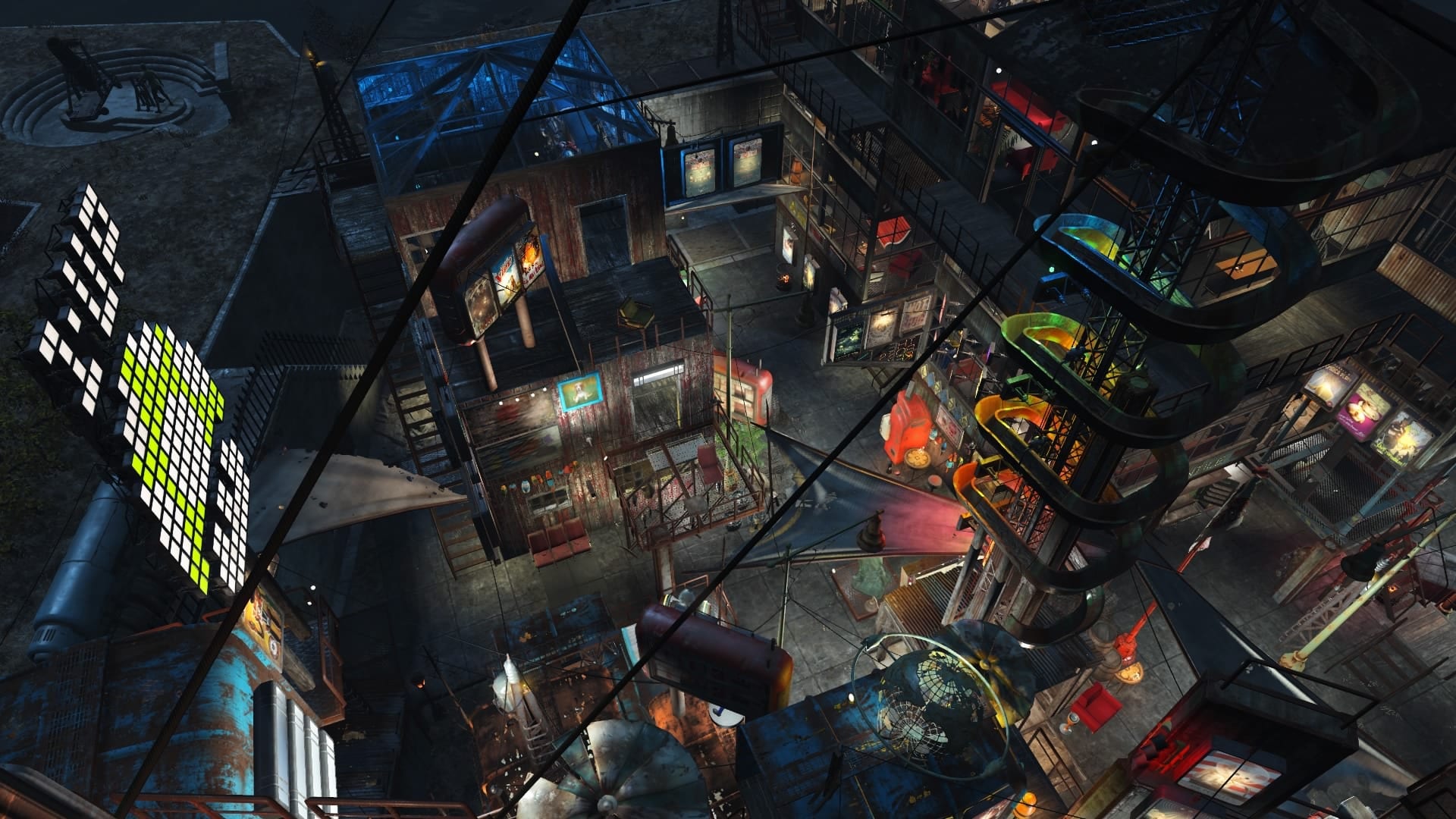 All of the settlements we’ve shown so far have their merits, but I think this one takes the medal for being the most detailed in such a small area.

What are your thoughts on these intricate Fallout settlements? Out of the five we’ve showcased, which is your favorite? Let us know your thoughts!