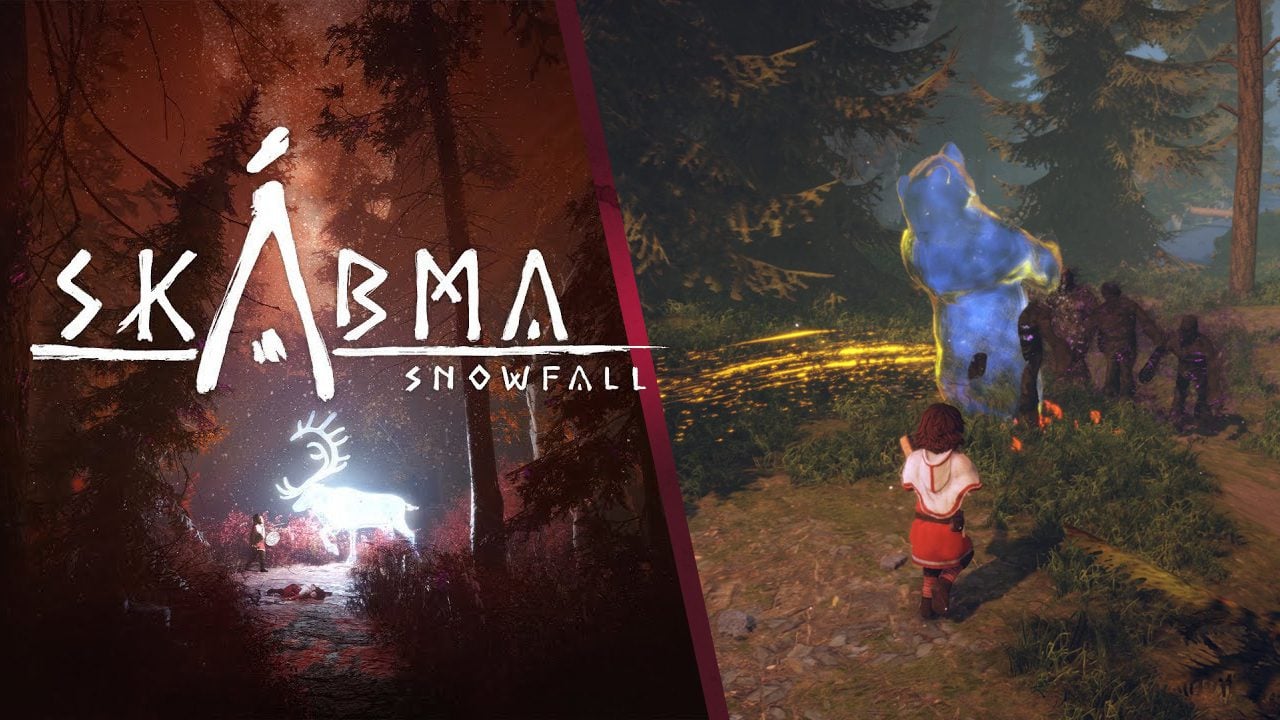 GameByte speaks to the lead developers behind the upcoming Skábma – Snowfall, on its authentic Sámi representation. The game is due to release on PC this Friday.

Skábma – Snowfall is an adventure game that features themes of loss and regain. It’s set in a rural village inhabited by the nomadic Sámi peoples. You play as a young reindeer herder named Áilu, who finds an ancient knowledge that allows him to step into the path of becoming the first Noaidi, seer and a healer, in centuries.

“It’s an emotional and a bit darker story with a trifle of warm-hearted humour,” game director Sahin Cengiz tells GameByte. “Overall: a beautiful story driven adventure game for all players.”

Of course, when designing a game based on an underrepresented culture, it’s important to not only do a substantial amount of research on said culture, but to also involve the right people. The phrase “nothing about us without us” comes to mind here, where all stories like this should include full participation by members of the group the story represents.

“We are talking about a very small indigneous group with under 10,000 people living in Finland,” said writer Marjaana Auranen, who is Sámi. “The one of the two groups I belong to is Aanaar Sámi, with only 1000 members. So the situation is way different than in other minority cultures where some may have near to millions of members. Sadly there are not that many Sámi who have experience of working in games (we are talking about under five people in Finland). But hopefully this will change in the near future.”

In addition to Auranen, other members involved with the game’s development who are Sámi include artists Hildá Länsman and Wimme Saari, with Länsman being the main vocalist for the game’s dialogue too, which is fully voice-acted in real northern Sámi language.

How did you conduct research?

With her experiences of growing up Sámi in Lapland, Auranen credits a lot of Skábma’s setting and lore to the old folklores she heard as a child from her grandmother. However, other historical records were used too. “Other sources have been the old travelogs, studies and memoirs written by explorers and priests in 1500-1800 centuries, with a deep understanding that these logs have been written by people outside of our culture.

“The background research also included reading the newer studies of Sámi belief systems and history written by Sámis to understand the culture’s own perspective towards the earlier studies.

“The game world mirrors the old beliefs of sámi cosmology with the idea of different spirit realms, the Saivu worlds. It is a world where Familiar and Nature spirits were ever-present.”

When designing and developing the story for a game, it’s also important to make sure the themes of the plot intertwines with the gameplay for a consistent experience. In Skábma – Snowfall, your character possesses a drum with magical properties that allows you to see mystical figures and signals that humans cannot otherwise see. It also gives you supernatural abilities, such as the power to control wind, fire, or water that helps you to solve puzzles. This aspect of the game was inspired by the Noaidi belief system and their drums.

Cengiz said of this: “Noaidis were first of all healers and seers so we wanted to respect that in the gameplay also: the player can drum and see what otherwise is invisible. When the disease starts to spread through the land, the player can attune it with the help of Familiar Spirits, but not fight against it.”

Adding onto the question of Sámi representation in the games industry, Cengiz states: “There are two game companies, which we currently know, that are owned or partly owned by Sámi: Red Stage Entertainment in Finland and Miksapix Interactive in Norway. And we are also working together to create more sámi content into games.”

Skábma – Snowfall is due to release later this week on PC. Featuring around five hours of play, the game has spent several years in development and has run into many hurdles along the way. These problems were exacerbated once the COVID-19 pandemic happened, which brought along many issues that caused Red Stage Entertainment to significantly change how development occurred.

“At first it was the same as in every game company: changing partly to work remotely,” Cengiz told GameByte. “We had to change our plans of having the voice-recordings in the Norwegian side of Sámiland to having them in southern Finland.

“We had to be extra careful in order to protect our voice-actors and that way the sámi elders in Sámiland: we ended up postponing recordings over the worst outbursts so that the traveling between Sámiland and Tampere was as safe as possible and that the disease wouldn’t spread with the actors back to north.”

However, like most smaller studios, another problem was the lack of resources and money to continue development: “We have created Skábma over the years with a very small team that was, lucky for us, very passionate about the project. There is a lot of commitment behind this project.”

When it came to pitching the project to publishers, Red Stage Entertainment faced a problem that a lot of underrepresented developers face with their passion projects; the lack of understanding and trust in the game’s themes.

“When pitching the project to publishers and investors it turned out pretty quickly that they thought our game to be too ‘niche’: they loved the idea and the art style, but didn’t trust that the indigneous themes would be something that the players would be interested in. Also some publishers weren’t really understanding the sensitive nature of indigneous themes, asking us to make heavy compromises.

Auranen added that this was also a wider issue with the lack of representation within the industry that it made designing the story somewhat troubling: “Some of the “dont’s” I already knew but it took a lot of long discussions with other Sámi to find out what they felt were important to us to recognize: what were the taboos, and was it alright to challenge them?

“This issue goes back to us being a nation divided by four countries, having nine different languages and multiple groups. What was ok to say or do in my region, wasn’t okay in some other regions. So in a way there are a variety of sámi stories and histories. Stories and customs vary from region to region.”

Things started looking up for Red Stage Entertainment when it finally found a publisher that trusted the developer with the themes and story it wanted to create. “We were so happy when we finally met Plug In Digital who said that they absolutely loved the concept as it is and wanted to be our partner. We wouldn’t want to be on this ride with anyone else.”

It just goes to show how important representation in fiction and entertainment is. It’s not just a case of including a character that belongs to a certain group of people. You’ve got to include that group in your entire development process. You need to think carefully about your research, themes, and logistics to make the experience feel as authentic at possible. If your representation isn’t perfect, it will show through the cracks.

Skábma – Snowfall is will release later this week on PC. Console versions are currently not confirmed. To read more interviews like this, check out our interview with the development team behind 2020’s Raji: An Ancient Epic.

Keep the conversation going by heading over to our Facebook and Twitter pages. You can also find us on Instagram, TikTok, YouTube, Google News and Flipboard. Be sure to also check out our friends over on FragHero and Sporf.

Along with the latest games, merch, and accessories, the GameByte Shop has an epic Loyalty Points Scheme – earning you points for every £1 you spend to redeem for huge discounts. Sign up to hear about exclusive deals, PS5 console drops, and more!