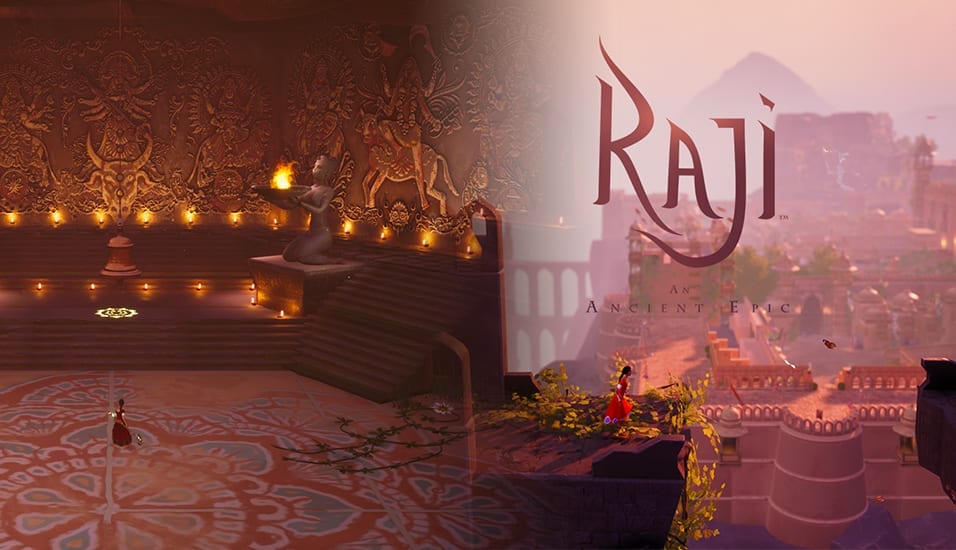 Raji: An Ancient Epic has been a game to watch since its Kickstarter first launched back in November 2017. It’s now three years on and Raji has made its way to Nintendo Switch, with PC, Xbox and PS4 launches coming later this year. A game that prides itself on the spotlight it brings to Indian myths and culture, Raji: An Ancient Epic has already charmed its fans.

GameByte spoke with developer Nodding Heads Games about the launch of Raji: An Ancient Epic, the journey to release and what it’s like to create a game with representation in mind.

“Our will to make a game that can represent the myths, stories and culture from India was one of the reasons the team got together,” the developers explained when asked how Raji came to be. “As gamers ourselves, we’ve rarely witnessed a game set in India. We’re here to make a bold statement, to put India on the game dev map.”

Like many games, Raji’s seed of inspiration was first planted when Nodding Heads’ game designer, Avichal Singh, happened upon a beautiful scene in Jaisalmer, Rajasthan.

“[He] was in awe of the beautiful place called ‘Patwon ki Haveli’, a palace from the early 18th Century. This was New Year’s Eve 2013. The first question he asked himself was, ‘why is this not a video game?'”

It was from here that Nodding Heads Games was eventually founded in 2016, after Singh met fellow developers Shruti Ghosh and Ian Maude at a design college where both of them had joined as art lecturers.

“All three of us had the idea of working together and it was much later in 2016 when we started working on a high level pitch of the game. Shruti had made some early 2D sketches of [it] and these were an instant hit among our close friend circle with reactions of ‘wow,’ ‘I’d totally play this, if it was a game!’

“It was then that we knew we had something special at our hands, we quit our jobs late 2016 and started on our journey.”

There’s more to making a game than just the initial lightbulb moment though, and Raji was no exception. According to Nodding Heads, the title’s many inspirations included the likes of Bastion, Journey, God of War and Prince of Persia. Movies also played a role in shaping what we see in Raji, with the developers citing epics like The Fall, Mulan, Princess Mononoke and Star Wars as just a few inspirations.

Of course, Raji: An Ancient Epic’s main sources of inspiration come straight from Indian, Balinese and Hindu mythology. The team wanted to create a world which explores some of the ancient myths and stories they themselves grew up with, aiming to create a game which brings Indian culture to life.

“We set out on this journey to represent India and tell myths and stories from the Indian subcontinent. It is an integral part of our universe’s conception,” says Nodding Heads.

“The inspiration of the Gods and Goddesses that bless Raji are from Hindu mythology. Hindu and Balinese mythology have a lot of commonalities, hence we thought bringing in the influence of the latter would enrich the universe.

“Our asura clans/bosses are heavily inspired by – and some of them are from – Balinese myths. Our shadow puppets cutscenes draw inspiration from Wayang puppet shows which we thought fit the story telling of our game seamlessly.”

“One of the biggest challenges we faced were financial ones. Being a studio developing PC and console games where the market is predominantly mobile poses difficulties to say the least!

“Most investors did not understand the concept of making a PC game – mostly looked for quick returns and wanted us to finish the game in six months or release it in episodes.

“Even though we had a solid demo to back our pitch, most big publishers who did show interest backed out because we were an untested team, and India being known as an outsourcing hub meant we got turned down.”

Along with financial struggles, the team also suffered due to the studio’s location in Pune, India.

“Getting development kits in India is a whole new ball game,” Nodding Heads told us. “Our Switch dev kit was stuck in customs for almost two months, after a lot of back and forth and plenty of emails, we did manage to get it!”

Indie games are often recognised for being ahead of traditional AAA gaming when it comes to their content and subject matter. While big publishers are more than happy to stick to the tried-and-tested formulas of American heroes with flashy guns, it’s in indie games where you’re more likely to find the realistic representation and diversity that gaming sorely needs. Raji: An Ancient Epic is a shining example of what gaming can – and should – be for marginalised and underrepresented groups.

“We always understood early on, the change Raji will bring to the video games industry,” Nodding Heads says. “It was not only a game on Ancient India but also made by a team which is majority Indian as well.

“We are glad people are identifying with Raji, its universe and stories. More often than not, you will not see games representing lesser explored cultures, main characters who look and talk like us.

“We think the industry is becoming more inclusive, welcoming more new unexplored stories from other cultures. Someday it would be amazing to play rich stories based on African culture or [indigenous people of] Australia.”

2020 has been an exciting year for the team at Nodding Heads Games, and for all the people who’ve supported Raji: An Ancient Epic from its Kickstarter days until now.

“We are really grateful, and humbled by every message and review coming our way,” said the developers. “We have worked extremely hard to secure the future of Raji and for an indie team based out of India to release through Nintendo’s Indie Game World is an enormous achievement.

“On the day of release some of the team members were rather emotional to say the least! We are relieved and happy to have such an opportunity to release Raji and the positive feedback we have been receiving.”

The future of Nodding Heads Games couldn’t look any brighter, but what’s coming next?

“Right now we’re focusing on the release on October 15th, which is for PS4, Xbox One and PC. After that we are in for a long and well deserved break! We have been working extremely hard throughout this year and none of us have taken [time] off. Once we have our vacation, we shall plan the future!”

Raji: An Ancient Epic is available now on Nintendo Switch, coming to PC, Xbox One and PlayStation 4, October 11. Wishlist it ahead of its wider release on Steam right here!