The good old LAN party – an alternative to the normal kind of party, perfect for those too cool to go to parties whose primary goal was to get drunk…and those not cool enough to be invited. If you’ve been a gamer long enough, you’ve probably been to a LAN party before – they hail from the days before (forced) online multiplayer was a thing, and we do miss them sometimes.

One thing is clear: The concept of them is dying. And why not? With practically every other game having a multiplayer mode, there is no need to hang out at a buddies any more, when you can just as easily play together from home – without having to wear pants, and without having to share your pizza and beer. 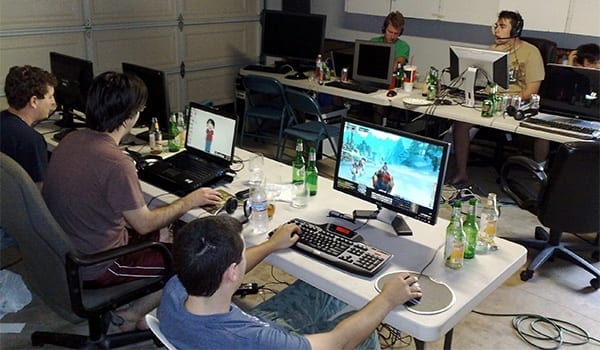 Well, we don’t like it. It was a great way to actually, physically hang out with friends, to ignore curfews and bed times, and later on to slowly get drunk over a long weekend. In addition to just playing the games, you got to see your friends reaction to playing – the joy of finally getting that camper (that’s right, we see you Joey!), the upset of being stabbed in the back by your other friend (you had it coming Joey), and so on.

If you’re a frequent victim of lag, you probably remember these parties fondly too – for those too young to know, when you connected your PCs directly, there would be no network lag. Outrageous, we know. Games back then were easy to pick up and play, and it wasn’t a big deal if one of your friends hadn’t played a game before. With no Steam to track your played hours that also means that you got to boast how many hundred hours you’d played on that one game you barely looked at since you got it…but we digress. 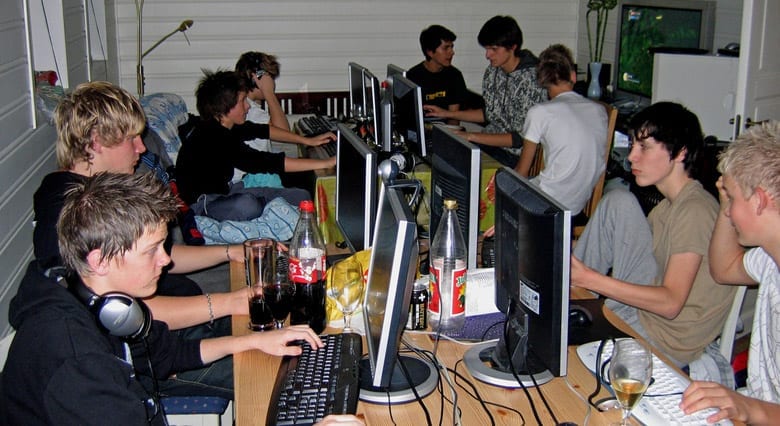 Pre-Steam there were other benefits to these parties too. Many games offered LAN multiplayer modes, meaning that you could easily play with a whole group of people with only one or two copies of the game. Now, with matchmaking servers, progression systems etc., that’s just not really an option any more.

To be entirely fair, there are still some games left that have the option – CS:GO for example. You need to use console commands, but it can be done – yet, one game isn’t enough for this type of party – they’d often last for whole weekends with very little sleep, and none of that pesky ‘sunlight’ our mums would always go on about.

Now it’s all different – instead of skill-based games, we have equipment-based ones, or ones that are a mix, and that’s not even counting the pay2win types. It’s quite frustrating to join a Call of Duty match as a new player when some of your friends have everything unlocked, and another two have never played a CoD game in their life. Back in the day, it was pure skill, and they were pretty transferable between many games within a genre.

Games have come a long way since then, so this isn’t necessarily true – someone who is excellent at CS:GO might do terribly in CoD WW2 and vice versa – the principle is the same but the execution quite different.

What does that mean for LAN parties now?

Nothing good – instead of ‘proper’ LAN parties, the far more likely scenario is that of a mock version of it – friends assemble in the same room, but play online games. There is nothing wrong with that per se, but for those of us lucky enough to live through the era of LAN, it feels like a little bit of a loss. If you really want to experience one but not actually host one, there are still places that do them – often, esports events and the like will have something akin to an old-timey LAN party. It won’t be just a couple of people though – it’ll be hundreds, maybe even thousands.

If you’re lucky, you might have enough equally-nostalgic friends to get one last proper one together – playing those old games one last time. That is, if they are compatible with your machines now or can be successfully emulated at least, and if you still have the energy and strength to stay up playing for 12 hours straight. Don’t be fooled by your memories, that can be tougher on the body than you think.

Does that mean you shouldn’t do it?

No absolutely not. Go do it right now if you can – organise a weekend LAN party one last time for old times’ sake. Just pick a room big enough for everyone to sit in. Taping a guy to the ceiling isn’t that funny in real life.