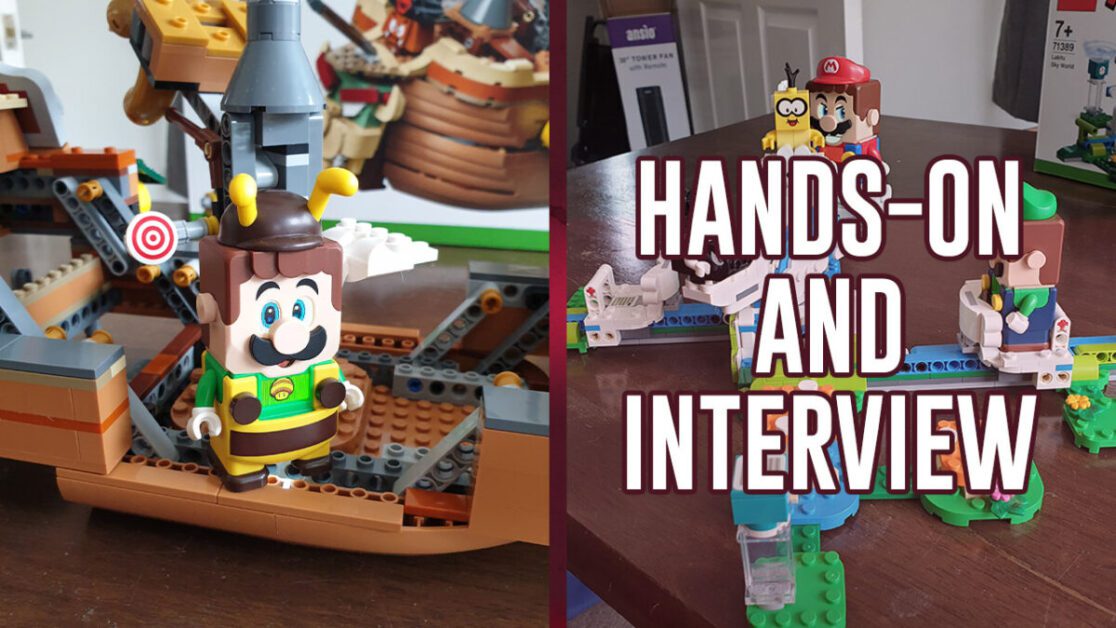 For people all over the world, Super Mario and LEGO were two brands that defined their childhood.

Personally, some of my happiest childhood memories were spent playing Mario games with my mum and sister. We would draw the curtains and boot up a copy of Mario Kart Wii, grasping those cheap plastic wheels tightly. I would always laugh when my mum fell off the sides of Rainbow Road. My sister would always scream the house down if she didn’t come first. In the era of handheld, I would stay up past my bedtime exploring the Mushroom Kingdom. I was enthralled with the colourful world of Mario, with the light of my DS screen glowing from beneath the covers, giving away my late-night antics.

I have dear friends who adorn their shelves with the most beautiful and complicated LEGO builds I’ve ever seen. Their voices are rushed and I can hear the smiles lilting on their words. Even if their wallets may not share that same glee at times.

For many of us, this love of Mario and Lego has continued as we’ve grown. I was lucky enough to receive the new LEGO Super Mario sets ahead of their launch on August 1st (today!). These are Adventures with Luigi, Bowser’s Airship and Lakitu’s Sky World. I sat down with Benjamin Ma, the Senior Digital Play Designer to discuss the past, the present and the future of this wonderful amalgamation of our childhood memories.

An Explanation of the LEGO Super Mario: Adventures with Luigi Set

First of all, you might be asking yourself “what exactly ARE these LEGO Super Mario sets?”.

With all the true creative freedom you might expect, LEGO Super Mario allows players to design, build and play their own Mario levels. The figures read and react to enemies and pipes, including sound effects and earning coins. The goal is to earn as many coins as possible by completing these custom courses. This modular LEGO playset can be rearranged and combined with Expansion Sets to create totally unique levels. The free LEGO Super Mario app also offers fun ways to enhance play by suggesting designs using sets you have.

In the LEGO Super Mario: Adventures with Luigi set, you can team up with (or, depending on how you’re feeling, go against) a friend or family member. Two-player interactive play means that more people than ever can get in on the fun.

I mentioned earlier that some of my most beloved friends have these gorgeous LEGO sets on display. I asked Benjamin Ma how much the shelf appeal factor into the process of designing these brand new kits:

“Working with Nintendo on these kinds of sets, the play is usually the first thing that we really think about. But, of course, this is also LEGO Super Mario. So it has to have the iconic things from the various sets, and so on. It’s very much a balance that keeps going back and forth, and it also depends on the individual model designers who work on them. But obviously something like the Bowers Airship, with being able to fold up and everything, one consideration there was being able to look really good on the shelf

In general, we want all of our sets to look cool even from a distance, but also super playable as well.”

The passion the whole team has for these two brands can be felt in every brick. Each set has been crafted with such care and precision. Speaking with Benjamin, I was more certain than ever. I knew there had to be an answer to my next question.

Favourite LEGO Set of All Time?

“It’s usually something from your childhood, that’s the nostalgic one, right? I remember receiving the Lego Studios set. My brother and I both got it, it wasn’t mine alone, with a little camera and you could shoot videos with that camera using your Lego set. We spent a lot of time doing that. That’s a really fond memory of mine”.

On the Flip Side – Favourite Mario Game?

A pause. We both knew what was coming next.

“I have to take my CAP off for Odyssey.”

Terrible puns aside, Benjamin clearly cares for the Mario universe. I asked if he could spill the beans on any future LEGO Super Mario sets he’d like to design.

“We can’t, of course, talk about what will happen in the future. But there’s not a lack of inspiration to draw from. We’re all, in the team, huge Super Mario fans. Everyone has their own favourite games, favourite universes, favourite levels, favourite moments, favourite enemies. That universe is so abundant. We’re not going to run out of ideas.”

I mentioned it above, but each set has the option to change and modify the play path. I asked Benjamin whether it was difficult to find a balance between a linear progression and the creative freedom we loved in the sets.

“The expansion sets are all very modular, allowing you to build your own courses and it’s very intentional that way. The core of it is that you have the start tube and the finish flag – everything you put in between in a level. We want kids to be able to build something really fast but still looks really good. And of course means that the models are built out of smaller modules, that you can easily move around and those modules themselves should look good.”

“It’s all about being very modular in the builds”

What Does The Design Process Look Like When Considering Two Different Play Styles For One Set?

“For the first year of LEGO Super Mario, which launched almost a year ago, we had to learn a lot about how to do the basics of building these kinds of levels for the first wave of products. And in our testing and the years leading up to the launch, we learnt a lot about what really got kids creative and what kind of modules brought the most amount of play but also modularity and moving around. And we got really good at it then.”

It certainly couldn’t have been easy to come up with such an ingenious product, but Benjamin and the teams at LEGO and Nintendo have done an excellent job. He continued:

“Come our second wave we did more things and kept expanding on that, but for this new set of products with LM and LL we had a completely new challenge which was that we had to make things that weren’t just fun and playable for one person, but also for two people, who could play together. And that was like a completely new set of challenges that we had to learn about and how to design sets around. I think for this new set of products that was the new big design challenge that we took on.”

What Were Those Limitations ON Designing LEGO Super Mario For Two People?

“I think the biggest challenge was not only designing for two people, because we come up with these cool play ideas, but if you’re playing by yourself all of a sudden it’s like “oh you can’t do all of these things” and that won’t, of course, won’t do,  because you should be able to play by yourself as well.”

When playing with these sets, that is certainly one thing I noticed. Whether I had my Player Two by my side, or just wanted to lock myself away and play by myself, these sets effortlessly blended the two. He continued:

“Making sure that we made challenges that were good for one and two players was something that was tricky early on. Now that we’ve tried it out we have loads of ideas all of a sudden, and all of these things get easier over time.”

Talking of two-player, the most important question I had…

As a Luigi girl myself, this was the right answer. Luigi has such an iconic design, moving out of the shadow of his brother in recent years. Both the Mario Bros and LEGO have classic designs. I knew it must have been important to blend the two styles, which both teams have indeed done seamlessly.

But I wondered – did the team feel any pressure about the LEGO Super Mario design? Benjamin says that “It was us and Nintendo working together to bring these two big things together – LEGO and Super Mario – and making something that felt unique to those two as well. It did take some time to find the style but I think once we found it it totally clicked. Both sides being happy, i think we felt very confident with what we had in the end”

“How creative we enable kids to be, that’s really amazing”

One thing that many gamers will no doubt know – LEGO and Super Mario fans are fervent in their love for these franchises. Fan feedback is really important for developing games. I asked if he had the chance to speak to anybody about the design process. He told me that they had been working on the first LEGO Super Mario for four years at its release a year ago, in total secrecy. This meant the team couldn’t listen to the fans or anything like that with the first set.

But the main fans they could rely on were the people internally at LEGO and Nintendo, who are also huge fans of the brands. This shines through in their work in every block, because, of course, LEGO and Nintendo aren’t just for kids. But it’s fair to say that younger people are the target audience of this set. Benjamin told me a bit about how involved kids had been in their market research.

“The main thing we did was test a lot with kids. We did a lot of research, we did a lot of kids testing. Of course, the kids had to keep a secret and they did, which was amazing, so we could surprise the world when all of this came out. But we’ve tested with hundreds of kids to make sure that this was something that felt right for them”.

One thing that struck me was how much pride Benjamin had when talking about the way that kids interacted with the LEGO Super Mario sets.

“How creative we enable kids to be, that’s really amazing”. Seeing the joy that we hoped to spark in kids that we’ve seen in all of these tests, finally when you let it loose. You hope that everything that your research and testing has led to is true. That was really rewarding to see when it finally came out.”