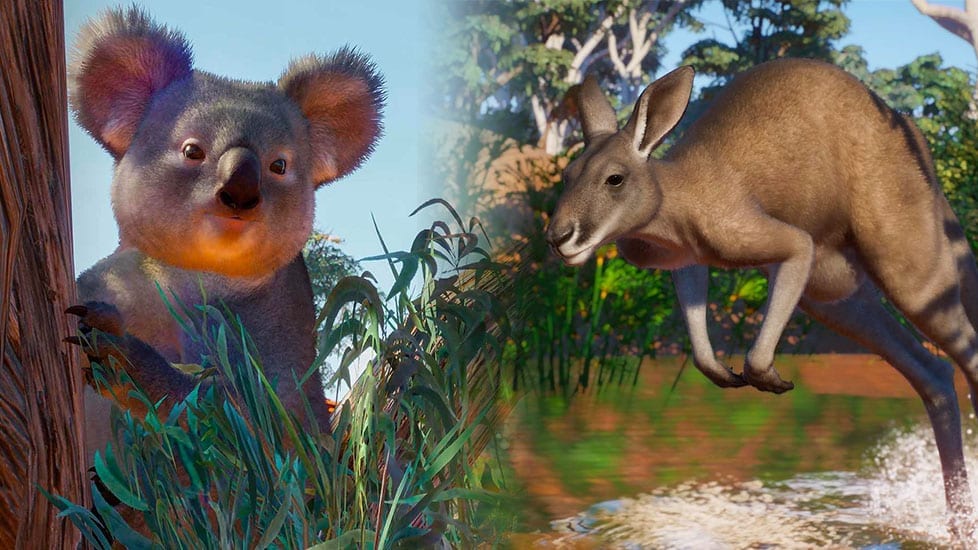 The world of Planet Zoo is getting bigger and better thanks to its latest game pack, which brings the beauty of Australia right to your home. The Australia Pack will introduce you to brand-new environments, new scenery pieces, a host of construction items and – of course – some of the most highly-requested animals since Planet Zoo’s launch in 2019.

Curious to meet the cute, the cuddly, and the cassowary? Here’s a deep look at the new critters heading to your game courtesy of Planet Zoo’s Australia Pack.

The southern cassowary may look cute, but don’t be deceived by these big flightless birds. They’re actually pretty dangerous, and have a reputation for being aggressive to both other animals and humans. The southern cassowary might have a short fuse when you add one to your zoo, so keep your fingers out of its sight at all times (and maybe keep it away from your other animals too…)

Making their habitats either in tropical rainforests or deep in savannah forests, you’ll need to make use of all of the pack’s new items if you want to make your cassowary feel at home.

Related to both the emu and the kiwi bird, cassowaries aren’t just found in Australia, though that’s the place they’re most commonly associated with. The birds are most likely to be found in the northeast of the continent, making them the perfect choice for Planet Zoo’s Australia Pack.

Their name comes from their distinctive blue tongues, which can vary in shade and hue. Disturb an eastern blue-tongued lizard mid-nap and you might get to see it when they hiss at you!

These keen-eyed creatures tend to make wonderful pets (if you’re a fan of scales, of course), and they’ll make the perfect addition to your Planet Zoo build. Keep them in their natural habitat of woodland and grassland, but they’ll also thrive in more urban settings. Adaptable, unique and filled with charm, the eastern blue-tongued lizard will soon become your new favourite Planet Zoo creature!

One of the most iconic Australian animals, the dingo has raced to the forefront of the Planet Zoo Australia Pack, and he’s bringing a pack of his own. These beloved wild dogs are built with speed, agility and stamina, and they’ll settle right into your zoo.

These legendary canines are thought to be descendants of Asian dingoes, which were first introduced to Australia over 3000 years ago. With a deep-rooted Australian history, it’s hard to imagine leaving them out of this Pack!

The dingo is nothing if not adaptable, and will feel right at home in both the rainforest and the desert, giving you lots of choice when it comes to placing them within your build.

Dingoes will feast on a variety of small mammals, but they’re also ready to take on animals as large as the red kangaroo, so you might want to keep them far away from the next new addition to Planet Zoo…

One of the most recognisable animals of all time, the red kangaroo is finally jumping into Planet Zoo and he’s sure to make an impact in your game. These beloved marsupials hardly need an introduction as they’re one of the Planet Zoo community’s most-wanted additions, and more than enough reason to invest in the new Pack solely on their own merit.

The tallest of the kangaroo family, the red kangaroo can clear nearly six feet tall, with incredible strength that you definitely don’t want to be on the receiving end of.

These fuzzy friends are found all across Australia, though the continent’s most fertile areas might be a turn-off for the species. Use Planet Zoo’s new building and cosmetic items to craft the perfect habitat for your kangaroos – just make sure it’s not too damp!

Last but definitely not least, the koala is the final new animal headed to Planet Zoo’s Australia Pack. Again one of Australia’s most iconic heroes, the koala is synonymous with all things Australia, and is as cute as he is anti-social. These animals devote just 15 minutes a day to social activities, so don’t expect them to be the life and soul of your zoo! You’re more likely to catch them sleeping or eating than making friends (something we can all relate to!)

Koalas can range in colour, ranging from silver to chocolate brown, so expect lots of variety when you move them into their habitat. They prefer – of course – the cool shade of the eucalyptus tree, which serves as both a habitat and a food source.

After a koala gives birth, the mother will carry her young in her pouch, something that the koala and the kangaroo have in common. It’s impossible to hate these nap-loving shy guys, so make sure you get them into your zoo ASAP!

Along with its five brand-new friends, Planet Zoo’s Australia Pack also welcomes a whole host of exciting new build items for you to ensure you’re creating the best habitats possible for your new additions.

The Pack closely follows indiginious Australian art styles for all its new items and scenery pieces, giving you the chance to build out your ideal Australian-inspired zoo areas. With a new colour palette of rich reds, earthy mustards and rainforest greens, the Australia Pack has everything you need to unleash your wild side.

New build items don’t just share a new colour scheme though, as they also have a wonderfully worn aesthetic which reflects the culture of upcycling and reusing to help the environment.

Whether you’re looking for new animals to care for or if you’re looking to style out your zoo, Planet Zoo’s Australia Pack promises to pack a real punch. As one of the most detailed and fun management sims out there, Planet Zoo is only getting better and better as you work to create your ideal zoo. Care for the animals throughout their entire life cycle, build their enclosures, educate and delight your guests and turn a profit as you construct the perfect zoo!

Planet Zoo Australia Pack releases for PC on August 25, costing £7.99. Note, you’ll need to have the base game installed to play the new DLC.

Part of a paid partnership with Frontier Developments.