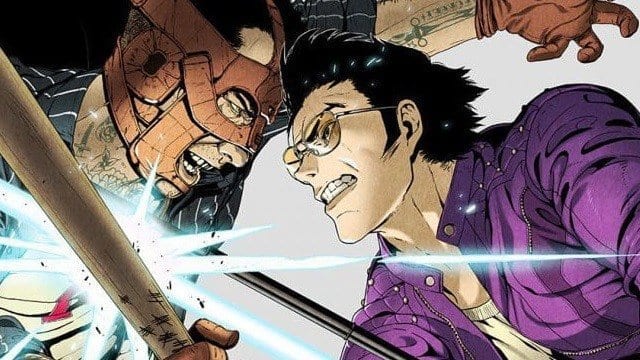 Goichi Suda, better known as SUDA51, is undoubtedly one of the zaniest, wackiest and funniest game creators in the industry. From the joys of No More Heroes and Lollipop Chainsaw, to the grit of Killer 7 and Shadow of the Damned, SUDA51 and Grasshopper Manufacture know how to make a stand-out game.

With No More Heroes: Travis Strikes Again landing on the Nintendo Switch earlier this year, a PC and PS4 version due to launch in just a few weeks’ time, and No More Heroes 3 having just been announced, it’s never been a more exciting time to be a SUDA51 fan.

GameByte got the opportunity to sit down and chat with the man himself during Gamescom 2019, where we talked everything from game development to Rocky 3.

Travis Strikes Again is, right now, only available on Nintendo Switch, but PlayStation 4 and PC gamers will get to enjoy it later this year.

“I’m here today talking about Travis Strikes Again: Special Edition,” says SUDA. “Which is out on October 17th, and is a new release for both the PlayStation 4 and the PC. The game is already out on Switch, but for those of you who do not have a Switch, you can get it on the PS4 and PC.”

If you’ve already played through TSA (which you should have done by now) then you’re going to be pleased to learn that some of the elements introduced in the spin-off game will be brought into the recently-announced No More Heroes 3 when it comes out.

“As you can probably see in the poster I have here, in Travis Strikes Again, Travis used something called the DeathGlove, which allowed him to kind of access power in this system called the DeathDrive,” explains SUDA. “And he was able to equip skills there and kind of use skills in the game and this entire system, we’re going to bring it to NMH3.”

No More Heroes 3 might not yet have a release date, but SUDA explains the game is roughly around “50% done,” with the team primarily “focusing really hard and just making a really great game,” instead of worrying about timescales.

For fans of the NMH franchise, the recent return of the ever-iconic Travis Touchdown comes as more than a little surprising, especially since SUDA has previously stated that the character’s story had already come to an end.

“At the end of [NMH 2: Desperate Struggle], I kind of brought the story of Travis Touchdown to a close at that point. That was kind of how I wrote it, but every time since then, every time a new Nintendo console came out, I kind of looked at it like ‘Wow, this would be a really cool system for Travis to be in! It’d be really cool to bring him back for that.’

“Within me, I always thought it would be cool to write another scenario for Travis Touchdown again, maybe as NMH3 or another part of the series. So it’s something that both the fans wanted and I thought about it a lot. When Nintendo Switch came out, until then, I was looking around thinking ‘It’s not good timing for me to do it.’ But then I saw the Switch and said ‘Oh! Intuitively, this is just the perfect timing for me to create a new Travis Touchdown, a new NMH game.'”

No More Heroes and Nintendo go together like peanut butter and jelly, and there are few franchises I can think of that can make use of the big N’s motion controls like NMH. Really, it’s a perfect fit for the Switch, but how did that come about?

“When I was developing for the Wii controller I was thinking like ‘what is the best thing I could do? What is the most interesting thing I can do with this system? How can I fully extract the value of this mechanic and this kind of thing into my games?'” SUDA explains.

It’s not just the Joy-Cons that make the Switch an appealing platform for developers, SUDA tells us, explaining just how accessible the console is for both the production teams and the players.

“In terms of the development itself, we’ve been using Unreal Engine 4 for a while. The fact that you can develop on the Switch with that does make the development for the Switch quite easy. In that sense, it’s a really great title for that sort of ease and familiarity that we have with that.

“Also on the Switch there’s all sorts of different titles that are currently available. There’s AAA, really beautiful, high-quality insanely well-produced titles. Then there’s things that are a lot more – very Indie, the graphics aren’t really the main focus of them, they have all sorts of interesting and cool innovations, but there’s a big range of games that you can find on the Switch.

“I think in that sense it’s a very kind of Nintendo sort of system, with all sorts of available types of play for you. Additionally, there’s also the Joy-Cons, which are a very Nintendo kind of innovation that they use and Nintendo’s always coming up with these very innovative, interesting kind of mechanics and systems for their systems. And I feel like that’s almost like a challenge issued to the developers like ‘make something that fits our system! Make something that’s worth all these cool things that we’re creating.’

“And I think No More Heroes and Travis himself are a very perfect fit for the Nintendo Switch system.”

The No More Heroes series is notorious for its mini-games, which classically took the form of part-time jobs. Whether you loved or hated the mechanic, we can definitely expect it – or at least something similar – in the third addition to the franchise.

“One thing that really surprised me was that the fans for my games, they really remember the [part-time jobs in the original title] so there was a lot of fan feedback about how much they liked those kind of part-time jobs that Travis did,” says SUDA.

“There aren’t that many games where you can kind of play these stupid little silly side games, so I definitely want to make sure to include that sort of thing in NMH3…Right now there’s no specifics I can give you, sorry.”

When it comes to the remakes and remasters we’ve been seeing so much of in the industry recently, I just have to know if we can expect a return for any other of SUDA’s games.

“Regarding Shadows of the Damned, [two of the characters] in some sense of form might live on in other games, but generally, what we try to do is to constantly create new IPs and do new challenges,” SUDA says.

“But at the same time we also like listening to fan voices, which we’ve mentioned before, and the loudest voices that we hear are generally for Lollipop Chainsaw. That’s something that we seem to hear a lot of people wanting to see more of. Whether or not that is the original game being released on a new platform, or whether it is a sequel, that’s something that a lot of people seem to want, and we think would be kind of cool to do.

“Yeah I would like to make a new one, but it would be a really hard thing to do. First of all, the IP is owned in cooperation with Warner and Kadokawa [Games] so obviously I’d have to get their okays before I did anything like that.

“But, yeah, if I could work again with James [Gunn] and do a co-operation and create a new Lollipop Chainsaw, I think that would be a lot of fun!”

We couldn’t let SUDA go without asking him to sum up the upcoming No More Heroes 3 in just three words. His response?

“Three words…hm. These are more three concepts, but: Thanos-level enemies would be number one, full armour would be number two, and for three…okay, I can’t say that. What do I talk about? Rocky 3! Let’s go with Rocky 3.”