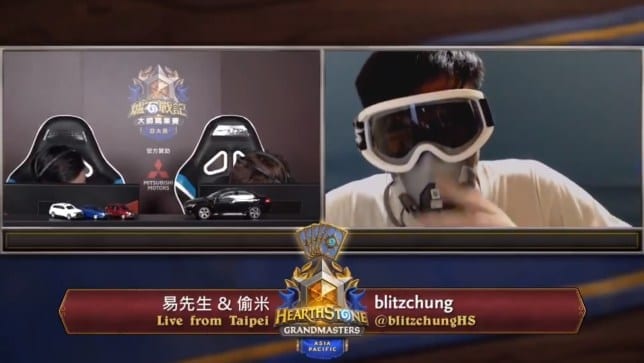 Blitzchung, a competitor in the Hearthstone Asia Pacific Grandmasters tournament, spoke about the political issues at the end of a livestream, donning a mask and sharing his support.

He reportedly said: “Liberate Hong Kong. Revolution of our age!”

Along with losing his place in the Grandmasters and his winnings, the gamer has also been banned from Hearthstone esports for 12 months.

Blizzard’s response comes from the desire to remain inoffensive to mainland China’s players and government.

During the pro player’s statements, it’s reported that the people in charge of the stream hid under a table because of the controversial words.

Blizzard Taiwan has now removed the pro player from the tournament – and will be withholding the player’s prize money. The company has deemed his actions to be a violation of the competition’s rule about bringing “public disrepute” and “offending a portion or group of the public, or otherwise damaging Blizzard’s image.”

In a statement, Blizzard said: “While we stand by one’s right to express individual thoughts and opinions, players and other participants that elect to participate in our esports competitions must abide by the official competition rules.”

Over on Twitter, the official statement also adds: “Grandmasters is the highest tier of Hearthstone esports and we take tournament rule violations very seriously. After an investigation, we are taking the necessary actions to prevent similar incidents from happening in the future.

“…We’d like to re-emphasize tournament and player conduction within the Hearthstone esports community from both players and talents. While we stand by one’s right to express individual thoughts and opinions, players and other participants that elect to participate in our esports competitions must abide by the official competition rules.”