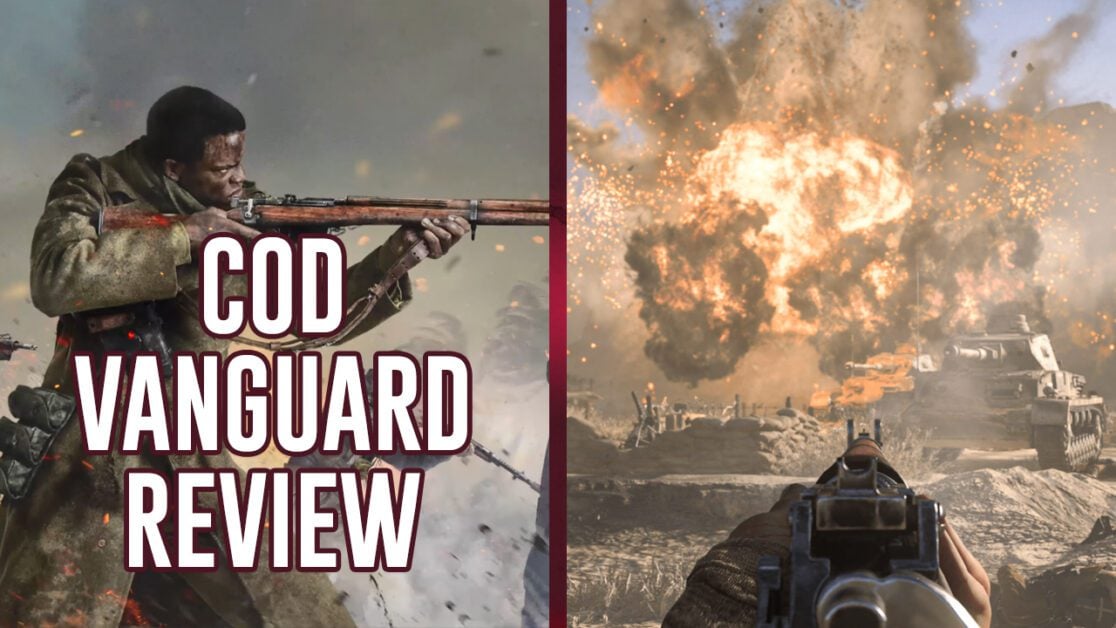 Another year, another Call of Duty entry. Vanguard takes us back in time once again to where the series all began – World War II. While much of Vanguard’s DNA is borrowed from 2019’s Modern Warfare, it’s far from to its detriment. The single player campaign is surprisingly intriguing, multiplayer is as solid as ever and Treyarch continues to impress with its Zombies offering. It’s just a shame that the team’s hard work is overshadowed by the troublesome goings on at publisher Activision Blizzard.

Call of Duty Vanguard’s campaign tells the story of the world’s first special forces unit. The short and sweet narrative follows four specialists of different nationalities, all of which are given ample opportunity to breathe. All of the characters are explored through the medium of flashbacks with only the introductory and closing missions depicting the team as a whole.

Let’s walk through the ensemble cast – first up is Arthur Kinglsey, the leader of the group. Handpicked as a standout soldier from his efforts behind enemy lines on D-Day, he has an active ability that lets him command outgoing team fire.

Then there’s Polina Petrova, a Soviet sniper and medic. She’s incredibly nimble, can climb up vertical surfaces and move quickly while crouched. Petrova can also hold up a knife to bait out enemy fire, so she’s excellent for stealth.

Lucas Riggs is the Aussie counterpart of this ragtag team. Fighting in the African theatre of war, he’s a demolitions expert – a dab hand at blowing stuff up. He doesn’t have an active ability, per se. Instead, he’s known for his incredibly deep pockets. Riggs is capable of holding up to four different explosive types, giving him plenty of firepower.

Last up is Wade Jackson who’s easily the most forgettable of the bunch. The American pilot has a memorable dogfighting mission in the battle of Midway, but his ability is especially generic in his other missions. He can enter a ‘focus’ mode which allows him to see enemies through walls. Aiming down sights and holding the trigger quickly flicks between enemies. It’s fun to pull off, but extremely bland from a gameplay perspective.

All of the characters are based upon real world soldiers that fought in World War II. It brings a distinct human element to the campaign. Although the details are almost certainly embellished, it certainly instigates a curiosity in the time period and the real people involved. If you’d like to learn more about the real world stories behind Vanguard’s protagonists, we’ve got you covered.

Each of the flashback missions allow the campaign to flit around the world, exploring plenty of different theatres of war. That comes with some decent gameplay variety with each character lending themselves uniquely to each mission situation. There’s nothing groundbreaking here, but it’s a fun five-hour romp that’s a decent addendum to the rest of the game. A story tease at the end neatly links Vanguard into the rest of the Call of Duty series, so it’ll be interesting to see if Activision capitalises on this with the live season moving forward.

Let’s get to the meat of what everyone buys Call of Duty for – the multiplayer. Like the campaign, you know what you’re getting into with Vanguard’s offering here. The fast paced gameplay returns with 20 vibrant maps to explore and a plethora of weapons to unlock.

With Call of Duty Vanguard opting for a historical setting, there’s always the worry that the weapons won’t feel as punchy as their modern day counterparts. Thankfully, Sledgehammer has done plenty of heavy lifting to make the weapons feel snappy and genuinely fun to use. It didn’t take many matches before seeing each weapon level up pulled me right back into the grind mindset.

The 20 maps are all distinct in their own right, too. Like the campaign, they jump around the globe depicting plenty of iconic locations from throughout the war. Some of them use the tried and tested three-lane layout while others opt for their own approach. It’s a good blend of familiarity with just enough new ideas to keep things fresh. There’s also a couple of familiar settings from World at War that long term fans will enjoy immensely.

Something else that keeps things fresh is the new Combat Pacing. This gives players a chance to tailor gameplay to their personal preference. Three settings change how many players participate in each map ranging from a ‘Tactical’ to a ‘Blitz’ variation. At first glance, this seems like a mere playlist addition. In practice, it actually makes each match feel distinctly different and offers a welcome change of pace.

The new Patrol and Champions Hill modes are neat additions to add even more variation to the tried and tested formula. Champions Hill especially straddles the gap between Warzone, introducing a loot-based experience to the multiplayer. Patrol feels more like a typical Call of Duty mode. A clear objective keeps the action moving around the map, so it’s great for getting used to the new locales on offer.

After several hours (and several losses), Vanguard multiplayer remains the most fun element of the three modes. All it had to do was make the World War II era feel modern enough to play, and it pulls that off fantastically. I’d happily keep playing this version of multiplayer for the next year to come.

Last up in Vanguard’s trio of offerings is Zombies. Treyarch is leading the charge on this one to continue the Dark Aether story from Cold War. Where Zombies was once a relatively open-ended affair, this one is far more focused in its approach. Tracked mission objectives give new players far more direction, and the extraction mechanic returns from Cold War to provide a definitive end to each run.

At the moment, the experience is fairly barebones. Don’t get me wrong, mowing through hordes of zombies is as fun as it has ever been. However, the actual narrative element isn’t arriving until the new season begins on December 2nd. The month gap is disappointing for fans looking to get stuck in on day one and makes it hard to recommend if you’re looking to make Zombies your mainstay mode.

Is Call of dUty: Vanguard worth your time?

Overall, Call of Duty: Vanguard is another solid entry to the CoD series. Sledgehammer has worked almost entirely by the rulebook, but has made enough improvements to deliver a template that can carry the series forward for another year. There’s a promising lineup of post launch content on the way too, leaving the future looking relatively bright for the future of Call of Duty.

However, it’s a massive shame that the series is overshadowed by the goings on at publisher Activision Blizzard. The company is currently embroiled in a lawsuit from the state of California after mistreating its employees on a huge scale.

Code was sent to GameByte by Activision PR for review purposes.