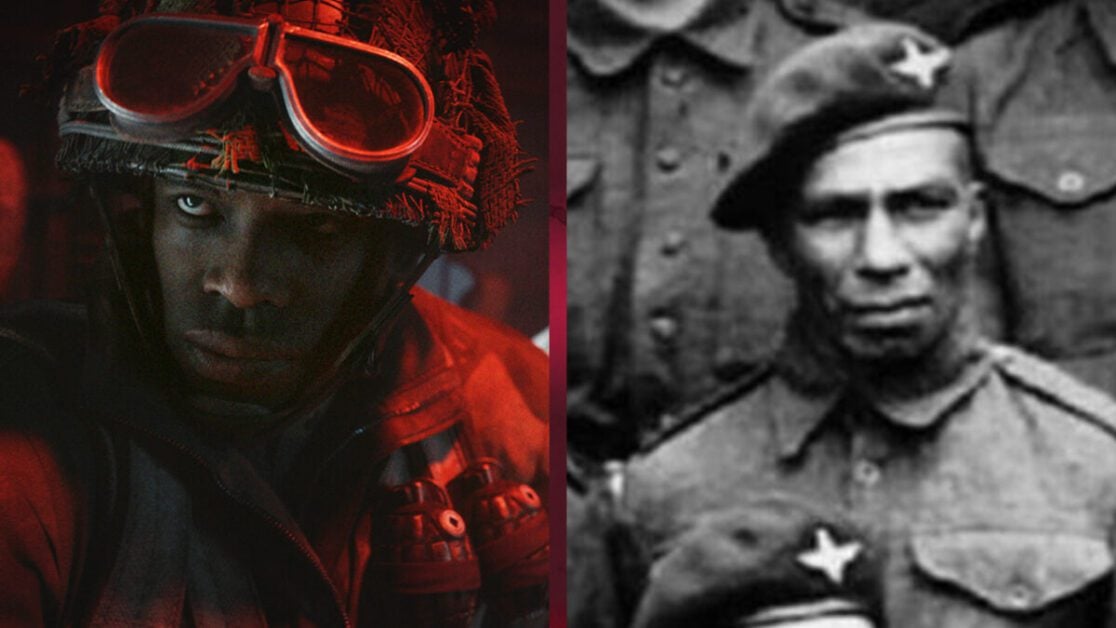 Call of Duty Vanguard takes the series back to its roots with a familiar World War II setting and lots of historical inspiration. Developed by Sledgehammer Games, the campaign takes place on the global stage this time, spanning several theatres of war.

Vanguard promises to tell the story of the very first Special Forces unit. Made up of four unique soldiers from the different Allied countries, it’ll follow the unit as they attempt to take down the Gestapo at the end of the war. While Vanguard is rooted in history, the events aren’t factually accurate to what actually happened in WW2. With that said, Sledgehammer did take some real life inspiration for its four protagonists.

Meet the real soldiers that inspired the four protagonists of Call of Duty Vanguard’s Campaign.

Sgt. Arthur Kingsley serves as the leader of this rag tag Special Forces Unit. It’s his perspective that we can see in the Vanguard gameplay trailer, parachuting in behind enemy lines on the night before D-Day.

The idea for Arthur Kingsley is based upon the real British soldier, Sidney Cornell. Born to an African American father, Cornell came from Portsmouth, Hampshire. He joined the Royal Army Service Corps during the early years of WW2 while volunteering for the airborne forces. After completing a parachute training course, Cornell qualified as a military parachutist. It was then that he was posted to B Company as part of the 7th Light Infantry Parachute Battalion.

His most notable mission was during the night before D-Day, just like we see Kingsley perform in the Vanguard gameplay. Cornell parachuted behind enemy lines on the night of June 5th 1944. He then spent five weeks in almost constant danger, serving as a company runner carrying messages between British outposts.

For the bravery exhibited in his D-Day mission, Cornell received a Distinguished Conduct Medal. He was injured twice on his message excursions, taking fire from enemy machine guns and mortars. He took his several injuries in his stride, never failing to relay a single message.

Sadly, Cornell died on the battlefield before the end of WW2, shortly after he received a promotion to Sergeant. While advancing through Germany in 1945, he was ordered to cross a bridge in Petershagen that was rigged to blow up by the Germans. The detonation killed Cornell and 26 other members of the battalion on the night of April 6th 1945. Cornell was initially given a field burial next to the bridge, however now resides in Becklingen War Cemetery in Germany [via ParaData].

Lt. Polina Petrova is a Soviet nurse turned soldier after her home city of Stalingrad is invaded by Nazi forces. Her backstory is inspired by the war legend, Lyudmila Pavlichenko, who remains the most decorated female sniper in history. She’s nicknamed ‘Lady Death’ with 309 confirmed kills to her name.

Pavlichenko was born in Ukraine in 1916. She quickly found confidence in herself, constantly proving that women like herself were just as capable as men. At a young age, Pavlichenko enrolled in a sharpshooting class, earning several decorations and marksman certificates. She eventually attended Kiev University, but maintained her marksman skills by attending sniper classes during her studies.

When Hitler began to invade the Soviet Union in 1941, Pavlichenko enlisted herself in the Soviet infantry. Initially, the registrars encouraged her to become a nurse, but Pavlichenko would have none of it. She ended up becoming one of 2,000 female Soviets to serve as snipers during the war.

She fought on the front lines at the Battle of Odessa to begin with. There, she racked up 187 confirmed kills and earned the rank of Senior Sergeant. From there, she retreated to the city of Sevastopol which was held under siege for eight months. Her kill count rose significantly in that time to 257. That earned her the rank of Lieutenant.

Pavlichenko was eventually withdrawn from the front lines in June 1942 when shrapnel from mortar fire struck her in the face. She made a full recovery, but never returned to the front lines. By that point, she’d racked up 309 kills and became the face of the propaganda mill.

Pavlichenko lived until 1974 when she passed away after suffering from a stroke. She remains the most successful female sniper to have ever lived [via The National WWII Museum].

Cpt. Wade Jackson is an American Fighter Pilot who is influential in the Battle of Midway. That was a major naval battle that took place in the Pacific in June of 1942. It’s a battle that we’ll likely get to experience first hand in Vanguard’s Campaign.

The inspiration for Jackson comes from Lt. Vernon ‘Mike’ Micheel. Born an American dairy farmer in Iowa, Micheel had only just entered flight school when WW2 began. He quickly showed an aptitude for flying, and ended up getting stationed upon the USS Enterprise. The Enterprise was one of the only aircraft carriers that the US Navy had at that time, and it proved influential in the upcoming Battle of Midway.

Micheel flew a Dauntless dive bomber flawlessly during the Battle of Midway. He ended up landing several direct hits on the Kaga class carriers that the Japanese were using. For his efforts in the Battle, Micheel was awarded the Navy Cross. By the end of the war, he earned an additional three Air medals, a gold star, a presidential unit citation, and a Distinguished Flying Cross.

Micheel is a renowned fighter pilot, mostly because his story is featured in the popular WW2 book titled ‘The Pacific’. The book follows the stories of five individual WW2 soldiers as they island hop their way closer to the shores of Japan.

Micheel passed away only recently at the age of 92. He died at home in Atlantic Beach, Florida in 2010 [via ThePacificWar].

2LT. Lucas Riggs is a part of the 20th Battalion and takes the fourth spot on the Special Forces squad in Vanguard. His backstory sees him fighting mostly in North Africa, where he’s known to run across the battlefield with only a bag full of grenades.

His real life inspiration is Charles Upham, perhaps the most famous soldier from New Zealand. He was born in Christchurch in 1908 and joined the Expeditionary Forces shortly after the war began in 1939. From there, he took part in several influential battles throughout WW2. For his leadership efforts in the Battle for Crete, Upham received the Victoria Cross. He received the medal yet again one year later after fighting at Ruweisat Ridge in Egypt.

After exhibiting tremendous efforts on the battlefield, Upham was wounded and captured by the Germans in 1942. He attempted to escape on numerous occasions, which led to him eventually being held in the infamous Colditz prison in 1944.

After the war ended, Upham returned to live a life of farming in New Zealand. He lived a peaceful life there until he sadly passed away in 1994. He remains one of only three people to have ever been awarded the Victoria Cross twice [via New Zealand History].

It’s fascinating to research the achievements of these four soldiers. Knowing that they were influential in the creation of Vanguard’s protagonists will surely bring a touching human element to the campaign. It’s certainly made me more eager to get my hands on the game when it launches on November 5th later this year.

Are you excited for Call of Duty Vanguard? Tell us your thoughts on our social channels.

Call Of Duty: Vanguard Lets You Choose Between A Swastika Or The Iron Cross