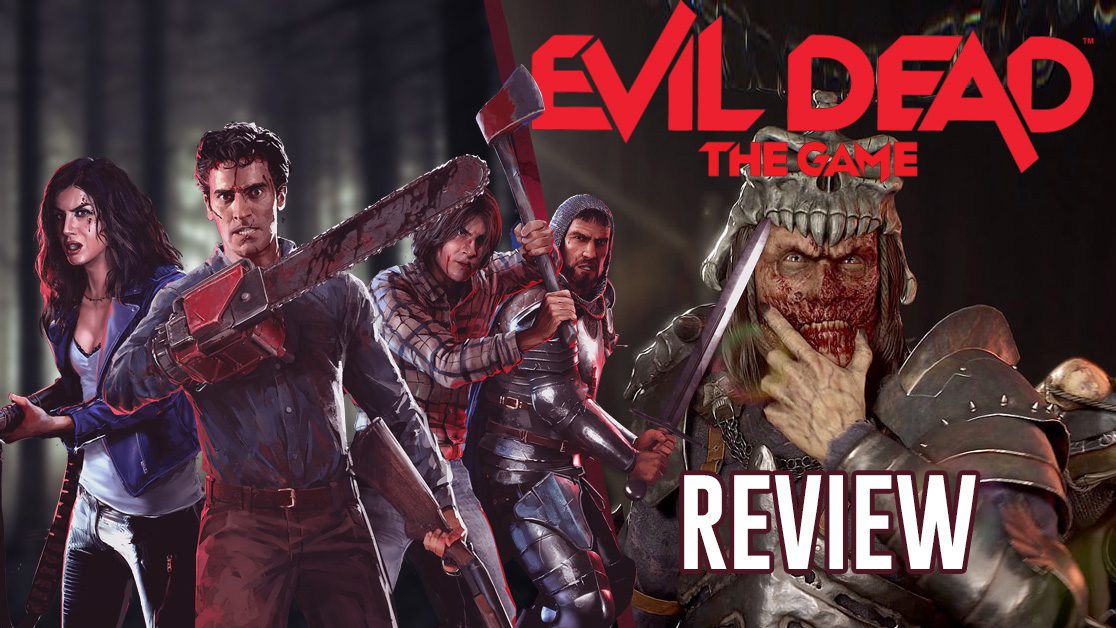 When I first approached Evil Dead: The Game, I was afraid it would end up as another Friday the 13th. Some great ideas on paper, but perhaps leaning too far into Dead By Daylight territory without really innovating anything too new and exciting. Thankfully, it’s abundantly clear in your first few hours with the game that this is a much different experience.

Still retaining the 4v1 multiplayer format a lot of asymmetrical multiplayer games take on these days, a team of survivors complete a series of objectives based around finding the Necronomicon (“Book of the Dead”) and Kandarian Dagger to repel the forces of the undead. Meanwhile, another player takes on the role of the Kandarian Demon, with the aim of stopping the survivors from achieving their goal.

With Dead By Daylight, your experience is very much a survival horror one. The killer is this all-powerful, seemingly unbeatable abomination, and survivors have limited ways to fight back against this unstoppable evil. But with Evil Dead, the game puts a much bigger emphasis on the action elements from the movies.

It’s quite brilliant to see just how well Evil Dead’s whole vibe translates to a multiplayer game format. From Evil Dead 2 onwards, the movies presented a mesh of comedy, action, and horror in one neatly-wrapped package. Having rewatched the original trilogy recently, it’s amazing just how quickly you can go from being spooked, to thrilled, to roaring in laughter.

This is exactly the kind of experience the game exhibits. I blast away two Deadites with a shotgun, carve another in half with a chainsaw, only to be confronted with a surprise tree attack. These are moments that feel directly lifted out of the movies. There’s that line between making something compelling to play and making it so ridiculous it’s difficult to not enjoy yourself, and Evil Dead: The Game toes that line perfectly.

This also extends to the game’s singleplayer missions, each one being inspired by a different moment from the Evil Dead movies or TV series. The first mission is pretty much an exact replica of the opening of Evil Dead 2, complete with Ash taking his girlfriend’s head to the work shed to defeat the evil within her.

These missions serve as an alternative to those who don’t want to play multiplayer, but they’re not perfect. They can be quite long and difficult, and with no checkpoints available it can make for quite a frustrating experience. I haven’t even been able to beat the third mission.

While this isn’t a massive dealbreaker, as I’m sure most people are buying Evil Dead: The Game for its multiplayer, it’s a shame that a lot of unlockable characters, cosmetics, and other extras are tied to the singleplayer portion. So if you want to unlock Old Ash or Pablo (my favourite character from Ash vs. Evil Dead!), you’re forced to play through these missions. Adding some checkpoints and a difficulty slider might have helped here.

I can safely say that I’m enjoying my time with Evil Dead: The Game, however it still comes with a whole myriad of technical and design issues. The way the game rewards XP is a big problem right now. I’ve been in games where survivors were close to winning, so the Demon player rage quits and prevents them from earning victory XP. It also feels like progression is very slow at the moment; after about ten victories in multiplayer matches, my character only levelled twice.

But the more glaring issues with the game are the bugs. There were many moments where I got stuck in the level geometry. I hopped out of a car and managed to get stuck inside a tree, unable to move anywhere. There doesn’t seem to be any precautions in place to get players out of this mess, besides disconnecting from the match. There isn’t even a jump button, which creates its own stresses.

There’s also a nasty bug I’ve experienced twice now where I couldn’t attack, use items, or revive players. I was able to continue moving around, but was very limited in what I could actually do. From seeing online chatter about the game, it seems this bug is common and happening to other players a lot too.

I’m really enjoying my time with Evil Dead: The Game, but it feels like a game that will be a better recommendation after some patches and a few new pieces of content. It could really do with a few new maps that have drastically different themes, because after 15 hours or so of playing, I’m a little tired of being in the woods.

Yes, I know, Evil Dead as a series is mostly just people in the woods being attacked by demons in the woods. But there are many more diverse locations also featured throughout the series; Where’s Castle Kandar? How about Elk Grove, or S-Mart, or even just Hell itself? There were so many opportunities to include new locations here, and only shipping with two similar maps makes it a bit of a letdown.

On the other hand, the game’s character options are pretty impressive. Four versions of Ash Williams are available to play as, each one with different weapons and abilities available, and Bruce Campbell even returns to do the voice with all the charm, wit and integrity he brings to the role each time he does.

But there are also plenty of characters from the films and show that fill out that backlog too. It’s great to see iconic figures such as Kelly, Scotty, and even Henry The Red (“well hello mister fancy pants!”) be playable characters, but the lack of Mia from the remake leaves a lot to be desired.

Am I just nitpicking here, as a big Evil Dead fan? Possibly. However, I feel the criticism is warranted. A lot of people picking this game up will also be fans of the franchise. In my interactions with other players in this game, we’ve each bonded over our love for the thing Sam Raimi and Bruce Campbell created way back in 1981.

We’ve shared our favourite quotes, discussed which of the original trilogy is the best, and even given out controversial takes on the remake. I don’t know of many games that have brought people together quite like that. As someone who rarely communicates like this in multiplayer games, it’s been quite an interesting experience.

Despite its faults, I think I’ll be coming back to Evil Dead: The Game quite often. It’s got a solid foundation for asymmetrical multiplayer that doesn’t tread on the toes of its competitors, while also remaining a fun and cohesive adaptation of the source material.

For our Evil Dead: The Game review, a PC copy was provided by Sandbox Strategy PR.

Do you agree with our review? Let us know across our socials, like our Twitter or our Discord. Or check out our other latest reviews, like for Ghostwire Tokyo or Tiny Tina’s Wonderlands.