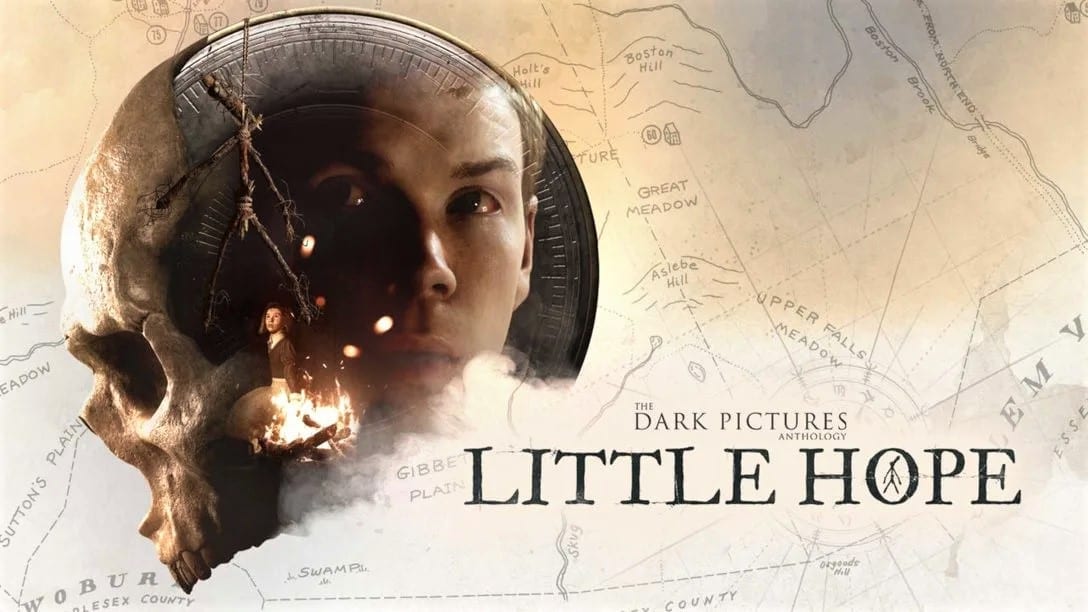 Don’t worry, I’m not going to give anything away about Little Hope that you won’t have already seen from a trailer, so I’ll keep this section brief. A blend between Silent Hill and American Horror Story: Roanoke, Little Hope definitely delivers with its creepy story which always leaves you wanting a little more (in a good way!). The game is completable in just a handful of hours (depending on your choices), which seems the perfect length for the story it’s telling. It’s not dragged-out slow, it’s not super-speedy fast; the pacing is excellent and lends well to the experience as a whole.

Little Hope features a range of new characters who find themselves lost in the foggy and terrifying town of Little Hope after their bus crashes, so we’re again dealing with a group of mostly teens. Though the overall story was fun and riveting, the dialogue between some of the characters (and the dialogue options you can choose from) sometimes made little-to-no sense. Where Until Dawn made fun parodies of their characters, Little Hope plays out more like a bunch of stuffy adults trying to write for teens. You could argue there’s good reason for this, though it’s definitely jarring in places.

I can wholeheartedly say, without a doubt, that Little Hope is one of the prettiest games on PS4. At points I genuinely felt that I was playing a next-gen game, with streetlights reflecting off the dark puddles, fog swirling in the distance and torchlight actually burning my eyes thanks to the impressive HDR. The facial animations are a massive improvement from Man of Medan, and although the walking animations are still a little puppet-like, this is a huge step-up for Supermassive.

Style-wise, the game falls on the typical dark and gloomy streets and houses of an abandoned spooky town, but the darkness is balanced with older, brighter sequences of witch-killings from the 1700s. Again, not going into spoilers here, but Little Hope is a wonderfully beautiful game, with lots of moments to make you go “oooh!” at its shiny, prettiness.

Playing through Little Hope and marvelling at its graphics gave me the first solid hope that a new Silent Hill game could be good – at least if it looked a tenth as good as Little Hope does.

Little Hope’s gameplay will be familiar to anyone who’s played either Man of Medan or Until Dawn. The perspective switches between characters, and you’ll have to explore, make narrative choices and be speedy with QTEs to ensure everyone you love stays alive. Little Hope features a similar Premonition mechanics to its predecessors, but will now warn you when a QTE is coming up. It’s helpful, sure, but it would be nice to turn this off for a more immersive experience.

Little Hope also shows the locked traits of characters who’ve died, which was a little odd to me. After watching a death animation, the screen would say something like “Indecisive” with a lock symbol – did this mean that had I unlocked this trait through my decision making I’d have saved them? Or did it mean the total opposite?  Odd and unexplained, it didn’t tarnish my experience, but was just a little confusing.

Another slight issue with the gameplay was the Bearing updates. Making an important decision would prompt you to check your Bearing screen to see an explanation of your decision. Sadly, this would give you slight spoilers just seconds before they played out on screen. I fell for this several times before abandoning the Bearing screen all together. Delaying the prompt by just a couple of seconds would have saved me from spoilers, but alas, the timing here is a little whack.

Is Little Hope fun to play? Heck yes! The perfect game for my Halloween 2020, I played it through in two sittings, and loved almost every second of it. The design, the story and the plot twist were all executed very well, and I found myself jumping into the discussion online to talk theories and see alternate endings. Little Hope gave me (almost) the same joy Until Dawn did, though this was more like a starter than a main course. Was I ever scared? Hmm…no. One jumpscare did get me pretty good, but although the atmosphere of the game is creepy and cloying, it never quite reaches the feeling of terror.

Little Hope has the best Accessibility options of any Supermassive game to date. For the first time you can now tailor QTEs to suit your skill level, even disabling their time-outs completely – something which is going to make the game a lot more playable for a lot more people.

You’re now also able to select “Hold Input to Complete Repeated Actions,” which is going to be a game-changer for players with mobility issues. Other options include a dyslexia-friendly font, background opacity for subtitles, subtitle sizes and colours – and more.

We love when a game we review has excellent Accessibility options and The Dark Pictures Anthology: Little Hope doesn’t disappoint!

Where Man of Medan (slightly) failed to meet the standards set by Until Dawn, The Dark Pictures Anthology: Little Hope comes closer to what I wanted to see from these games. Though it’s not quite the fun-filled, horror-fuelled romp that Until Dawn gifted us with, it’s a lot more spooky and immersive than Man of Medan. Little Hope is a must-play for horror fans, and it’s one totally deserving of a place in your games library.

The Dark Pictures Anthology: Little Hope is available now on PS4, Xbox One and PC.