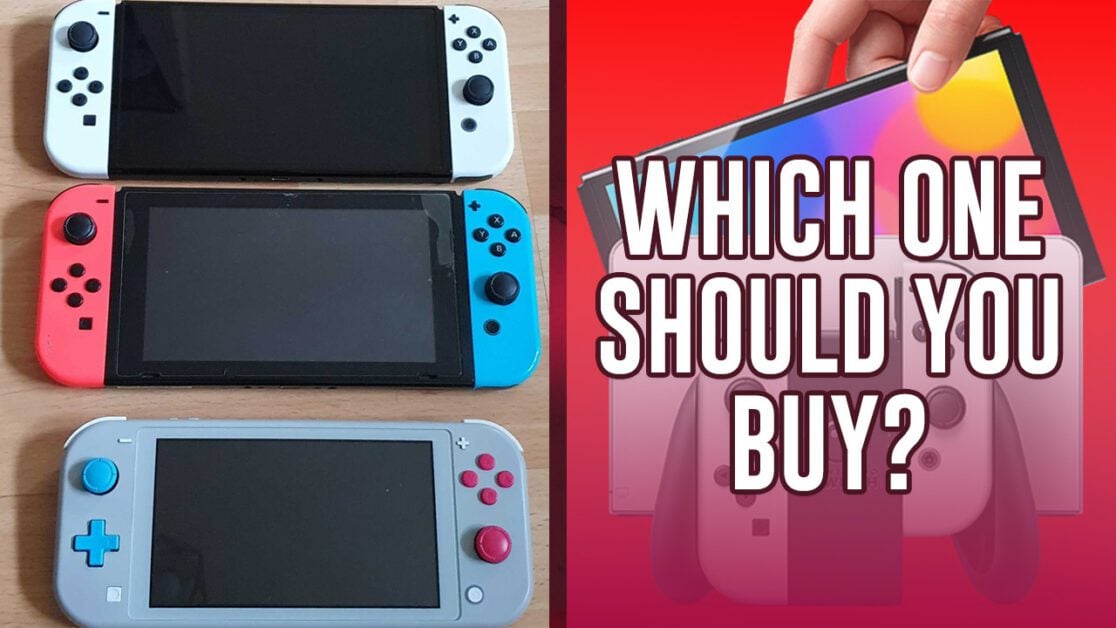 Since its release in 2017, the Nintendo Switch has transformed home and handheld console gaming. It’s been a huge hit for Nintendo – with over 89 million consoles sold worldwide, it’s safe to say that this best-selling console has something special very about it.

Two years later, the portable-only Nintendo Switch Lite was released to cater for those who prefer smaller, lightweight gaming on-the-go. Now, Nintendo’s brand new OLED model of its Switch lineup is hoping to boost that sales figure even further. With its gorgeous new bright screen, stylish white joy-cons and deep, rich colours, the OLED is an immersive, impressive piece of kit.

With such an array of consoles, you might be wondering: “Hey, which one should I get?”. Another question you may have, if you already own a Switch console, may be: “Is it worth upgrading”?

The overwhelming opinion of many outlets has been to “skip the OLED if you already own a Switch”. Which is understandable – it’s a hefty price jump for a very similar console. But if you share the same love of handheld gaming as me, then hear me out. The Nintendo Switch OLED might just be what this beloved Nintendo console should’ve been at launch. I now own every Switch model and here are my thoughts.

SWITCH vs OLED vs LITE – SCREEN

The first, and most obvious upgrade, is the OLEDs’ gorgeous upgrade to screen and display. The original Nintendo Switch boasts a 6.2-inch LCD, which was always a point of contention for critics in the past. The Lite has a 5.5-inch LCD, which is great for portability but is, again, a little on the smaller side.

The OLED model has a 7-inch OLED panel, and that extra 0.8 inches makes all the difference. The colours on the original and Lite’s LCD screen quite literally pale in comparison to the rich vibrancy of the OLED screen.

The new Switch OLED is brighter, bigger and overall more impressive than any other handheld console on the market. If you play your Nintendo Switch in handheld mode most of the time, the OLED is well worth trying out.

SWITCH vs OLED vs LITE – AUDIO

Perhaps the most understated, but immediately impressive thing I noticed when hands-on with the Switch OLED was the incredible sound quality. Tucked away in the sleek chassis are some improved speakers, which will be great news for those who play in handheld mode frequently. Whilst none of the Switch models have surround sound yet, it’s still nice to play on a handheld console that immerses you to the level the OLED does.

SWITCH vs OLED vs LITE – THE DESIGN

The biggest upgrade you’ll notice to the Nintendo Switch OLED is the reduction of bezels surrounding the screen. I found, once you go hands-on with the OLED, it’s very hard to go back.

Other than that, Nintendo hasn’t made too many big changes to its iconic console design. The small adjustments they have made, however, add up to make a big quality of life difference. The wider kickstand, which now runs the length of the console, is a game-changer for tabletop mode. Whilst I find it a little harder to flick out than the original, the adjustable angles and more stable tabletop mode more than make up for it. And, of course, the Lite has no kickstand at all.

One area where the original and Lite stand out is the tactile feedback of the smaller power button at the top. The OLED has a much larger power button, which I find feels very uncomfortable to press.

However, the design of the console remains very similar to what gamers have come to know and love over the last 5 years.

SWITCH vs OLED vs LITE – INTERNALS

Something important to address is the rumour of a Switch Pro coming to the market. Prior to its announcement, many fans thought that the OLED would be a 4k upgraded version of the original. However, this was not the case. Despite the upgraded screen, all three models of the Nintendo Switch have the same NVIDIA Tegra X1 processor inside.

This means that the performance is also the same in docked or handheld mode across the range. However, I’ve never found significant problems with loading times, nor have I had frequent performance issues with any Switch console, and the OLED is the same.

Unfortunately, this also means that it’s a steep price to pay for a new-gen console when compared to the Xbox and PS5. Both of these consoles have a 120hz refresh rate and can output in 4k, which means smooth, immersive graphics. The Nintendo Switch OLED is still stuck at 60Hz – a shame considering the price point.

SWITCH vs OLED vs LITE – EXTERNALS

Whilst the internals haven’t changed, some external factors swing it. The OLED’s dock now comes with an ethernet port, which is a godsend for online gaming. No longer will your Wi-Fi let you down in an online match. Best of all, this dock can be bought separately and functions with the original Switch. Of course, the Lite is designed for handheld gaming, so isn’t compatible with a TV dock.

Nintendo has also improved the storage capacity of the OLED, from 32GB to 64GB of internal memory. You can now keep practically double the number of games on your system without buying a microSD card.

Despite the larger, brighter screen, Nintendo has managed to keep the OLED consistent with the second-generation original Switch. This will give you between 5 and 8 hours of playtime.

The Nintendo Switch Lite’s battery life is approximately 3 to 7 hours. I’ve had a first-gen Switch since 2017, which never excelled in battery life. It lasts for anywhere between 2.5 to 6.5 hours depending on the game you’re playing. Nintendo did release an updated Switch in August 2019, which boasts a battery life of 4.5 to 9 hours. However, in the interest of fairness, I’ll keep comparing the OLED to the 2017 version.

SWITCH vs OLED vs LITE – PORTABILITY

One of my favourite things about the Nintendo Switch is the fact it works around your lifestyle. Whether you’re on the go, or sat on the sofa munching your way through a sharer bag of crisps for tea, the Switch is perfect for you. The OLED is pretty chunky, which makes it a bit of an issue to cart around with you on-the-go. If you’re looking for portable gaming, the Lite, coming in at approximately 3.6 inches high, 8.2 inches long, and .55 inches deep and weighing 277 grams, is still the best.

The OLED is marginally larger than the original console, with only a 0.1 difference in length (9.5 inches long). Hey, it makes the difference. I have small hands, so I find the OLED handles a lot clunkier. With Joy-Cons attached, the original is approximately 4 inches high, 9.4 inches long, and 0.55 inches deep.

The OLED weighs in at just over 420 grams, compared to 400 grams. This might not seem like a lot, but that slight extra weight is felt when holding both at the same time.

SWITCH vs OLED vs LITE – PRICE

The OLED is certainly a pricey piece of kit. At time of writing, the standard Switch will cost you around £275, with the Lite coming in at £215. Compared to the OLED, which costs an average of £309, it’s a matter of personal preference whether or not you think that’s worth it. This is, of course, without any games.

SWITCH vs OLED vs LITE – VERDICT

The OLED feels like what the fabulously flexible Switch should have been all those years ago. With its vivid colours, improved audio, classy exterior and bright screen, it’s genuinely a joy to play.

The question comes when you factor in the possibility of Nintendo releasing a ‘Switch 2.0’ in the future; one with updated performance from more RAM and a faster refresh rate. Of course, Nintendo have said they currently have no plans to release an updated model. A recent Bloomberg report predicts that a 4K Switch is expected to release “late next year at the earliest”. It claims that anonymous developers are working on 4K Switch games to release “during or after the second half of next year”. But Nintendo has rejected this report, claiming that it is “false”.

Money no object? I’d highly recommend upgrading if you find yourself playing in handheld or tabletop mode. If you play docked, stick with the original. If you’re looking for an on the go handheld, the Lite is still my go to.

A Nintendo Switch OLED was provided to GameByte by Nintendo for review purposes.